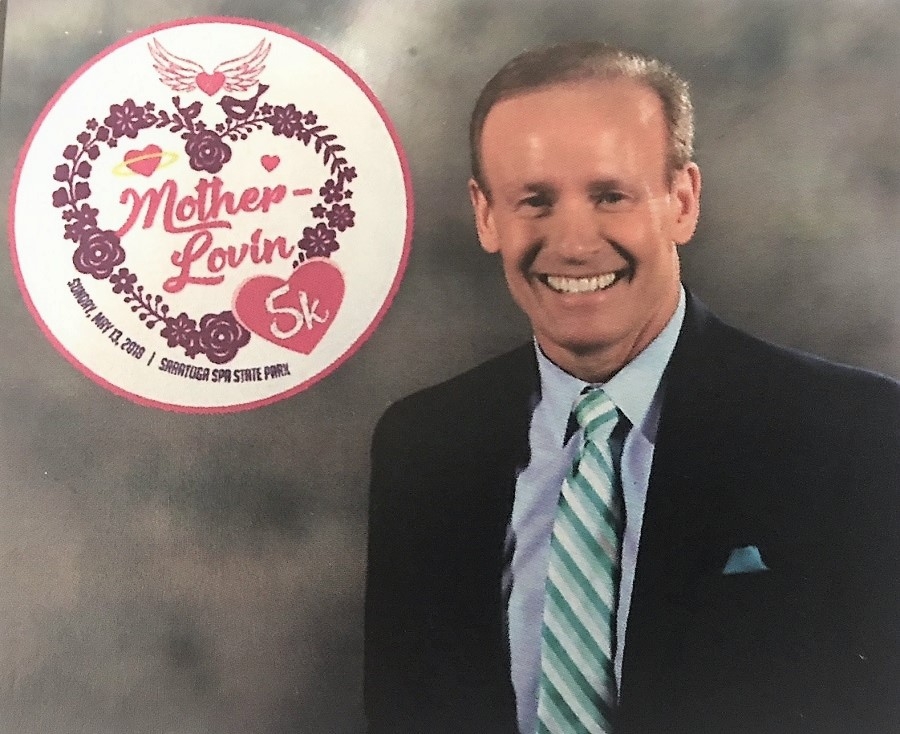 SARATOGA SPRINGS – A charity organization founded by a local reporter to honor his wife has become a popular annual Mother’s Day event to aid families who have suffered a loss due to cancer, as well as those currently engaged in fighting the fight.

Kelly's Angels Incorporated, was conceived by WNYT-TV reporter, Mark Mulholland, in memory of his late wife, Kelly, who lost her battle with cancer in 2007 at the age of 37. On Sunday, May 13, the organization will stage Kelly’s Angels Mother-Lovin’ 5K in the Saratoga Spa State Park, which invites men, women and children of all ages and abilities to participate in the name of helping children who’ve lost a parent or sibling to cancer. The event - Kelly's Angels Inc. big fundraiser of the year -typically attracts hundreds of families and more than 1,000 people overall.

“Being a sole surviving parent, I can empathize with anyone who is going through this,” says Mulholland, whose son Connor just turned 18 and will be graduating from Saratoga Springs High School in June. Daughter McKenna is 16. “Knock on wood they’re good kids. I do feel like I have very special bond with the children, so I feel fortunate in that way. I don’t think there’s a day that they don’t miss their mom, but I think they’re gratified as I am that we’re helping other kids.”

The organization’s “Fun Grants” have helped more than 100 kids in the region under the age of 18 who have lost a parent or sibling to cancer. The donation allows children to do a fun activity of their choosing. Some have made a trip to a Major League Baseball game or had a backyard bouncy house party; others have enjoyed a day at an amusement park, a Rangers’ hockey game in New York City, a Broadway show. One young girl received a puppy that her dad always wanted her to have.

“Our original mission was to help children who have lost a parent or a sibling to cancer by providing ‘fun grants.’ We’ve expanded our mission to include scholarships for children who overcome adversity and were also going to help families who are in a current battle with cancer, who are devastated by an insidious disease,” Mulholland says.

A family in Queensbury were notified just before Christmas that the father was diagnosed with colon cancer and having a very difficult time. “We provided them $1,000 so they could provide Christmas for the kids. That sparked the whole idea of what we call ‘Angel Aid.’ And we’re finding a lot of people who need help,” Mulholland says. “We’re giving aid to families who are in the throes of the battle. Whether it’s because they can’t work, or because of costs associated with medical care, or in need transportation - those sorts of things. We decided not just help families who have suffered a loss, but also those who are fighting the fight.”

This year marks the third time the organization will give scholarships to a boy and a girl, who are graduating seniors at Saratoga Springs City Schools.

“Kelly taught third grade at Saratoga Springs City Schools before she passed. We started with that school and chose a boy and a girl who have overcome adversity, demonstrated a need and demonstrated a commitment to helping other kids and who are going to an institution of higher learning, so, those are our primary criteria. Now we’re expanding that. Our goal is to give scholarships throughout the Capital Region,” Mulholland explains. “It’s a pretty lofty goal, but people have been very generous and very giving to the organization, so maybe we can do it. This year, in addition to Saratoga Springs, we’re adding Queensbury – because Kelly taught there for a time, and Hoosic Valley in Schaghticoke.”

"The scholarship really means a lot specifically coming from his family and knowing what they’ve been through,” said Harry Lazar, a senior at Saratoga Springs High School, who this week was informed he is one of Kelly’s Angels 2018 scholarship recipients.

“Growing up, I lived with my mom. I never knew my dad. My mom, she had a lot of mental issues. She was a great person, but she had a lot of problems. She hit a breaking point and broke down. It made my life pretty difficult, but I always had my grandparents who helped me, and I always had my friends, which was nice, so I got through it because I had a good support group around me,” said Lazar, who will be heading to the University of Virginia where he’s anticipating study either economics or psychology.

“I needed to fix her. My childhood was slipping away… (but) It didn’t work. She was too far gone.” Harry’s mother died when he was in his sophomore year. His anguish, over time, has been transformed into something else. “When stripped at its core, what was once guilt revealed itself as the last gift my mother ever gave me: purpose.”

“I’ve had to work for a lot that I have. I really think I’ve developed a good work ethic and a thick skin to face whatever life has to offer. I know from here on out, going to college, things are just going to get more challenging, but I feel I’ve been given an advantage to have a good shot of doing well.”

What would Kelly Mulholland think?

“I think she would have a huge smile on her face because kids were her passion. The fact that we’re expanding now and giving out scholarships – I think she’d be thrilled,” Mark Mulholland says.

The 6th Kelly’s Angels Mother-Lovin’ 5k Run/Walk takes place Mother’s Day, Sunday, May 13, in the Saratoga Spa State Park. Race Day Registration/Packet Pickup: 7:30 - 8:30 a.m. Activities step off at 8:45 a.m. with a Kids’ Fun Run, where children under 9 years of age race toward the finish line with moms and dads rooting them on, or running alongside. Online registration is $30. Day of race registration is $35. Awards will be given to the first and second overall male and female winners as well as first, second and third place male and female winners across 8 different age groups. Register HERE.

Donations may also be made and go directly to fund "Fun Grants" for children who have lost a parent or sibling to cancer. Online donations may be made at: http://www.kellysangelsinc.org/donate/. Checks may be sent to Kelly's Angels, Inc., P.O. Box 2034, Wilton, N.Y. 12831.

More in this category: « Blood Drive Monday at City Center Neighbors: Daniel Chessare »
back to top