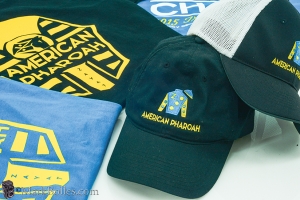 SARATOGA SPRINGS – When Matt Cummings, 32, and his graphic design business partner, Mike Miakisz, 31, put together a logo for American Pharoah this spring; the 3-year old colt had just dominated the Arkansas Derby, a key prep race for the Kentucky Derby. Little did they know they were designing what would become one of the most popular t-shirts of the summer racing season.

“He was one of the best 2-year olds last year,” said Cummings, co-owner of Ascot Creative with Miakisz. “Then he had a small injury and missed the Breeders Cup. When they brought him back this year and we watched him win a couple races, we knew that was the horse.”

Cummings and Miakisz, who have known each other since grade school, are Saratoga natives with a natural love for horseracing. Both went to college for design, settled into steady careers, and Miakisz started a family, but they both wanted just a little bit more from their American Dream. So over the last couple of years, they began a small entrepreneurial venture on the side, Ascot Creative, designing apparel for horseracing fans that would feature a particular horse or stable on t-shirts, hats and other items.

“We kinda know which are the popular horses in the horseracing fan base,” said Miakisz, “so we try to reach out to their owners and set up a licensing agreement to sell merchandise with their horses and stables on it. It benefits us, the owner, the stable, and horse racing fans in general.”

The two lifelong friends had no idea when they reached out for the licensing agreement on American Pharoah that they were creating a design for the horse that would win the Triple Crown for the first time in 37 years. Ascot Creative sales went up after the Kentucky Derby, then American Pharoah won the Preakness, sales went up again, and the rest is history, both for the horse and the entrepreneurs.

“There’s no comparison to what we did last year,” said Cummings. “I didn’t think going into the Kentucky Derby that we’d sell a hundred shirts, and didn’t even know what to expect. We had to come up with a new design after he won the Triple Crown, but we’re at about 600 for him and still going. Not only that, we are selling other shirt designs and hats, like Texas Red.”

The sales are all derived online at AscotCreative.com, through promotions on Facebook and Twitter. “It’s really amazing,” Cummings said. “We’ve even gotten orders from Australia, Japan and England.”

Both men feel good about the future of their design business. “This year we’ve established a relationship with some big-time owners,” said Miakisz, “which gives us some credibility with other owners, something we didn’t have before. And [American Pharoah’s] win has gotten our name out there to horseracing fans. We’ve had a great response.”

In one of the most unconsciously revealing statements I've ever read from a politician, Mayor Yepsen stated her true priorities in her May 14 press release:

“As Mayor, my utmost priority remains the horse racing industry . . . and I continue to take great pride in having an excellent working relationship with Saratoga Casino and Raceway.” She repeated that exact phrasing in the Council meeting on May 20th.

Her “utmost priority” is the racing industry? Really? That's incredible, and alarming. Her “utmost priority” should always be the health, safety, and well being of the citizens of Saratoga Springs! And she should be responsive primarily to the overwhelming majority who opposed casino expansions, not a particular industry.

Her statement was in response to a letter from the NYS Gaming Commission claiming lead status in the SEQRA (State Environmental Quality Review Act) process about the proposed Racino expansion, and noting the City's status would be "interested" (demoted from “involved,” by Racino maneuvering), reducing the City's say in the process.

Mayor Yepsen has not publicly released the consent form that came with that letter that asks us to agree or disagree, and why. The Mayor said one attorney told her that we couldn't win a lawsuit to gain control over the process or lead agency status. There are good arguments why we should have both, but she's not making them.

Even worse, she and the Planning Board (which is part of the Mayor's Department) have refused to discuss a legal opinion by Young/Sommer, a law firm specializing in land use issues, that states that the City and Planning and Zoning Boards can have jurisdiction over the Racino expansion - and therefore can not only have lead status in the SEQR process, but can approve or deny the Racino plans if they are not consistent with our zoning or comprehensive plan. The Mayor and Planning Board have abdicated our right to control what is built in our city.

She said she has an “excellent working relationship” with the Racino, a corporation that is working with the Gaming Commission to “cram down” our throats an expansion that we don't want; one that would hurt our Downtown, City Center, and SPAC? (That's what this type of State imposition is nicknamed -- a “cram down!”)

Considering that the March 4th City Council Resolution objected to the Racino expansion, and stated that the City should have the right to control any construction within its borders, the Mayor's position and statements are contrary to that Resolution.

Maybe the over $10,000 in political contributions she's received from casino and racing interests has affected her priorities. But it doesn't matter why she puts the racing industry as her “utmost priority,” and that she's helping a gambling corporation prey on the City she's supposed to protect and serve. It's just wrong. Her priorities are seriously out of whack.

The Mayor is not fighting for us. So we have to pressure her, and the Council to fight for our right to control our City.

SARATOGA SPRINGS — The Saratoga Race Course is going to be the place to be this summer with new, exciting giveaways, larger purses and the anticipated appearance of the Triple Crown winners Orb, Oxbow and Palace Malice. There will also be a free shuttle service from the Saratoga Casino and Raceway, new food vendors and limited twilight races.