SARATOGA SPRINGS – Any municipality preparing to host a major event such as baseball’s World Series, a World Fair, or a visiting monarch would do well to reach out to the public and private leadership in the City of Saratoga Springs for a bit of advice.

Every year, without fail, the City hosts hundreds of thousands of visitors from all over the world during Saratoga racing season, a feat requiring constant communication and smooth, dance-like coordination between stakeholders to pull off.

This year, with racing’s own visiting monarch in the form of Triple Crown Winner American Pharoah, plus Earth, Wind, and Fire and Chicago performing Saturday evening at the Saratoga Performing Arts Center (SPAC), crowds could reach 100,000 people on Travers Day, August 29, but the experienced small city in the country is more than ready.

“We definitely have more staff on duty than we normally would,” said Gregory Veitch, chief of police of the Saratoga Springs Police Department. “We anticipate it being one of the largest track sizes that we have seen in a long time. It’s going to be a big deal and we’ve been planning this for quite some time. There will be an increased presence by all law enforcement, emergency medical and fire. We aren’t doing this in a vacuum.”

In the century and a half of summer racing seasons, successful public safety and coordination at local, state, and federal levels has played an important role in keeping fans and visitors returning year after year.

“A lot of thought has gone into our coordinating with other agencies, and we are very appreciative of them,” said Christian Mathiesen, commissioner of Public Safety in Saratoga Springs. “I know the sheriff’s department will be very helpful, especially with traffic. The fire department will have an increased presence, and EMS will have two engine crews instead of one and one HAZMAT truck at the racetrack. The Police Department will have some changes in the traffic patterns, and overall staff will be optimal to take care of issues at the track and throughout the City. My advice to everyone is to come early and be patient, not to expect to breeze right into the City.”

Visitors will be driving in to attend the concert at SPAC around the same time the people are leaving the racecourse after the last race, so traffic patterns may change to accommodate the increase and timing. Visitors are asked not to honk their horns, as this can startle the horses. (See page 14 for important traffic safety notices).

Public safety is just one piece of the larger entertainment puzzle put together by public and private partnerships in the City. As a destination locale, there is quite a bit of effort put into assuring everyone has a good time.

“We began talking and staying in touch as soon as American Pharoah won the Triple Crown,” said Todd Shimkus, CCE, president of the Saratoga County Chamber of Commerce. “The Convention and Tourism Bureau, Downtown Business Association, CDTA, the Mayor’s office, the Police Chief – we even talked with Amtrak the week after he won.”

Those conversations continued throughout the season. “There has been months of preparation ahead of this year’s Travers in anticipation of American Pharoah coming to Saratoga,” said Todd Garofano, president of the Saratoga Convention and Tourism Bureau. “Once NYRA [The New York Racing Association] announced that attendance would be capped at 50,000, we all turned our attention to creating and promoting viewing parties at Saratoga area bars and restaurants. Our message is that while the Travers is sold-out, Saratoga is not. We want fans to come and participate in what is a historic weekend for Saratoga. A website was created, www.2015saratogatravers.com to list and promote the viewing parties around town.”

Shimkus understood the reasons behind NYRA’s cap on attendance at the track, but said the rest of the town leaders were confident that the City could welcome many more, which is why they worked so hard to set up viewing parties.

“This is about creating an experience that people want to come back to time and again,” Shimkus said. “The cap allows the track to provide the best possible customer service to those attending, so it’s up to us to provide the best possible experience to City visitors not only to ticket holders, but for all those who can’t be there. We’re working hard locally to make sure we can accommodate everyone, that everyone has a great experience, with just the right food, the right product, and help people find hotel rooms – we are getting calls from around the world.”

Shimkus went on to say with confidence that it is not the first time the City has hosted a big crowd in Saratoga. The vast majority of businesses are locally owned by people who live here and have a sense of what they need to do to make this work. He said the process has been relatively smooth for years when it comes to preparing for crowds from a staffing perspective, food perspective, merchandise perspective, and promotional perspective.

“I don't think anyone has any idea of what it takes to host something like this,” said Shimkus. “This hasn't happened in 37 years, [Triple Crown winner]. We'll be talking about this to our grandkids. Yes, traffic is difficult, parking is difficult, getting reservations is difficult, folks might have to wait in a line, but while standing there, take a deep breath and look around and know you’ll remember this race and this moment 40 years from now. The enormity of the event will make us all a little more patient when we think about how cool this really is.” 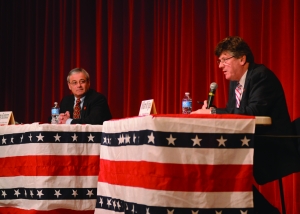 While the candidates articulated policy differences, the proceedings were notable for their civility and lack of rancor. This was due in large part to the firm oversight of the debate by LWV’s Barbara Thomas, who did make both the candidates and audience members adhere to strict time limits. This is notable in contrast to previous year’s candidate forums about city elections.

After a brief introduction of the ground rules by Thomas, unopposed finance commissioner candidate Michele Madigan (D, I, WF) took the podium for a statement about her accomplishments in office and vision for her next term.

This was followed by the candidates for commissioner of public works, in which incumbent Anthony “Skip” Scirocco (R,C) and challenger William J. McTygue (D, I, WF) sat side-by-side.

McTygue took issue with Scirocco’s record, citing in particular a deal to sell water to Wilton without full council approval and called for a total citywide evaluation of water resources, saying that “there is no long range water quality plan”.

Scirocco noted his accomplishments in office citing a “reversal of a generation of infrastructure neglect.”

Interestingly, these were the only candidates of the evening who were asked about Proposition 1—the pending statewide casino proposition. Both were generally in agreement that they were personally opposed to casinos, but noting if it passed the city would have to be ready for changes regardless of whether Saratoga Springs was designated as a casino site or not.

The candidates for commissioner of public safety easily had the most points of policy difference of the evening.

In his opening statement, challenger Richard C. Wirth (R, I, C) characterized the administration of incumbent Christian E. Mathiesen (D, WF) as “too Caroline Street focused while there is an uptick in crime citywide” and an atmosphere of “blame the victim” prevailed. Mathiesen responded vigorously, listing many accomplishments during his administration, both as leader of his department and on initiatives that were citywide in nature.

The candidates differed sharply on their plans for improving the fire/emergency response times on the city’s eastern plateau, as well as the need for an independent review of the recent police incident regarding Darryl Mount, Jr.

The differences between candidates for commissioner were less pronounced. Incumbent John P. Franck (D,I,WF), who is running for his fifth term, cited his “core four” platform as the guiding principles that characterized how he has and would run his office. Challenger John P. Arpei (R, C) did not directly challenge Franck on anything specific, but did say he was an advocate for more civility and cooperation in the conduct of city government.

Indeed, the accounts commissioner candidates agreed totally on two major issues. Both felt that a citywide reassessment was unnecessary and too costly, and that the current assessment level for condominiums (about 30 percent of assessed value) was too low. Franck cited his initiative in going to Saratoga County to try and develop a political coalition to change this formula. Arpei stated that the formula was imposed by downstate interests, where condos are more prevalent and therefore would be very unlikely to change.

Candidate Would Invest Savings back into Public Safety budget.

SARATOGA SPRINGS— Saratoga TODAY Newspaper has learned that candidate for Saratoga Springs Commissioner of Public Safety Richard Wirth (R,I,C) will announce today that, if elected, he will leave the public safety department’s Deputy Commissioner vacant at the beginning of his term.

A conversation with Wirth revealed that he plans to re-invest the annual savings, estimated at approximately $100,000 in salary and benefits, back into the department budget for items such as equipment, additional police officer or firefighters.

“In Public Safety, we have two professional chiefs running their respective departments.” Wirth said. “My intention is to be a full-time commissioner that works directly with the police and fire chiefs. A deputy position is just an additional, expensive layer of bureaucracy that the taxpayers have to pay for. I’d eliminate it.”

Wirth continued, “That money is better spent on the street, on needed equipment, technology or personnel. We need less government and more safety.”

He said he would work to establish a public safety reserve fund instead of naming a deputy. That fund would be applied to the public safety operating budget as needed.

“In this day and age, we need to make sure that every dollar that we receive from the taxpayer is well-spent. I believe this puts the money where it should be for a safer Saratoga Springs.” Wirth said.

“I’m glad Rick Wirth is announcing this bold policy,” said Saratoga Springs Independence Party Chairman Edward Miller. “I can tell you that when he mentioned this possibility at our candidate interviews, he got the whole committee’s attention.”

“It’s a common sense policy that is absolutely brilliant—making sure that tax dollars are well-spent,” Miller continued. “Hopefully, this will stimulate other politicians to really examine their budgets as if it were their own money they were spending.”