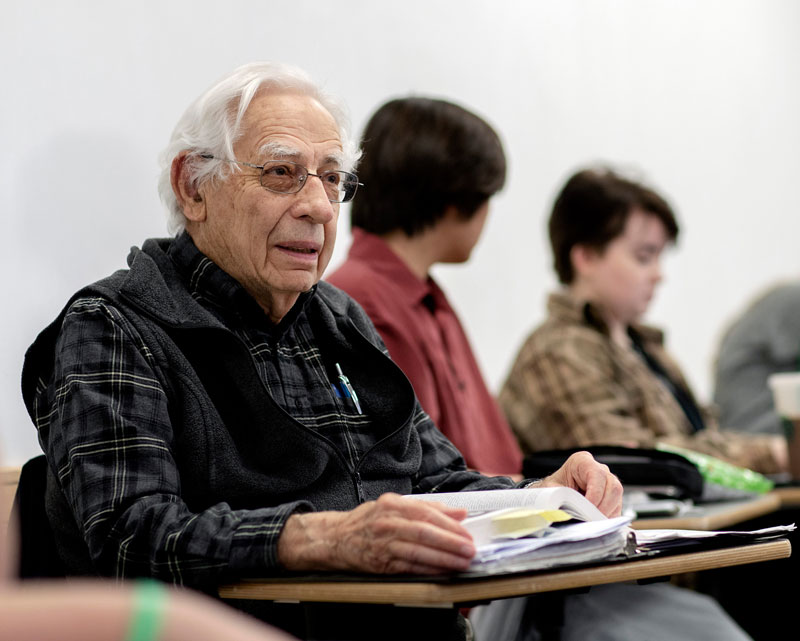 After retiring from a 40-year career as an ophthalmologist in Saratoga Springs, Dr. Taub began taking courses at Skidmore in 1994.
“I didn’t have a good liberal arts education and I decided to fill that in by going to take courses at Skidmore College,” said Dr. Taub. “It was really one of the top things to do on my list when I retired, besides travel.”
By taking a course every semester for 25 years, Dr. Taub successfully completed 150 credits from Skidmore, equating to a full liberal arts degree. Dr. Taub states that the biggest challenge he faces enrolling in school at his age is completing the reading assignments and keeping up with the younger students.
“Just that I’m older and my brain doesn’t work as quickly as the young students’ do,” said Dr. Taub.
While Dr. Taub feels that keeping up with the younger students poses some difficulty, his role in their class presents a positive influence to his fellow classmates.
“We usually think about race, gender or ability when it comes to diversity, but age is just as important,” said Kate Greenberg, a senior. “His presence added a dimension we never would have had with only people our own age. His life experience enhanced our learning.”
Most students begin to get “senioritis” as they near the end of their educational career; however, that is not the case for Dr. Taub.
“I plan to take a course every semester at Skidmore as long as I’m alive and my brain still functions,” said Dr. Taub.
It was his professor, Eunice Ferreira, who realized that the completion of her course would be Dr. Taub’s 50th course at Skidmore. To honor his stick-to-itiveness, she alerted the media, college president Philip A. Glotzbach, and had the class throw him a celebration on their last day of the semester. Dr. Taub appreciates her efforts and the recognition he received from President Glotzbach.
“Lewis has taken such good advantage of the resources we offer to the Saratoga Springs community. We’re thrilled that he has been with us for so many courses and he has no doubt contributed to each of those in which he has participated,” said Philip A. Glotzbach, president of Skidmore College.
Dr. Taub would like the people of Saratoga to know what an asset Skidmore is to the community, even beyond academics.
“I’ve already signed up for my next class, which will be (course) 51, with Gregory Spinner in the religion department.”
Read 1419 times

More in this category: « “What the Flag Means to Me” Fifth Grade Winner of Saratoga DAR Essay Contest Maple Avenue 8th Grade Students First Trip to Nation’s Capital »
back to top