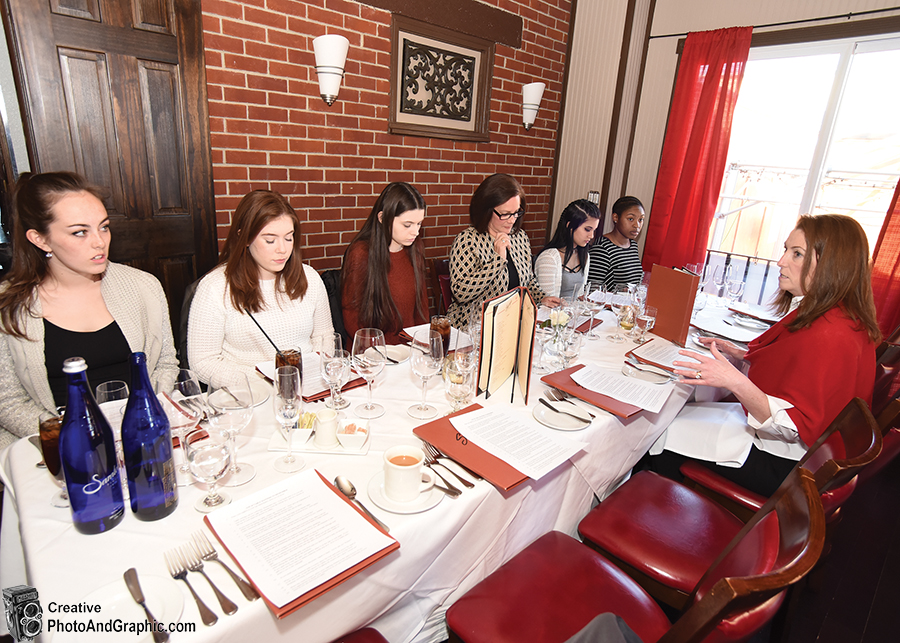 The Saratoga-Sponsor-A-Scholar program decided to do something a little different for its yearly feedback session, during which they find out what their senior students like and dislike about the program for the sake of future improvements.  Responding to a complaint that has been common from students over the years that they did not learn enough about handling certain social situations, Mary Gavin and Kristie Roohan organized an “etiquette dinner” that would help their students learn to be more comfortable in such situations, in addition to giving them an opportunity to give their feedback on the program.

Held at Sperry’s Restaurant in downtown Saratoga Springs, part of the goal of the dinner was to teach the students about restaurant etiquette, including using menus, how to order, which utensils to use, among a variety of other things.  Beyond all of that, the broader goal of the night was help the students learn to feel comfortable in social situations that might take place in environments similar to Sperry’s, whether they be meetings, interviews, parties, or any other similar sort of occasion.

“It was so much better than we could’ve expected,” Mary Gavin said of the dinner.  “They loved it.”

Students were encouraged to ask any questions they had about anything during the night, and they asked plenty, as many of them had never had experience with restaurants like Sperry’s before.  According to Gavin, questions ranged from wanting to know about certain menu items that they had never heard of, to asking if it was okay to ask to take their leftovers home.  To their credit, Gavin said that the wait staff at Sperry’s were courteous and grateful throughout the night, helping students with anything and everything they needed or wanted to know about.

The dinner also gave the program organizers their annual opportunity to solicit feedback about the program from the outgoing senior students.  According to Gavin, students expressed their satisfaction with the program as a whole, in particular with the mentors that they have been working with, while also expressing dissatisfaction with their mentors’ tendency to be gone certain days on official business, leaving them without guidance.  Gavin said that they will be taking that latter criticism into account moving forward.

Saratoga-Sponsor-A-Scholar is a ten-year-old not-for-profit program that works with “financially-disadvantaged” students in the Saratoga Springs school system by assigning them mentors who help them to finish high school and prepare for college.  Many of the students in the program end up being the first in their families to enter college, according to Gavin.

Ultimately, Gavin said that one thing stood out to her the most as a sign that the night had been a success.

“I think the highlight was we didn’t see a single cell phone the entire night,” Gavin said.

What do you think of SSAS's etiquette dinner idea?  Should more school program's teach practical social skills?  Let us know your thoughts in the comments.

All photos in this story are by PhotoAndGraphic.com.

More in this category: « Parents Push Back Ballston Spa High School Troupe Musical »
back to top