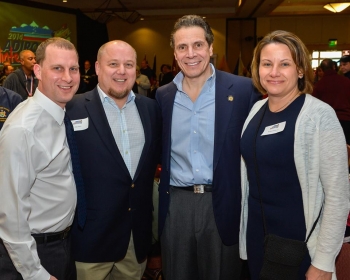 LAKE PLACID — Barbara Braidwood and Clint Braidwood, the owners of Saratoga Olive Oil Company, and district manager Peter Fazio had recently been invited to attend the 2014 Adirondack Winter Challenge in Lake Placid March 9 and met with Governor Andrew Cuomo. In their discussion with the governor, they spoke about their business. Barbara Braidwood called the governor “absolutely lovely.” “He was very excited to hear about our recent expansion to the Lake Placid area as well as our overall success,” she said. The Braidwoods own a three -year – old store on 484 Broadway as well as one in Burlington, VT. and recently unveiled their newest branch in Lake Placid.