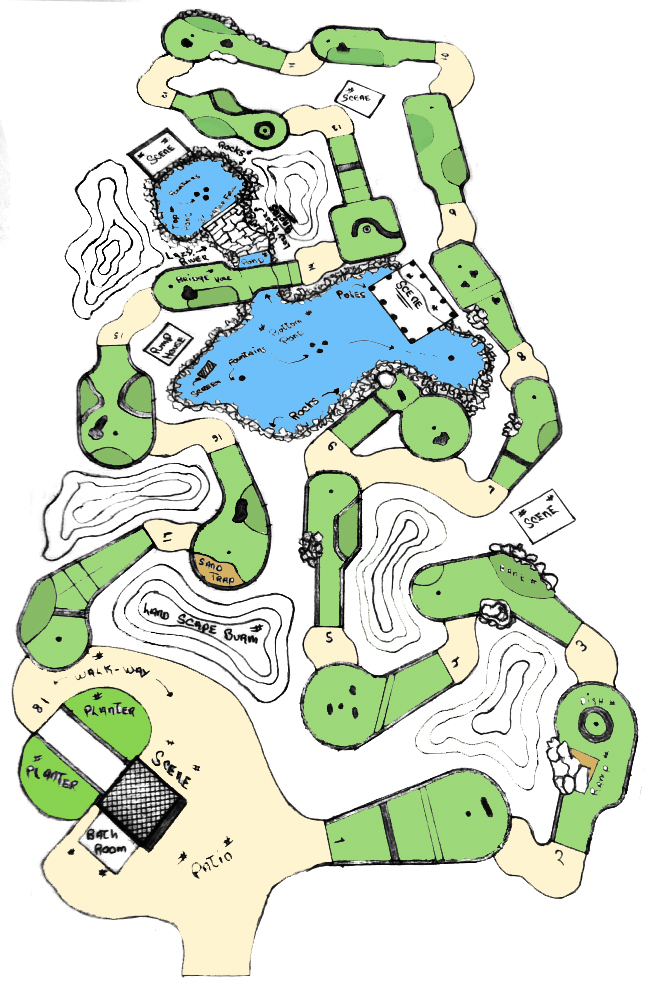 A rendering of the Maple Avenue Mini-Golf provided by Brian Brumley; and the land owned by Brumley at 556 Maple Avenue. Photo by Super Source Media LLC.

“The whole course is going to be based on the history of Saratoga,” stated Brumley, who decided recently to move forward with the idea. With the necessary approvals from town officials, he hopes to open the Maple Avenue Mini-Golf in early July.

On Wednesday, March 21, Brumley appeared before the Wilton Planning Board with George Turner, a senior landscape designer at Saratoga Associates. In his own time, Turner is preparing the related documents on behalf of Brumley in consultation with town officials.

Turner said the general idea is to offer more enjoyable outdoor activities locally during summer months, such as those that now exist in the Lake George area.

“This board is always looking for family-oriented—this whole town is,” responded Planning Board Chairman Michael Dobis. “I think it’d be kind of nice to have this in the area.”

The planning board voted in favor of setting a public hearing specific to Brumley’s application for 6:30 p.m. on Wednesday, April 18, following a separate public hearing for an Exit 16 self-storage facility proposed by Northeast Green Tech LLC.

Brumley explained that a builder in Arkansas who specializes in miniature golf courses plans to travel north and spend several months working on the project.

“This gentleman has built 200 golf courses in his life; been doing it for 35 years,” Brumley told the planning board, referring to the builder Jeff Dillon.

In addition to 18 holes for the golf course, some of which Turner said would include “water features,” the board’s agenda referred to a 180-square-foot building that would contain an office and restrooms.

Currently, a small structure is located toward the front of the 2.4-acre parcel at 556 Maple Avenue, which Brumley said he has owned for six years. An arborist utilizes the property for work purposes but is expected to vacate soon.

The closest comparable miniature golf course is Mr. Bill’s Mill Creek at 3 Trieble Avenue in Milton, off of Geyser Road.

Milton Building Inspector Wayne Howe said that business opened in 1996 and was run for a long period by Boghosian Bros Construction. “They kept the place immaculate,” he said.

The only downside, according to Howe, is the seasonal presence of miniature golf. “We wish it was year-round,” he said.

Planning board members and others in Wilton raised some concerns as well.

Wilton’s Director of Planning and Engineering Ryan Riper indicated that Brumley’s site plans would have to be “revised” to accommodate several changes, including a modification of the parking arrangements.

Brumley said the general rule with miniature golf courses is that one parking spot is needed for each existing hole.

The Maple Avenue Mini-Golf holes need to be reconfigured to “allow more [parking] spaces along the frontage,” Riper said. He requested revised documents by Tuesday, April 3.

In a subsequent email, Riper indicated that Brumley “does not need to proceed” with the town’s normal three-stage approval process because his proposed miniature golf course is considered “minor in scope.”

Riper added that the property “already has an approved commercial site plan,” and that “the adjacent land owners will be notified prior to the public hearing” on April 18.

Dobis questioned the potential for increased traffic on that part of heavily traveled Maple Avenue, close to where site work recently began for a new Cumberland Farms.

Board member Erinn Kolligian noted that, even with the existence of crosswalks, Maple Avenue Middle School discourages youngsters from crossing the road because of its high volume of traffic.

Dobis also recommended that Brumley and Turner consult directly with Wilton Building Inspector Mark Mykins, as a means to ensure that any new structures conform to proper codes. He said that “may just save you some grief down the road, instead of spending money on your design and then finding that it’s an issue.”

Attorney Robert Pulsifer, a former Wilton planning and zoning official who has long had an office across Maple Avenue from Daniels Road, welcomed Brumley’s plans to build his golf course on the other side of a bridge there.

Yet Pulsifer has previously expressed concerns to town officials about traffic problems in the area, pointing to an apparent lack of interest among state Department of Transportation officials in regards to upgrading the Daniels Road intersection.

“Route 9 is a business corridor and it makes sense to have a business there,” Pulsifer said of Brumley’s land. “I am a pro-business, pro-property rights person.”

“It’s the state that’s not doing their job here,” he added. “They won’t listen.”

More in this category: « Cumberland Farms Work Starts Promotion at NBT Bank of Saratoga »
back to top