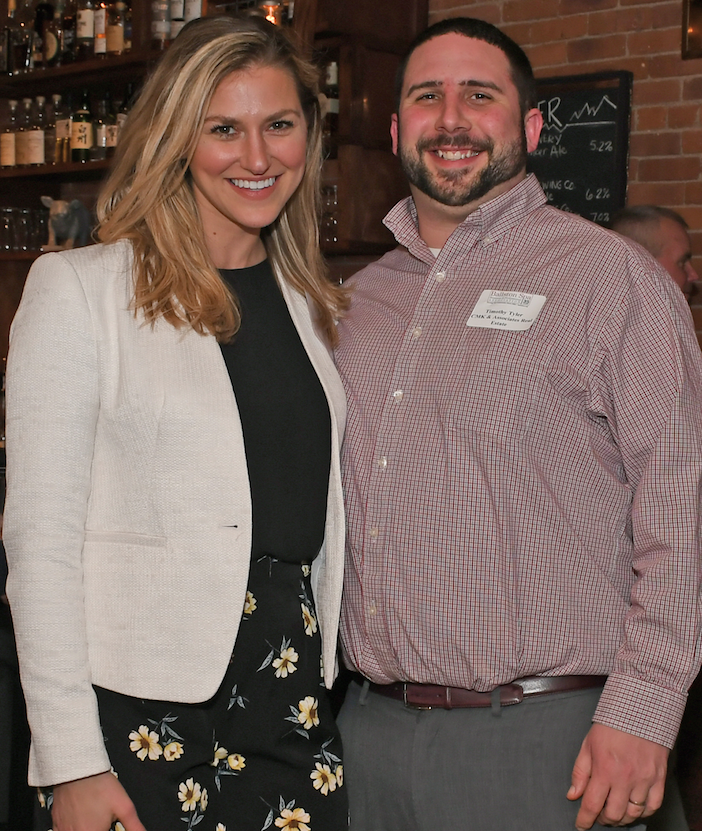 Front photo: Sidney Martin of Simply Sidney expresses gratitude on Wednesday, March 21 for being a welcome member of the city business community. In gallery: Twelve festive scenes from the Next Door Kitchen and Bar in Ballston Spa on Monday, March 19; and two from a Luther Forest Technology Campus networking event on Tuesday, March 20, 2018 hosted by the Malta Business and Professional Association. Photos by Super Source Media LLC.

SARATOGA SPRINGS — Three separate gatherings were held this week in the greater Saratoga area, yet they shared a common theme: small business owners can find lots of success when they network; or when they develop and maintain genuinely cooperative relationships.

One event was held on Wednesday night at the recently opened Simply Sidney Floral Design on Broadway. The attendees, as active members of a group that eagerly promotes the city’s businesses, were happy to get together and celebrate.

On Monday evening in Ballston Spa, dozens of business owners and their supporters converged on the Next Door Kitchen and Bar on Front Street for a similar occasion. They mingled loudly in the popular village restaurant, which was started in 2014 by two savvy business partners.

The third gathering was organized Tuesday in the heart of Malta’s Luther Forest, where a particularly talented woman from an Albany training firm advised more than a half-dozen local professionals in how to expand both sales and opportunities. She focused on some of the attitudes, behaviors and techniques that are most effective when meeting new people.

“I just feel like it’s a big family, and I just couldn’t be prouder to be a part of it,” admitted Sidney Martin, who joined the city’s Downtown Business Association (DBA) late last year upon opening his specialty floral shop in the modern Park Place Condos building.

Martin was in the midst of a pleasant conversation Wednesday with Cudney’s Cleaners owner and DBA Vice President Joyce Ure, before throngs of men and women started filing in to enjoy drinks and food.

Nicci Miller, the general manager of Wheatfield’s a little farther north on Broadway, said she has been a DBA member for about a year. On Monday she was tasked with the management of a sign-in sheet at the Simply Sidney reception desk.

Membership in the DBA, according to Miller, “opens your eyes to other businesses around town that you wouldn’t normally see.”

The attendees were at Simply Sidney as much to hear a special guest, Saratoga Performing Arts Center President and CEO Elizabeth Sobol, as they were to cast formal ballots for a handful of DBA board members.

Sobol was invited to the event by Lifestyles of Saratoga owner Heidi Owen West to talk about the vital links between city businesses and SPAC.

As part owner of Impressions on Broadway, and enthusiastic president of the DBA, Maddy Zanetti has abundant experience in bringing together city business owners for the best possible results.

In her time at the DBA’s helm, Zanetti has been attuned to the busy schedules of the group’s 250-plus members. She said most of them appreciate a switch that she supported in 2017 for the monthly DBA meetings, from evening to morning time slots.

While a big event in Saratoga Springs “reminds people” of the many businesses that call the city home, Zanetti said, it behooves individual owners to go beyond standard networking and devise unique ways of drawing in new customers.

“You get out of it what you put in,” she explained.

Zanetti is well known for sometimes bringing her miniature horse Upset to Impressions for visiting with pedestrians on the sidewalk, which often results in potential customers browsing the assortment of items inside her store.

During the “Chowderfest” event in February, Zanetti added, Impressions offered passersby bottles of water and cookbooks that were created by Discover Saratoga (also known as the Convention and Tourism Bureau.)

On Monday, during a lively community mixer arranged by the Ballston Spa Business and Professional Association (BSBPA), various scenes of village life played on TV screens in the Next Door Kitchen and Bar. SillyCar Design owner Joel Glastetter had prepared the promotional video.

Leaders of the BSBPA scheduled the event to mark 35 years of operation, but also to introduce new board members.

Apparently, several years ago, Glastetter was urged by his wife Melissa to join the group. It has led to multiple different opportunities for his graphic design company, including the production and maintenance of websites for the Ballston Spa Fire District, Community Emergency Corps and Union Fire Company.

Glastetter indicated that he likes having the ability to rent computer servers as a means to specialize in such work.

“That way, I have a little support, too, if something goes wrong,” he said.

David and Kyle Ominski, a father-and-son landscaping team, said they were cheerfully invited into the BSBPA by Vice President Kelly Ostrander, who is also employed by a local Trustco Bank branch.

Their company, KDO Landscaping, now gets more exposure by assisting the BSBPA in the maintenance of numerous flower-planting beds scattered around Ballston Spa.

Ostrander reached out to the Ominskis at the bank, she explained with a smile, “because that’s my thing, my customers.”

Chris Fignar, who co-owns both the Next Door restaurant and Front Street Deli a few doors down, offered praise to the BSBPA for sustaining local businesses as it has since 1983.

“Everybody just really supports each other,” he said of BSBPA members. He added that there is “great word of mouth around here, so if you’re doing a great product people definitely spread that word.”

Fignar said he sources as many of his dining products locally as possible. On a plot of land nearby on Science Street, he even grows fresh vegetables.

His Front Street partner Matt Hall thinks that Ballston Spa can easily accommodate all sorts of other businesses, including more restaurants and bars. He said there are “a lot of new families moving to town.”

The BSBPA officers concluded their formal presentations this week by noting that everyone in the restaurant should have succeeded in meeting at least two new people.

The Malta Business and Professional Association

The exact same sentiment was expressed Tuesday in a small classroom at the Hudson Valley Community College TEC-SMART facility, which is located in Malta’s Luther Forest Technology Campus.

The Malta Business and Professional Association (MBPA) often takes a slightly different approach than the other two groups by arranging guest speakers to inspire local business owners. This week the MBPA featured Lauren Valentine of the Albany firm Sandler Training.

“Networking is about building meaningful relationships” at business-oriented events and not “telling people how great you are,” said Valentine, who was accompanied by MBPA board member Zuzana Kaplan. “It means we need to be focused on the other people there.”

Valentine instructed the attendees to be very discerning about whom they choose to approach, being both mindful of their own interests and sensitive to the needs of others.

“We meet people networking who may not be ready to be our client,” she said, gladly citing examples from her own past experiences.

Karen McGowan is the owner of Capital Interiorscapes, a firm that specializes in indoor plant arrangements. She asked Valentine about the lack of women at many networking events—though McGowan was admittedly unfamiliar with the dominant role of women in the BSBPA and the city’s DBA.

“There’s a lot of us who just feel like the wallflowers,” McGowan said.

Valentine avoided responding to that specific issue, reiterating her previous points and adding that networkers must know when to “politely disengage.”

The MBPA annual dinner is scheduled for 6 p.m. on April 11 at Panza’s Restaurant, on the southern end of Saratoga Lake.