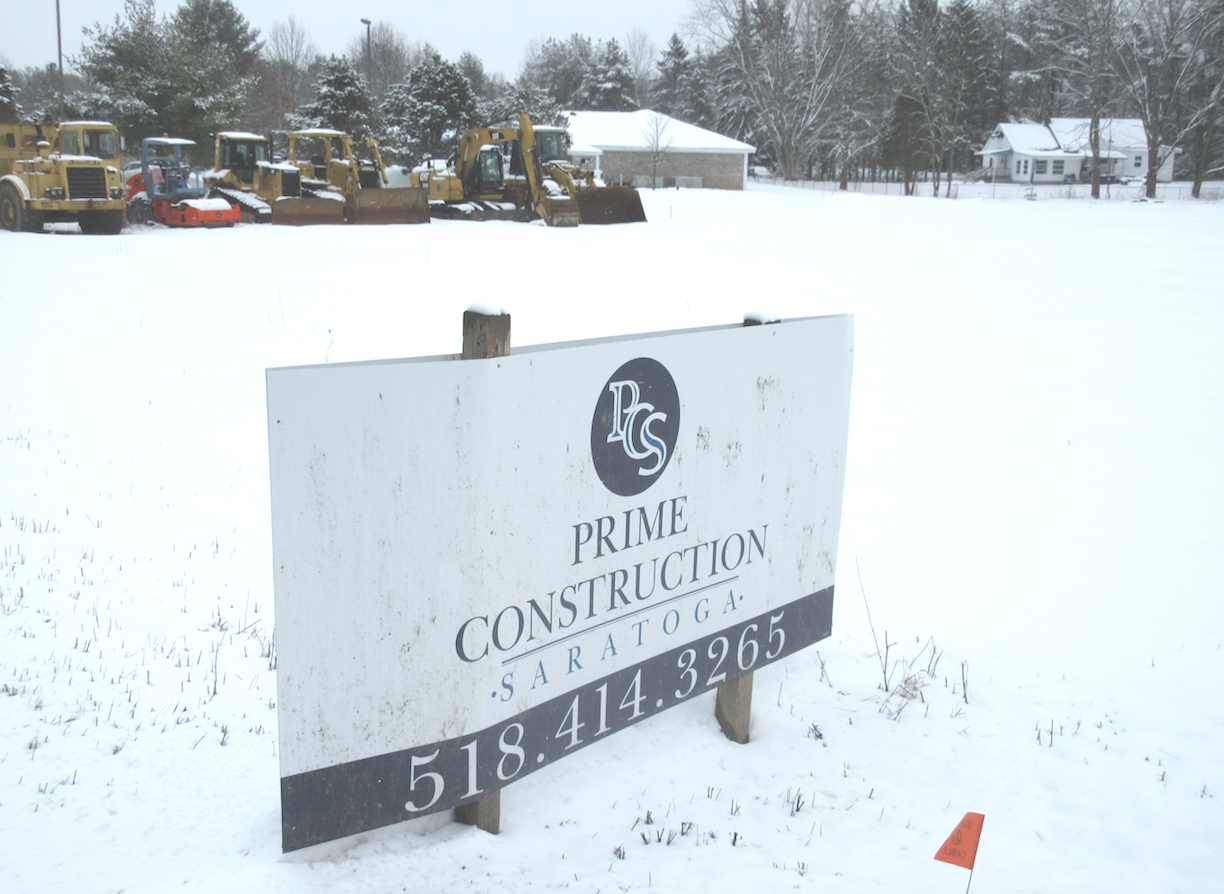 Front and last photos by www.photoandgraphic.com. In gallery (at left): The site on Route 50 in Wilton where Prime Group Holdings plans to build a two-level storage facility. Photo by Larry Goodwin.

BALLSTON SPA – The Saratoga County Industrial Development Agency (IDA) board members reviewed an application for more than $500,000 of tax relief this week in relation to a large storage facility north of the Wilton Mall.

The Saratoga Springs firm Prime Group Holdings has been planning the project for many months and submitted the application.

At more than 90,000 square feet on three acres next to Route 50, and a total project cost of about $4 million, Prime Group’s two-level structure will be among the biggest high-tech storage facilities in the region.

Prime Group officials say they intend to build a “showcase” among many properties.

In late December, the Wilton Planning Board approved a related final site plan. In recent months the Prime Group land itself was cleared and prepared for construction.

The IDA board voted to set a formal public hearing focused on the firm’s Payment in Lieu of Taxes (PILOT) application for 8 a.m. on Monday, April 9 in Wilton Town Hall.

A PILOT valued at more than $527,000 is sought by Prime Group, which in turn estimates its various project expenses to result in a net gain of about $400,000.

“The building is highly secured, using state-of-the-art locking systems and climate controls,” he explained. “This type of business warehousing is very important to small businesses that cannot maintain inventory in their own facilities.”

Vanags reported that the project will generate 90 construction jobs and $56,900 in local property tax revenue after the five-year PILOT expires.

He then introduced Gerard Moser, who appeared as the official representative of Prime Group Holdings in the PILOT application process.

Business owners in Saratoga Springs typically have to pay $40 to $50 per square foot for operating space, according to Moser.

“You don’t want to be wasting $40 to $50 a square foot to store inventory,” he said. “You want to have a less expensive place to offset your costs, and that’s where we come into play. “

Moser said Prime Group’s Route 50 site, as planned, would accommodate at least one tractor-trailer for loading and unloading. There will be two elevators (costing $80,000 each, he noted) and access doors on both sides of the building.

“Everything is going to be designed so that the business owner will have a facility that works for them,” Moser informed the IDA board members. He sees the location as ideal due to the growing number of businesses in the area, not just south on Route 50.

“When we bring clients in, we want to be able to showcase for clients what we do,” he said.

Moser also described the wider scope of Prime Group Holding’s operations. The firm manages nearly $1.5 billion worth of properties in 23 states, he indicated.

“We are the largest independent owner and operator of storage facilities throughout the U.S.,” Moser said.

He added: “We’re not limited to just storage facilities. We do own apartments and other types of projects,” including Malta properties “partially owned by Prime Holdings.”

Moser had a long discussion with the IDA board members regarding an apparent need to expand Prime Group’s corporate headquarters as well.

Moser described the $400,000 worth of PILOT savings for the storage facility in Wilton as a vital component of Prime Group’s local expansion plans.

He said the Prime Group offices on Railroad Place are “bulging at the seams” with 40 employees. The firm considers Saratoga County as an ideal location, Moser added, noting how 20 more employees may be hired to occupy any new space.

But IDA board members criticized the timing of such discussions. They pointed to a strong possibility that the number of long-term jobs created by the Route 50 storage facility in Wilton would be minimal.

“It’s an exciting project, no question about it—don’t get us wrong,” Board Chairman Rodney Sutton said. “But we are dealing with taxpayers’ dollars, and on first blush this is a tough project to sell with one or two or multiple jobs” at the Route 50 site.

Sutton added that he is personally amenable to considering a role for the IDA in Prime Group’s office expansion plans, but only at the right time.

Before disclosing that he has worked in the past with Prime Group Holdings through his own insurance firm, Sutton said the IDA board would determine “how to structure this so that it’s equitable to you, the applicant, and then we can go forward.”

More in this category: « Gideon Putnam Plans May 1 Reopening Milton Manor Pet Spa to Expand »
back to top