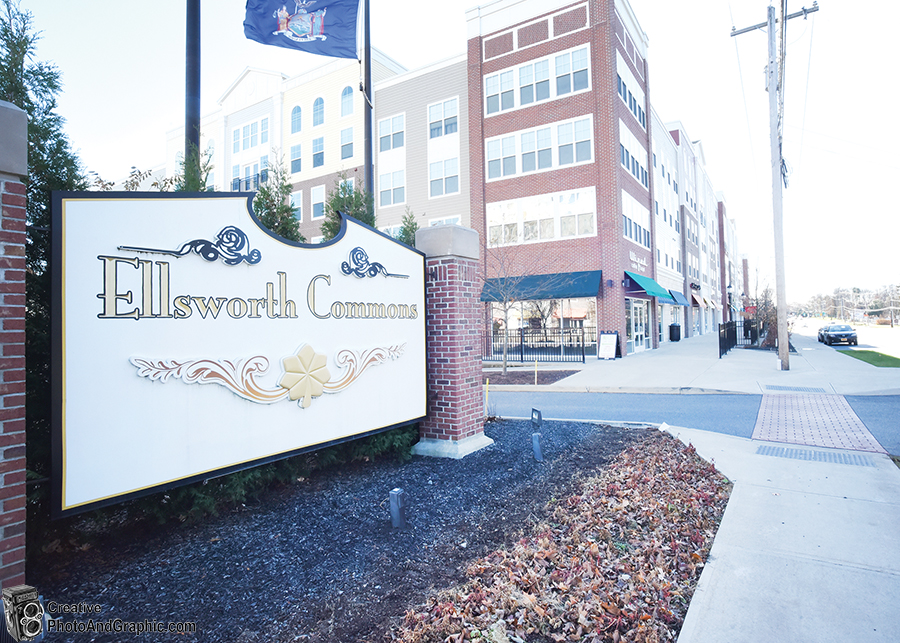 The Ellsworth Commons complex in Malta. Photo by www.photoandgraphic.com; and a slow rush-hour moment at an Exit 12 traffic circle. Photo by Larry Goodwin.

MALTA  — Already, the traffic circle in Malta’s town center must rank as one of the busiest intersections in Saratoga County.

Most drivers there seem so focused on avoiding other vehicles that they ignore an important historical marker by the road. The tall, blue sign with yellow letters honors Col. Elmer Ellsworth, who it says was “born nearby” 181 years ago. He reportedly was “the first” Union Army officer killed in the Civil War.

The volume of traffic east of I-87 Exit 12 has increased rapidly with the recent arrival of a sprawling, four-story, mixed-use commercial and residential complex that also was named after Ellsworth—not to mention the construction of new banks, hotels, offices, restaurants and several more housing developments on either side of Routes 9 and 67.

This week, officials in the Town of Malta indicated that the localized business boom will continue, as they moved plans through the approval process for an ambitious commercial plaza on Route 9 and a Cumberland Farms on Route 67.

A well-organized team of professionals presented maps and details for the Cumberland Farms project on Tuesday before the Malta Planning Board. Stefanie Dilallo Bitter of the Glens Falls law firm Bartlett, Pontiff, Stewart and Rhodes, led them.

“We didn’t submit this application in haste,” began Bitter, noting how her team members are closely analyzing applicable town codes. She said the 24-hour convenience store would be “a very attractive building” that stands as a “perfect” complement to recent development in the area.

After obtaining town approvals, Bitter said she anticipates construction of the 5,200-square-foot store to start in April 2019 and finish by that autumn. It will be located on the vacant lot owned by DCG Development between Blacksmith Drive and a Verizon Wireless outlet.

Saratoga Water Services President Marissa Mackay, whose company supplies considerable amounts of water in the same area, said in an email that the store “will utilize roughly 572 gallons per day based on our typical calculation of similar structures and building use.”

In general, Mackay added, her company is well prepared to supply any increases in water usage amidst Malta’s building boom.

“We are acutely aware of the growth of the town and incidentally the needed growth of our facilities in order to properly service our existing customers, as well as be able to support the growth—be it commercial, industrial or residential,” she wrote.

Bitter’s team and planning board members did discuss numerous “constraints” at the Cumberland Farms site, including the proximity of a traffic circle and the possible difficulties that tractor-trailer drivers may face as they navigate turns to deliver store supplies.

Malta Building and Planning Coordinator Jaime O’Neill explained that the applicants have proposed a driveway on Route 67 with right turns only for vehicles entering and exiting. Those specific site plans are being reviewed by the state Department of Transportation, she said.

However, Malta Planner Floria Huizinga made it clear that the proposal would require a number of modifications, in addition to variances from the Zoning Board of Appeals.

She mentioned, in particular, the proper setbacks from Route 67; the precise dimensions of a patio; a lack of suitable landscaping and sidewalks; and the presence of “faux” windows on the proposed building.

“They have some challenges in front of them when they go to the zoning board,” Huizinga advised, referring to the applicants.

Planning Board Member Roger Laime said he appreciated modern Cumberland Farms stores. But the brightness of any lights and the visibility of “mechanicals” both need to be addressed, he said.

At the Feb. 27 meeting, the planning board agenda also listed a concept site plan for the “Park Place commercial project.” It will fill most of a nearly 10-acre site on either side of Landau Boulevard, which connects to Route 9 across from a gas station.

The Park Place project falls under Malta’s form-based code as well. But last year the Town Board approved a related Planned Development District measure, requiring the applicant to cap its square footage on the lower level of the complex.

Bianchino explained that negotiations with prospective tenants are ongoing, and that they may include a restaurant, day-care facility and drive-thru pharmacy.

“The surrounding infrastructure was designed to accommodate this development,” he told the board members.

If the final town approvals can be secured by the end of March, Bianchino added, construction of the commercial plaza is expected to start later this summer.

O’Neill expressed confidence that the town planning staff would usher both current projects—and a slew of others in the immediate area—toward successful conclusions.

She welcomed the challenge of managing Malta’s continued growth, too. “I would say it’s extremely robust, and it doesn’t show any signs of slowing down,” O’Neill said.

More in this category: « Lemery Greisler Promotes Attorney Cumberland Farms to Celebrate ‘Next Generation’ Store »
back to top