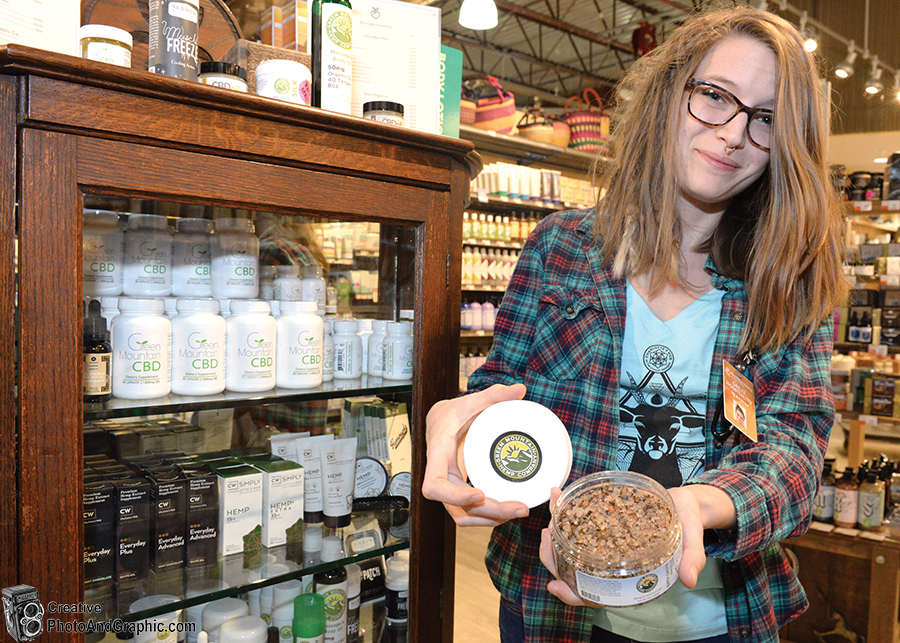 WILTON – The Healthy Living Market and Café in the Wilton Mall, founded by Vermonters, is widely known for offering products that satisfy shoppers who share a certain level of environmental awareness.

Amanda Washburn, the store’s retail buyer for wellness items, indicated this week that she has seen a rapid increase in sales of a relatively new line of eco-friendly products.

Most of the products contain “CBD,” a non-psychoactive compound that develops naturally in the seedless flowers of cannabis plants. The acronym is short for the scientific term “cannabidiol.”

“It really does work miracles for people, and I’m glad people are opening their eyes to it,” Washburn said.

During a brief interview in the Wilton store, Washburn reported that many Healthy Living shoppers claim they are using CBD products to treat a wide array of physical ailments, ranging from anxiety to skin conditions to seizures.

She said local nurses and doctors are even quietly recommending CBD products to their patients.

But Washburn also acknowledged that any claims related to the effectiveness of CBD are not “clinically proven.”

“There’s so many different things that it’s said to help with,” she offered, as she described the CBD products kept in a locked glass case in the supplement section of the market. “It’s crazy how big it’s become and how quickly.”

The CBD products available at Healthy Living (some rather pungent) range in price from $29.99 to $149.99. There are topicals that can be rubbed directly on skin; bath salts; oils that can be ingested by a dropper or simply added to food; and a CBD tea.

Washburn explained that the store is seeking to expand its selection of CBD-infused food for pets as well.

She said there have been steady sales of the $150 bottles of “Charlotte’s Web,” a highly concentrated CBD oil named after a Colorado girl who experienced dramatic seizures. In 2013, the girl was featured in a televised documentary produced by Dr. Sanjay Gupta.

At present, Washburn added, most of the CBD products are manufactured and tested in states that allow more cannabis growing, such as Colorado and Vermont.

In New York, state agriculture officials are in the process of expanding an “industrial hemp” program that may result in more localized CBD production.

In addition, several registered companies in New York sell CBD products through the state’s “medical marijuana” program, according to Jill Montag, a spokeswoman for the state Department of Health.

When asked to comment specifically on the increase in sales of CBD products at Healthy Living and elsewhere, Montag explained that all of them “are outside the purview of the state’s medical marijuana program and may be of unknown content and quality.”

“The people are digging it. They’re buying it,” Myers admitted.

Myers explained that she first encountered CBD products in a chiropractor’s office. She is still in the process of securing constant supplies for customers who frequent her small grocery market on Route 29 west of Schuylerville.

A typical CBD balm “relaxes” parts of the body where it is applied, Myers explained, providing more long-term relief than the “hemp” rubs that she already sells for pain.

“Honestly, it’s going to women over 50,” Myers said of the new CBD balm. “They’re all complaining of inflammation.”

Richard Frank, owner of Four Seasons Natural Foods in Saratoga Springs, confirmed this week that he, too, has witnessed the rise in popularity of consumer items that contain cannabidiol. More consumers, he said, should be educated as to the proper "therapeutic dose" of CBD for their particular condition.

A Four Seasons manager deals directly with CBD companies in California, Vermont and other states to maintain constant supplies of products that are similar to those available at Healthy Living, Frank said.

The store even obliged a California native, Frank explained, who relocated to Saratoga Springs and requested that Four Seasons start carrying a particular CBD product.

"The whole industry's a little 'Wild West,'" he said, noting how federal authorities have attempted to clamp down in recent years on the CBD manufacturing process.*

*Author's note: The article was updated to include the comments of Richard Frank at Four Seasons Natural Foods after all print copies of Saratoga TODAY were published.

More in this category: « New Hire at Bucknam and Rodecker Fingerpaint to Buy Broadway Property »
back to top