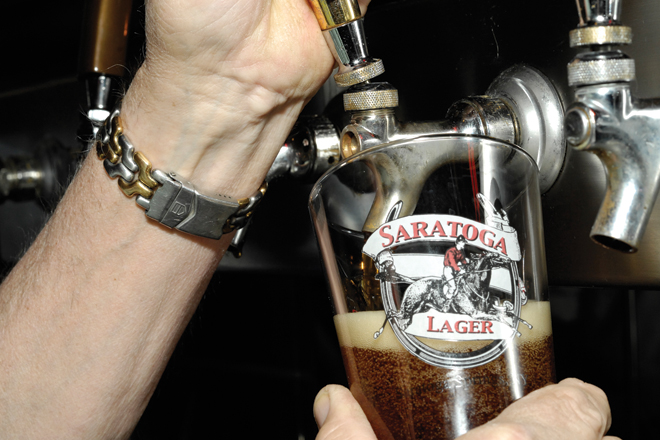 SARATOGA SPRINGS – Earlier this week, a Brooklyn company reported through social media that its business relationship with Saratoga Brewing Company was recently terminated, forcing an evacuation of truckloads of beer-production supplies from the popular Excelsior Avenue warehouse.

Max Oswald, the owner of Saratoga Brewing, did not return repeated calls for comment.

Multiple attempts to contact Braven Brewing in Bushwick, Brooklyn and Mendocino Brewing Company in Ukiah, California also were unsuccessful. Both companies have existing partnerships with Saratoga Brewing, according to a report in the Daily Gazette.

A beer industry expert familiar with the situation, who requested anonymity due to an ongoing investigation, told Saratoga TODAY that the sudden closure of Saratoga Brewing is related to legal problems facing an executive at the international brand Kingfisher Premium Lager Beer.

A statement on the Kingfisher website describing the company’s history makes reference only to a licensing agreement with Mendocino Brewing Company.

A posting on Instagram Monday by Braven Brewing representatives explained an incident that reportedly took place at the end of last week: “When you’re told your partner brewery has gone out of business and you have 72 hours to remove $60,000 of packaging material and get 800 kegs worth of beer out of the tanks, what do you do? You get in your car and drive 4 hours north to conduct a rescue operation,” the social media post said.

“We were able to move 60 pallets of kegs, keg collars, keg caps, bottle caps, 6-pack carriers, and 24-pack cases into storage on Friday morning,” the Braven posting added. “Then we salvaged about $3,000 of hops, threw them into the car, and UPS’ed them to another brewery for future batches.”

Large tanker trucks sent to the Saratoga Brewing facility by Braven Brewing also removed fermented beer, the posting indicated, with the assistance of a special fitting to perform that task.

“All of this constitutes the closing of one chapter in Saratoga and the beginning of another” at the Ipswich Ale Brewery in Massachusetts, the Instagram post concluded.

Rob Martin, president of Ipswich Ale Brewery, confirmed that his company was contacted by Braven Brewing and agreed to make use of the hops and packaging supplies that were transported from Saratoga Springs.

“We’re going to start brewing for them next month,” Martin said of Braven, using that company’s beer recipes.

Stewart’s Shops President Gary Dake, who owns the property at 131 Excelsior Avenue, confirmed that financial problems at Saratoga Brewing are apparent. The company has been located there since about 1997, he explained.

“We’ve been having problems getting paid our rent,” Dake said, adding that he is already seeking new candidates for another beer producer at the site.

“We’d love to keep it a brewery, keep those jobs in Saratoga Springs and keep the economy thriving,” Dake said.