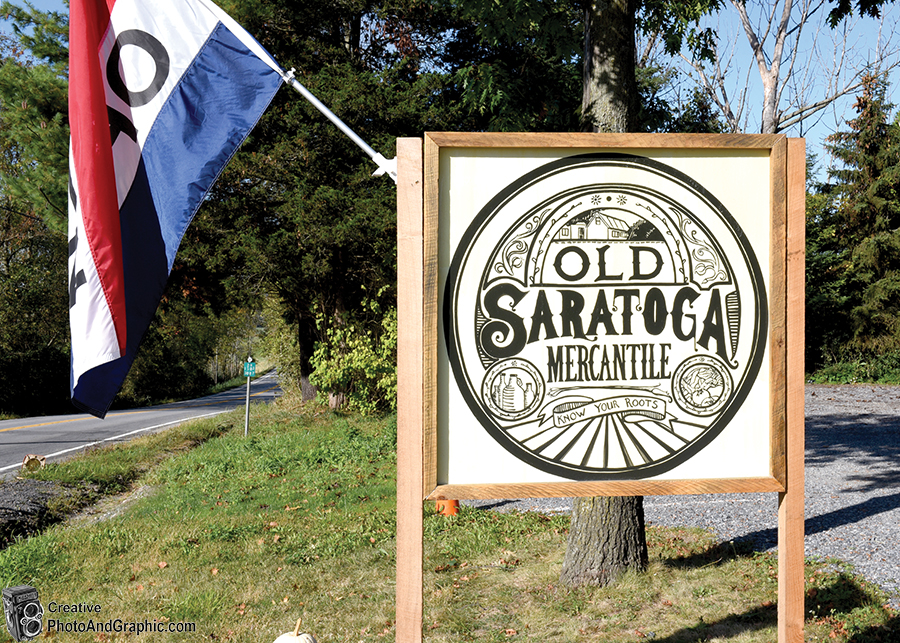 Photos of Christina Myers and her Old Saratoga Mercantile by www.photoandgraphic.com.

SARATOGA – Christina Myers has worked hard all year, only to be comfortable in her apron as she starts her new job: running a humble little store in the countryside that offers fresh meat, fruit, cheese and vegetables to shoppers alongside an assortment of wholesome products. She calls it Old Saratoga Mercantile.

“I want to be my neighbor’s place to be able to come and get good stuff,” Myers said earlier this week, before her first customers of the day (two young ladies) started browsing the widely varied items displayed on her tables and shelves.

Myers has operated her market just west of Schuylerville for nearly five weeks, and she is planning a formal ribbon cutting and grand opening event on Sunday, Oct. 8, starting at 11:30 a.m. Individual items will be raffled off every hour and, toward the end, one person will be awarded a large care basket prepared by Myers herself.

Myers is a seasoned journalist and an exceptionally talented writer. Yet, in November of last year, she and her husband Tim finalized a real estate transaction for the 5 acres of property at 1120 Route 29 on which she decided to begin this new endeavor. The couple will eventually build a house 350 feet back from the highway.*

In consultation with members of the Pitney Meadows Community Farm in Saratoga Springs, Myers reported that she plans to have a “high tunnel” installed to produce her own fruits and vegetables on site as well.

“We hope to be growing year-round ourselves,” she said.

Last spring, the Town of Saratoga Planning Board issued a formal approval of the business in a 5-0 vote, according to minutes of its May 24 meeting. The approval was conditioned on the installation of fencing near the parking lot and a “driveway apron” for safer access from Route 29.

Myers said about 30 feet of the gravel driveway is being paved this week, since some rocks are finding their way into the busy roadway. “I obviously want my customers to be safe,” she said, adding that the planning board “gave us a year” to make any necessary improvements.

On her business cards, Myers promotes her simple slogan for Old Saratoga Mercantile: “Know Your Roots.”

In an era of hyper-commercialization, during which most foods take weeks to process and transport before they hit grocery store shelves, Myers is basically offering area residents healthier, fresher alternatives as a means to support the local economy.

Aside from getting her hands on drywall and plumbing, and generally taking on the laborious task of fixing up the main building on her property, Myers spent the early months of the year reaching out to local farmers and other small business owners to gauge their interest in supporting her “Know Your Roots” concept.

She quickly discovered “this could really happen,” she said. “There are so many people who are passionate about what they do.”

“I want people to think of me as their local grocery store,” Myers says. She does carry a number of products from reputable national companies, such as Equal Exchange teas and Dr. Bronner’s hemp soaps, house cleaner and toothpaste.

She also offers healthy snack and beverage items and “touristy” merchandise that may appeal to bicycle riders and passersby on that stretch of Route 29 west of Schuylerville.

Myers said customers, indicating the potential popularity of her type of stock, already have purchased every different item in the store.

“I know what kind of store I want to go into,” she concluded about the whole concept. “I want you to know the face. You’re buying it from your neighbor.”

* Due to an editing error, a reference to Myers's journalism experience was omitted in a previous version of this article and all print copies of Saratoga TODAY.