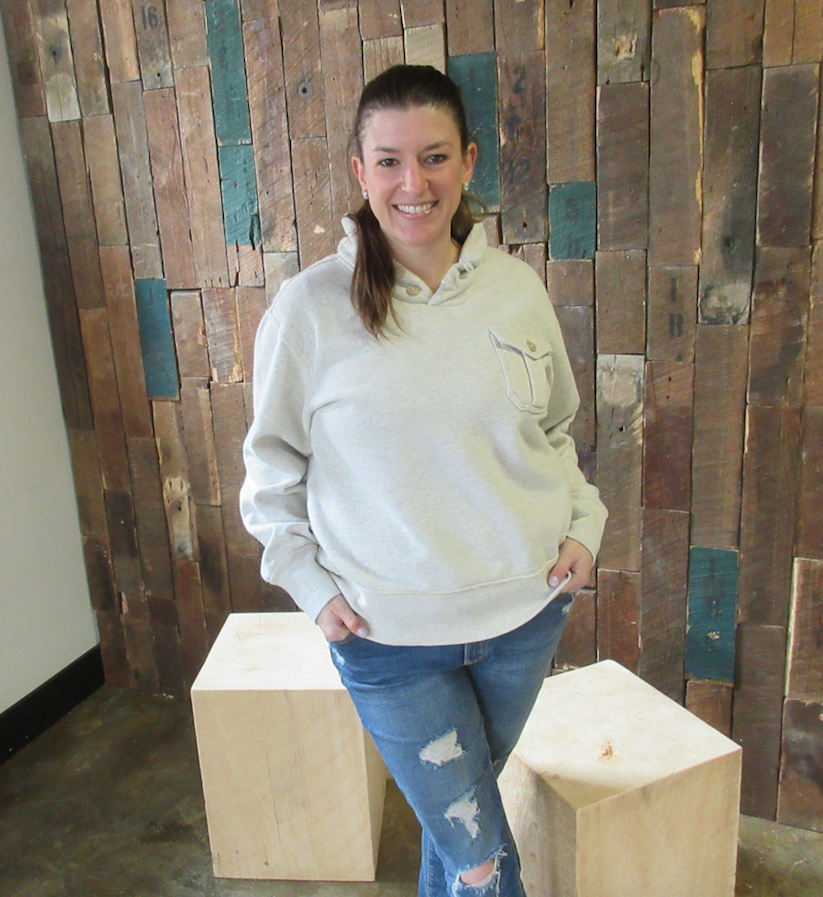 SARATOGA SPRINGS – Julia Sanzen says she enjoys cooking for people as much she loves to find a hip place for brunch.

This June, she will combine both of those experiences with a deep appreciation for Saratoga’s past by opening her new Farmers Hardware brunch hall at 35 Maple Avenue in the city’s historic district.

As the main chef, Sanzen will serve customers between 8 a.m. and 3 p.m. in the same building once utilized as a warehouse by the city’s Farmer family, who opened a popular hardware store on Broadway nearly a century ago.

“We respect the history of this town,” Sanzen said during a recent tour of the 2,400-square-foot space. She is a local native who attended college in the nation’s capital and lived for about a decade in the Big Apple.

Sanzen says she is eager to finish interior renovations and open her “fast-casual” dining spot, at which brunch customers will proceed to the second floor to place their orders. Most will then sit on heavy, rectangular blocks of oak at large “communal tables” on the first floor, she explained.

The wooden blocks were obtained from a U.S. Navy shipyard in Portsmouth, New Hampshire.

Sanzen said the brick patio outside the building also will have dining tables. The third floor will be available mainly for small private events such as bridal or baby showers.

Previously, Sanzen had settled on starting her own catering business called Paddock to Porch, but all that changed when she found the right partner in Tyler Russell.

Russell is one of three proprietors—along with his father and brother—at a Lake George wood-reclaiming company called Storied Boards, which is supplying most of the renovation materials inside 35 Maple Avenue.

When reached for comment, Russell said the business plan at Farmers Hardware is all about “providing great food for a reasonable price.”

“Whether a big bite while looking over the Daily Racing Form before a day at the track, or a quick workday lunch meeting with your fellow coworkers, Farmers Hardware aims to provide awesome food and extraordinary drinks in a super cool environment,” Sanzen elaborates in a statement on her website (www.farmershardwaresaratoga.com).

“Our brunch hall concept is modeled after the great open and airy American food halls like Boston’s Quincy Market or Union Market in Washington, D.C.,” she says. Sanzen adds that she will serve “classics with a twist, like her signature Eggs Shorty (Bordeaux braised short ribs Benedict, with poached egg and browned butter hollandaise).”

Together, Sanzen and Russell honed the new Farmers Hardware plan over the last year.

Russell said they first had met as students at Albany Academy in the early 2000s and re-connected late in 2015, since Sanzen spent the intervening years in Washington, D.C. and New York City.

According to Russell, it seemed doubtful that they would be able to compete against the area’s dominant catering companies like Mazzone Hospitality, which he said “is out of this world and just about everything they touch turns to gold.”

“We did a thorough analysis of the restaurant scene” in Saratoga Springs, Sanzen says, noting how she and Russell identified a “huge gap” in local eateries offering brunch.

Brunch “is the thing to do in New York City” and is “so greatly needed in this town,” she added.

In March, Sanzen and Thomas Gardner of Saratoga Historic Properties—owner of the Maple Avenue property who will lease it to Sanzen and Russell—signed the necessary documents prepared by the city’s Design Review Commission.

The commission reports that the building was originally put up in 1925, and that it will remain “virtually untouched” during the Farmers Hardware renovation.

Due to the excessive costs of installing a normal kitchen inside, Sanzen said, she decided instead to purchase a Canadian-made shipping container for $70,000 that will be situated outside the building.

Existing landscape plants and an 8-foot painted screen will obscure any view of the outdoor unit, according to the commission.

Gardner called the Farmers Hardware business plan “innovative for Saratoga,” and he appreciates the “very rustic” appeal of the interior materials supplied by Storied Boards.

Sanzen’s fast-casual brunch spot is “a new concept,” Gardner said, that “brings Saratoga into the avant-garde of dining.”

* [Author's note: According to company spokeswoman Niki Hodgskiss, the correct name is Venture Food Trucks. Its website is www.venturefoodtrucks.com.]

Login to post comments
More in this category: « New Bed and Breakfast Opens New Board Member at Franklin »
back to top