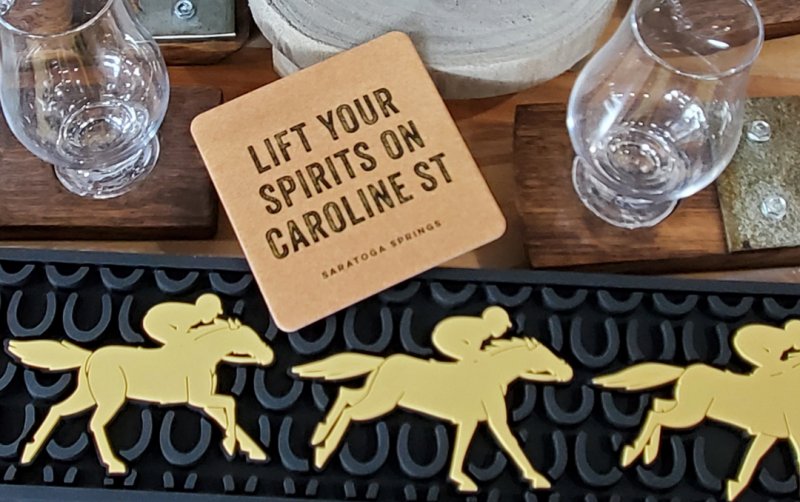 Some of the merchandise for sale at Tailgate and Party on 33 Phila Street. Photos provided by Kirsten Lambert.

SARATOGA SPRINGS — Tailgate and Party has had a successful summer at their new location on Phila Street.

Tailgate and Party on 33 Phila Street, diagonal to Ben & Jerry’s is your go-to, one-stop-shop for all things celebration. The store has an assortment of merchandise that you might not find elsewhere, from track necessities to hostess gifts and milestone birthday supplies, including helium balloons. As the seasons change, owner Kirsten Lambert said some of the merchandise in the fall will transition to represent that, with more coolers, NFL gear, and tailgate-related items – true to the store’s name. However, a bestseller throughout the seasons has been their adult drinking games. Lambert said that customers who come into the store and see the display always have a story to tell or a memory to share.

“It is a very happy store,” said Lambert. “Everyone is always laughing as they go through and look around at what we have.”

Tailgate and Party fills a need for Saratoga, which Lambert realized when she had a hard time finding supplies for her mom’s 80th birthday.

Lambert had always said she wanted to be three things in life – a hairdresser, a teacher (which she was for 25 years), and to work in a store. So, she opened Tailgate and Party, and found out that much like teaching, there is a planning aspect to owning a party store.

This summer has been quite successful since the move from the corner of Henry and Caroline Street to Phila Street. Traffic is heavy in the morning, as customers wait for brunch downtown or the track to open. But as she has learned from other local Saratoga business owners, there is never a “method to the madness”.

“When I was on Henry and Caroline Street during the pandemic, I got to meet and talk to the locals. I learned so much about Saratoga,” said Lambert. “It was great preparation going into this new location. We want to keep evolving, changing, and moving forward.”

To view Tailgate and Party’s featured products, balloon inventory, and more, visit their website at www.tailgateandparty.com, or reach the store by phone at 518-886-9015.

Read 453 times
More in this category: « Forcivity Breaks Top 400 and Unveils New Logo Amid Merger Fearless at the Dentist: Seniors Don’t Have to Overpay for Dental Services »
back to top