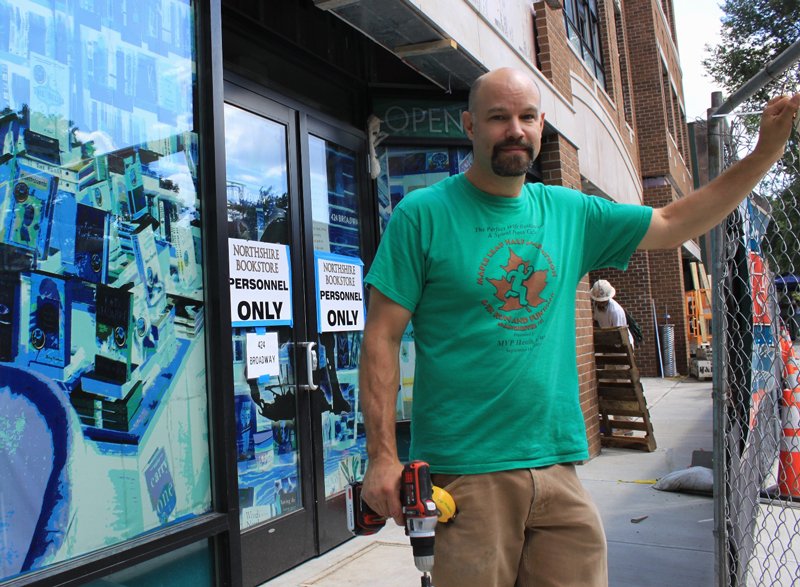 Before the books, a drill driver. Chris Morrow at work outside Northshire Bookstore Saratoga, in advance of the bookstore’s opening in 2013. Photo by Thomas Dimopoulos.

SARATOGA SPRINGS — Northshire Bookstore opened the doors to its Saratoga Springs store on an August day in 2013, affecting in innumerable positive ways the downtown landscape of the Spa City. This week, it begins a new chapter.

Chris Morrow’s parents, Ed and Barbara Morrow, started the original store in Vermont in September of 1976.

“When thinking about selling, my main worry was always finding someone, or two, who had the right sensibilities as well as the chops; someone who appreciated The Book, the art of bookselling and our amazing staff and who also had the background, energy, vision and resources to carry the bookstores into future decades,” said Chris Morrow.  In a generation of memories, Morrow explained it is the people he has come across he is most grateful for - from colleagues who have worked at the bookstores, authors who have dropped by, fellow bookstores, publishing houses, and the clientele “who have made all this possible for us. What a beautiful adventure.”

Ed and Barbara Morrow added that this is a personally bittersweet moment for them and expressed confidence they are passing the store’s stewardship into good and competent hands.

Clark and Lu French, longtime patrons and supporters of Northshire, released this statement: “As this beloved family-owned business approaches its 45th Anniversary, we are thrilled and honored to become its next stewards. Along with our ownership team members Jon and Tom West, we are committed to continuing the legacy and high standards the Morrows have cultivated over their long tenure.

“The Northshire is more than a bookstore to us. It’s a vibrant gathering and shopping venue where memories are made and discovery is encouraged. Supporting and nurturing this enriching experience is our highest priority. We are sincerely grateful to the Morrow family for trusting us with their life’s work and welcome the opportunity to continue their legacy for many years to come.”

The French family has been involved in numerous Vermont area ventures, including the Taconic Hotel and the recent restoration of the former Mark Skinner Library building, as well as serving as board members of the Manchester Community Library, Taconic Music and Burr and Burton Academy.