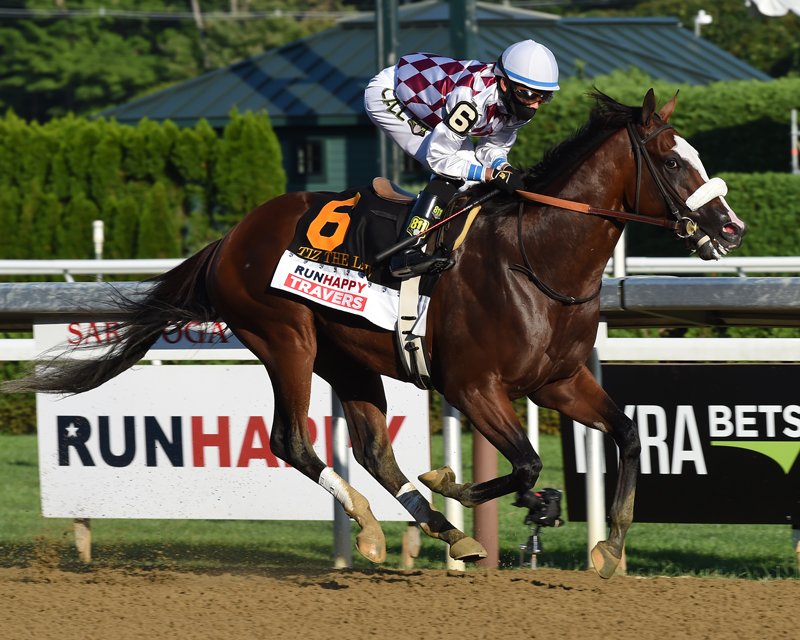 Locally-owned Tiz The Law, this year’s Belmont Stakes and Travers Stakes winner, will be competing in the Breeder’s Cup Classic for a purse of $6 million

Since 1984 the thoroughbred racing world has had its own end-of-the-year championship races.

First dubbed the Breeders’ Cup and then later changed to Breeders’ Cup World Championship, the two-day event to be run on Friday, November 6 and Saturday, November 7 consists of 14 races in numerous categories for total purses of $31 million. The large purses offered lure the best horses from both the United States and abroad to determine champion status at year end.

The races are conducted in moving locations with this years’ renewal being held at Keeneland Race Course, without fans due to Covid-19 concerns, in the blue grass of Lexington Kentucky ­— the heart of thoroughbred breeding country. The races were designed to give thoroughbred racing a crowning year-end event similar to the Super Bowl, World Series or NBA or NHL playoffs. Due to the time of year and weather concerns Saratoga Race Course has yet to host the event but each year horses that raced here in Saratoga compete in these races.

This year’ renewal has a particular Saratoga influence as locally-owned Tiz The Law, this year’s Belmont Stakes and Travers Stakes winner, will be competing in the Breeder’s Cup Classic for a purse of $6 million with the victor likely to garner Horse of The Year honors.  Run at the same mile and one-quarter classic distance as the Travers Stakes, this will mark the first time Tiz The Law has competed against older horses rather than the three-year-old crop he has exclusively faced this year. Typically, three-year-old thoroughbreds mature enough by the fall of their three-year-old year to compete against the older stronger horses and have fared well in this race, including winning last year’s running by Vino Rosso.

Owned by a group of Saratoga locals led by Jack Knowlton under the same Sackatoga Stables name that owned 2003 Kentucky Derby winner Funnycide, Tiz The Law was born in New York at Sequel Farm in Hudson, New York rather than in the lush blue grass of Kentucky on March 19, (St. Joseph’s Day) 2017.  After spending the obligatory 90 days in New York to qualify as a New York bred for racing purposes he went to Kentucky to grow and develop. Tiz The Law returned to New York in August 2018 where he was sold at auction to the Sackatoga group at the Fasig-Tipton sales here in Saratoga for $110,000.

Tiz The Law won the two big races run in New York for three-year-olds the Belmont and Travers putting him in contention for both three-year-old of the year and Horse of the Year honors. His performance in Saturday’s Breeders’ Cup Classic will determine those titles. As a well-bred classic winner, he most certainly will be a stallion prospect when his racing days are concluded.

Tiz the Law is trained by Barclay Tagg and ridden by Manny Franco. He is projected to be among the middle betting choices in the race behind betting favorite behind the Bob Baffert trained entries – Improbable, Maximum Security and Authentic.

Read 148 times
More in this category: « Saratoga – It’s About Human Connections
back to top