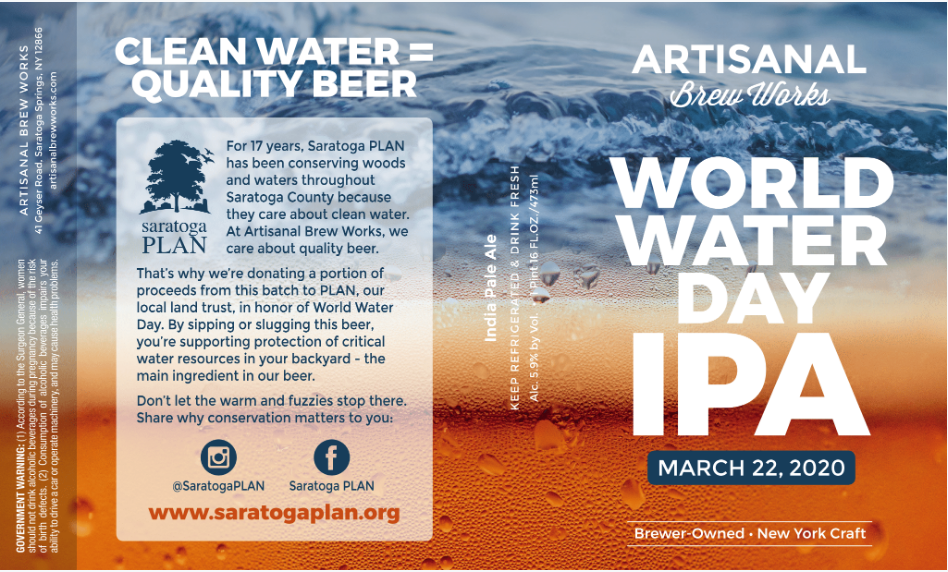 World Water Day highlights the importance of freshwater, showing the connection between water and climate change. The goal is to bring awareness of how to use water more efficiently and adapting to those habits.

Artisanal Brew Works partnered with Saratoga PLAN, Preserving Land and Nature, to create a one of a kind beer that’s only available for a limited time. Owner of Artisanal Kurt Borchardt said he’s excited about the fundraiser.

“We like to do that kind of stuff,” Borchardt said.

The beer, named the World Water Day IPA will be offered until the single batch runs out. He said a portion of proceeds would go to support Saratoga PLAN.

“Our intention with this collaboration is to bring awareness to the community by connecting the dots between water conservation and all of the systems that rely on it, not just nature,” said Alex Fylypovych, PLAN’s Community Engagement Manager in a press release.

As a brewery that focuses on achieving unique flavors in beer, Borchardt stepped up to create the IPA. He added that in early summer, another beer would be released to donate to the Saratoga Auto Museum.

The brewery opened in July 2016 as a New York State Farm Brewery, meaning 90 percent of raw materials came from NYS farmers. However Borchardt said grain was becoming expensive, they were limited on hop choices and they didn’t want to pass cost to the customers.

“They love the idea of local but then they look at the price and ask why it’s so expensive,” Borchardt said. “It was really hard to compete like that and we wanted to make certain styles of beer, so directionally we changed our focus from being exclusively a farm brewery to a dual license.”

The brewery is still certified as a NYS Farm Brewery, so each year the brewery has to use a certain amount of farm materials. In addition, the brewery also has a microbrew license, which is what more breweries have.

“Once we did that we started ramping up our creativity because we weren’t constrained by ingredients anymore,” Borchardt said. “That [license] allows me to use ingredients form all over the world.”

The brewery now aims to target unique flavors in the beers they create, like a chocolate caramel truffle stout, and figure out what ingredients they can use to achieve that. He said they perpetually try different hops, water chemistry and different grains to achieve a specific flavor.

“I like the fact that were not static and were flexible in a lot of different ways. Clearly the different beer styles we make are reflective of that,” Borchardt said.

More in this category: « Bubbling Up Saratoga Finishing Touches Announces New Location »
back to top