Providing a Special Tour for a Good Cause 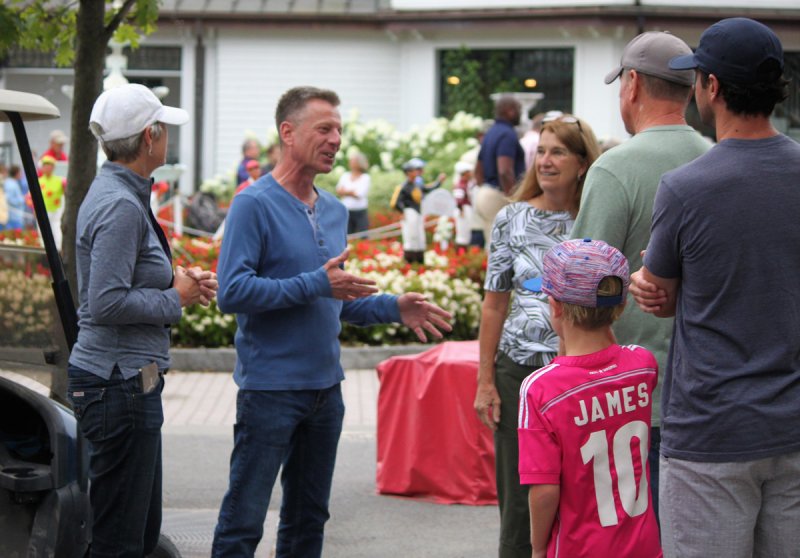 Richard Migliore is a believer in giving back, especially to those who have supported his successful career as a jockey.
In this case, it is retired horses.

Migliore, who won 4,450 races on horses that include Win, Artie Schiller and Hidden Lake, has been providing unique golf cart tours of Saratoga Race Course this season to benefit the Thoroughbred Retirement Foundation.

With the support of trainer John Kimmel, American Pastime Stables and the New York Race Track Chaplaincy who lend their golf carts, Migliore gives a two-hour tour to small groups that starts at the jockey fountain in front the clubhouse entrance through the backstretch before finishing at the jockey’s room.

Throughout the tour, Migliore points out some of the captivating landmarks: the first Fasig-Tipton pavilion that is now the mutuel bay area near the paddock; Greentree Stables where Fred Astaire stayed as a summer guest for C.V. Whitney; Horse Haven, the first track of Saratoga that was later used for training until the early 1980s and where Migliore galloped horses for trainer Stephen DiMauro; Kimmel’s stable that was the private barn for Allaire DuPont, owner of Bohemia Stable and Hall of Fame champion Kelso.

During the tour, Migliore also shares his experiences as a jockey and a horseman, whether it is his first time going to Finger Lakes, still mucking stalls and riding the pony at 5 a.m. after winning the 1981 Eclipse Award for leading apprentice jockey at the age of 17, or being sent to Santa Anita to help Godolphin work their horses going into 2009 Breeders’ Cup.

Migliore said he enjoys sharing the Saratoga history as he tries to keep it entertaining, especially with his personal experiences.

One of the stories that Migliore likes to share with the groups is his experience aboard Mourjane, whose gravesite is located on the far right of Quick Call, A Phenomenon and Fourstardave near the turn and overpass on Clare Court.

Migliore was aboard Mourjane, a difficult horse to ride, in the 1986 Fair Grounds. Shortly after the starting gate opened, the horse took himself well-behind the field – about twenty-five lengths from the next-to-last horse – as Migliore had to be patient with him. At the half-mile pole, Mourjane finally made a move while Migliore guided him along the rail to narrowly win the race.

Throughout the tours, TRF Director of Major Gifts and Planned Giving Kim Weir and the groups have been engaged by Migliore’s stories.

“He makes it very real. It is his stuff that makes it great,” she said. “I learn something every time. I love how he remembers so much. He makes you feel like you were there. He’s very good tour guide.”

People from Massachusetts, Arkansas, Chicago and other places have accessed these tours through either a donation, the TRF’s online auction or other charity auctions. Debbie Green, co-chair of Florida Thoroughbred Charities Social & Charity Committee Chair Golf, won a tour through an auction at her own event last year, which benefitted the Florida Thoroughbred Breeders’ and Owners’ Association. Matt Miller, winner of the 2021 Breeders’ Cup Betting Challenge, was the top bidder for the online auction, then invited the 2019 BCBC winner Brad Anderson for the tour.

“People are traveling from all over the country to do this tour,” Weir said. “It started as an auction item, then people donated. It has been amazing. Between all of the auction items and the direct donations, it has at least raised enough to cover two horses in the herd for a year.”

Retired horses have become a part of Migliore’s life since his riding career had been dependent on them. He believes that anyone involved in active horses should also play a part into their retirement.

“I think it’s incumbent upon anybody in the industry, anybody who makes a living off of these horses, anybody who enjoys an afternoon because of these horses, has a responsibility to make sure they are taken care of when their racing days are over,” he said. “So, it is giving back in some small way.”

One of those horses is Phone in the Money, who now resides at Migliore’s farm in Millbrook, about 120 miles from Saratoga Springs, with 32-year-old retired show horse Rosie.

Prior to Phone in the Money’s retirement, Migliore already had a connection with the horse after riding him to his second career win in March 2005. Shortly after, the horse was retired and became a lead pony for Kimmel.

Eventually, age, lack of interest and soreness caught up to Phone in the Money, but there was not much interest from anyone in adopting him. That’s when Migliore brought the horse to his farm. Today, the 20-year-old horse has a Winner’s Circle photo of him with Migliore and former trainer Michael Hushion that is framed in his stall.

“He got to an age when he became a bit sore. He wasn’t happy doing it anymore,” Migliore said. “Nobody really wanted him. I had won one race on him. I felt very strongly that I had to give back. He’s basically a pasture ornament. I love him.”

Migliore said his pair of retired horses also provides tranquility and enjoyment, especially during a summer morning when he sees them through his kitchen window.

“I get up early and have a cup of coffee. I look at the horses. It’s a pretty good scene,” he said. “I genuinely appreciate that I get to live this life by looking at horses while having coffee. That quote from Winston Churchill: ‘There is something about the outside of a horse that is good for the inside of a man.’ I believe that.”

The TRF is holding its Barbeque at the Barn event at the Saratoga Winery on Aug. 23 from 5-9 p.m. Along with a barbecue buffet, there is family-friendly activities, music, raffles, and many silence auctions available. For more information, visit the TRF’s Barbeque at the Barn website at
www.trfinc.org/event/bbq-2022.