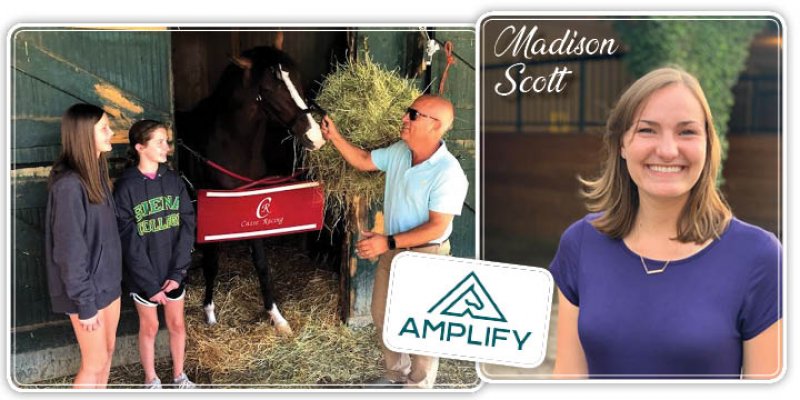 Most people who are horse racing fans or work in the Thoroughbred industry were likely introduced to the sport by a family member or someone they knew in the game.

Along with that, social media and technology has helped fans and members in the industry remain informed about news in the sport.

Despite those easily accessible platforms for information, many younger people still have limited access to resources about opportunities involving horse racing or the Thoroughbred industry.

Madison Scott is one of those people who can relate to that experience, but she is trying to do something about it by being an advocate by providing resources, mentors and opportunities for the next generation of horse racing fans, owners, or those who want to work in the industry as the co-founder of Amplify.

Growing up as a 10-year-old living in Austin, TX, Scott didn’t have much exposure to horse racing until she watched Smarty Jones go for the Triple Crown bid in 2004. From there, she wanted to learn more about the sport, but she had limited access to resources and little interest from others in an area that is attractive for millennials.

“I had no one to go to for help with racing,” the 25-year-old Scott said. “There is not even a racetrack in the city, let alone anyone interested in horses. I didn’t have anyone to turn to ask questions. I was really left reading newspaper articles that were there on my own.”

One of the organizations that eventually helped Scott was Three Chimneys Farm in Versailles, KY. Once the late Roy and Patricia Chapman of Someday Farm retired Smarty Jones, Scott contacted the farm for more information.

In return, Three Chimneys provided stallion brochures, hats and other materials that eventually led to a farm visit when she was 14 and an internship while she attended the University of Kentucky as a dual major in equine science and marketing.

“I became Smarty Jones’s No. 1 fan,” she said. “Three Chimneys was so good and had so much foresight. When Smarty Jones retired, it was important to them and the Chapmans that he was at a place where fans could visit him. Three Chimneys is always very receptive to me.”

Since writing that first letter to Three Chimneys, Scott’s career in the Thoroughbred industry has evolved.

After graduating from college three years ago, she participated in the Godolphin’s Flying Start program, an international program that provides training in management and leadership in the Thoroughbred industry. Her industry training has included externships with Christophe Clement in New York, Gai Waterhouse and Adrian Bott Racing in Australia, and Zabeel Stables in Dubai.

Now, Scott is using her past experiences – with the support of others – to develop Amplify to reach out to those under 30-years-old.

Along with receiving the support of Jason Litt, who is Scott’s employer at Solis/Litt Bloodstock for the past year and board member of the Kentucky Thoroughbred Association’s Marketing Committee, as well as fellow board member Price Bell of Mill Ridge Farm and Horse Country, Amplify reflects her business plan when she was part of the Godolphin Flying Start.

“This concept started when I was in a course with a designed business plan for Flying Start,” she said. “This is something that we have been talking about for over a year with Jason Litt. Jason has been so critical for getting this off the ground. He has been so fantastic. He understands about racing’s ends and the need to engage more young people and try to move our sport forward.”

Since starting its mission in June as part of the first phrase, Scott and her co-founder have introduced the program to 4-H Program students at various farms in Central Kentucky and to others at Fasig Tipton in Lexington, KY.

“The first phrase of Amplify is providing resources to those who are already interested in racing and interested in horses,” Scott said. “It would be a group of young people on the fringes in the industry. Maybe they are in racing or in pony clubs or 4-H. They are the low-hanging fruit, the people that racing should be reaching out to anyway. As we expand, we’ll work with community organizations.”

At the beginning of August, Amplify was expanded to Saratoga.

Through a collaboration with NYRA and using resources already in place including backstretch tours and an opportunity to spend a day at Saratoga Race Course, Amplify developed an enhanced experience that included meeting Mark Casse and Preakness winner War of Will during the first week of August.

Besides providing resources and an enhanced experience for anyone attending these events, Scott also wants people – regardless of the outcome – to have at least a positive perception of the sport and industry.

“When we host an event and 20 people come, the worst-case scenario is now there are 20 more people who have a positive perception of racing,” she said. “The best-case scenario is one of those 20 people remembers how much fun they had, and when they are 30, they buy a racehorse. Whether we are creating more positive perceptions, or more people want to be fans or bettors, or eventually work with or own horses down the line, it’s all good stuff for racing.”

To learn more about the Amplify program, visit the website at amplifythoroughbreds.com or email at This email address is being protected from spambots. You need JavaScript enabled to view it.

More in this category: « From Construction to Horse Racing, Hamm Builds a Hobby into a Business DeVaux Building a Plan from a Solid Family Background, Patience and Support »
back to top