This winter is certainly giving us plenty of snow. As I glance out into the white wonderland and watch the children in our neighborhood play, I reflect on some of my own fondest childhood memories playing in the snow. I enjoy sharing this story with you each winter. I grew up during a time when the average was at least four children per household and you were literally thrown outdoors to play and told not to come back home until the street lights came on. Playing in the snow included making homemade sleds to slide down the golf course hills, making snowmen, and of course, building the best snow fort in the neighborhood.  In our house we divided up the tasks to ensure that our “fort” could withstand repeated attacks of snowball wielding elementary school kids. In the creation of our snow fort, my brother Danny was the engineer and he mapped out how high and thick the walls should be. My youngest brother Billy was the builder and shaped the inside of the fort for the chairs, refrigerator and snow TV. The baby of our family Patty was support staff.  Since I was the oldest of the Reardon children clan, I was the recruiter and went door to door finding my soldiers and builders.  We were not allowed to use the phone back then (adults only), so when I came to the door and knocked you could hear a stampede of children in the house trying to get to the door. To get them to work on the fort I would tell them that my mother was making meatball sandwiches!  My mother’s meatballs were the envy of the neighborhood and far exceeded the bologna and spam the other kids were getting. My first stops were Dave and Karl’s houses and they lived next door to each other.  They were my age but already almost as tall as most of our fathers at the age of six. Dave turned out to be 6’8” and Karl is 6’6”. If you want your walls to be the highest, I thought, get the tallest kids.  My mother would grimace when she saw them coming as she knew she would need a lot more meatballs. Our first forts were wrecked at night by teenagers until my brother Dan came up with the idea to put water on the outside walls and it would turn them to ice.  You could hear the howls of the mean teenagers when they kicked the walls and they didn’t give so easily.

To this day, when I talk with some of my childhood friends, they join me in reminiscing about the fun snow forts, and the reward of my mother’s meatball sandwiches. To this day, her meatballs remained unparalleled. However, Paula’s meatballs are on target with them especially since my mother did share her “secret” method with Paula.

At Compliments to the Chef, your Neighborhood Kitchen and Cutlery store, we carry skillets to make your meatballs in, saucepans to make your sauce, baking sheets to pop your meatball hoagies into the oven with, and other really “Cool Tools for Cooks.” Meatball Hoagies are a great way to deal with these frosty winter days.  The neighborhood kids will love you!! Remember my Foodie Friends: “Life Happens in the Kitchen.” 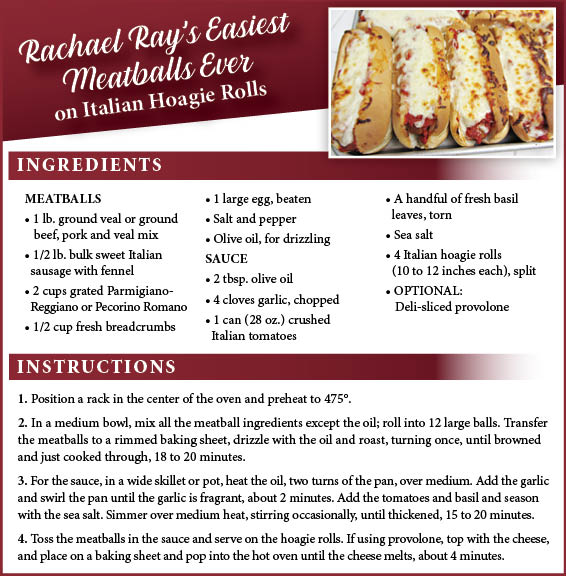 More in this category: « The Magic of Sowing Seeds Like “Buttah” »
back to top