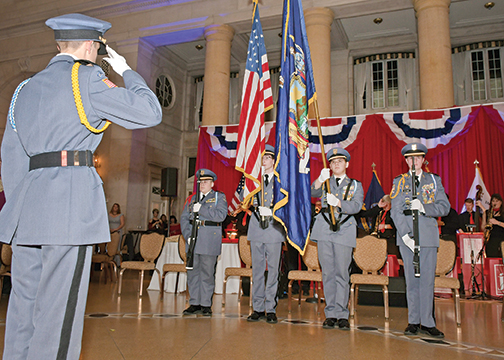 A memorable highlight of the evening was a special tribute to area WWII Veterans who were each ceremoniously honored and presented with quilts tenderly made by The Sunday Sewing Sisters.

A special feature of the evening was a tribute to local
Veterans who served in different Branches and Conflicts.
The list of Honored Veterans included:

A very touching tribute was made by Veterans and Community Housing Coalition’s Executive Director, Cheryl Hage-Perez, to SSG Derek J. Farley, United States Army 2004-2010 as a Fallen Hero who died in combat in Western Afghanistan in 2010 at the age of 24. The evening also included a special tribute to the Veterans Business Council for their continued service in going above and beyond to help the homeless Veterans served at VCHC.

More in this category: « Will Drafting Considerations When You Have Children Leatherstocking Honor Flight Takes Vets to Visit Their Memorials in Washington, D.C »
back to top