Sophisticated Pub Fare with a Flare 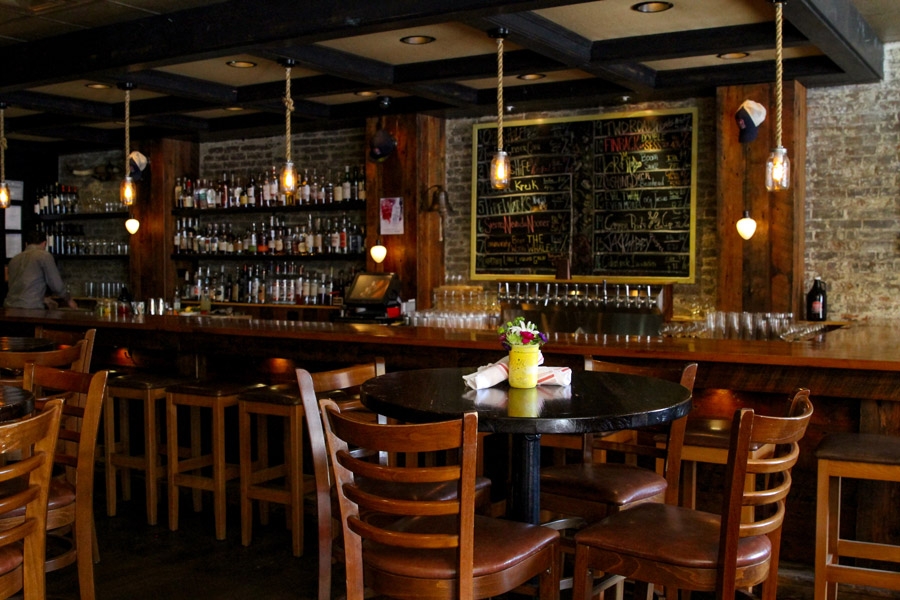 This is an article from our publication: Saratoga Mama, out now! Or view it online!

Ryan and Sonja McFadden talked about opening their own taproom and restaurant for a couple of years before the perfect space became available on Henry Street. The couple were living in Philadelphia, where Ryan practiced law and Sonja taught kindergarten. But they shared a passion for great food, cheeses, and great brews. As their knowledge and expertise in food and beer grew, they started to look seriously for the right venue.

Sonja is a graduate of Skidmore and the couple liked the vibe of Saratoga. They began looking downtown and keeping their eyes open for the right opportunity. When the space on Henry Street became available, the couple pounced on it.

That was five years ago.

Today, Henry Street Taproom is a popular haunt for east side residents, out of towners, and people who want to venture off Broadway to see what other treasures are tucked away on the cozy little side streets and alleys. Although Ryan and Sonja now have two toddlers to keep them busier than ever, they continue to be heavily involved in all aspects of the operation. And the locals appreciate it. Stephanie Piccolo, who has been on the staff at Henry Street since they opened, says they have had “regulars” since Day One.

And for good reason.

Chef Matt Weekes, a graduate of the SCCC culinary program, began at Henry Street Taproom as sous chef and quickly moved up to the position of head chef. In the process, Weekes has elevated pub fare to a new level of sophistication, flavor and flare, while adhering to what he calls “good solid foundational cooking.”

Paired with that solid foundation is the
thirst-quenching assortment of beers, ales and,
of course, signature cocktails created by bar manager, Andras (Drew) Janik, another culinary grad and a well-known and well-respected face in the Saratoga restaurant scene.

The team from Saratoga Today who were on hand recently to sample some fine fare and libation included our creative director, Chris Vallone Bushee, and photographer Susan Blackburn. It was a perfect early summer day and the doors of Henry Street were wide open, reminding us of open-air pubs that line the streets of Dublin or Kerry.

After meeting Ryan, Chef Weekes and members of the staff, we started off by sampling three of the featured seasonal cocktails Drew and his staff created. The first libation on the list was a modern take on an old bar favorite – the “Taproom Sidecar.” This traditional cognac-based drink was livened up by the addition of blood orange liqueur and Remy Martin VSOP. We proceeded to sample some “Summer Glovin,” consisting of a delightful combination of house cider, infused with a blueberry-flavored simple syrup, and a zesty lemon peel. We finished off our taste fest with “Uncle Razz’s Fresh Lemonade,” a refreshing and brilliantly-flavored fresh-squeezed lemonade, with a raspberry-basil puree and Tito’s vodka. Yum!

While sipping on cocktails, we were treated to an eclectic assortment of small plates – which appear on the menu as “snacks.”  A summery green gazpacho, made with a base of cucumbers and oregano, with Greek yogurt, pistachio, mint and – of course, the kicker – jalapeno, all pureed together, resulted in a creamy and refreshing summertime soup with a nice bite at the finish.

Also on our menu for the afternoon was Farm Toast – a “must have” for lovers of deep, earthy-flavored local Chanterelle and oyster mushrooms, blended with the most amazingly creamy fresh ricotta atop house-made sourdough.

The pan-roasted radishes were another example of fresh from the garden local produce, artfully combined with miso butter and pan-roasted to create a creamy, buttery freshness that re-defines “comfort food.”

Our “Simply... the best!” turned out to be the Soba Noodle Salad – a six-minute egg, combined with the nuttiness and earthy flavor of noodles with ginger scallion sauce, pickled shitakes and spicy peanuts.

For purveyors of more traditional pub food, Henry Street Taproom aims to please all palates. Their menu also includes some standard favorites, such as fried fish and chicken sandwiches, a juicy Taproom burger with Adirondack cheddar, bacon, caramelized onion, pickles and their own special sauce.

For lovers of cheese and charcuterie, there is a separate menu devoted entirely to cheeses, meats and sausages from as nearby as Cohoes and Thurman, NY to places as distant as Italy,
Spain and Holland.

Somehow, we managed to finish off our cocktails and realized that we wouldn’t be doing honors to Henry Street Taproom if we failed to sample a “flight” of IPAs, ales, and stouts on tap. Henry Street boasts 16 of the best craft beers and ciders from around the world. On this day, we sipped away on a lighter IPA, with notes of citrus, a Lambic with a rich, sour-sweet and fruity flavor, as well as a smooth Belgian and a decadent Imperial Stout by Evil Twin, with a big cocoa flavor for those who want to have their cake – or cocoa – and drink it too!

And speaking of cake, our trio was treated to a simply amazing lemon blueberry bread pudding, using their signature house-made Pullman bread and lemon curd, with a decadent buttermilk icing. The perfect end to an idyllic afternoon on Henry Street!

Henry Street Taproom is currently open weekdays from 4 p.m.-12 a.m. weekdays and Noon-12 a.m.
on Saturdays and Sundays. Ryan and Sonja have also expanded into the vacant space next door, which will give the taproom an additional 1,200 square feet of space, an open-air patio with a wood-burning fireplace, and a shuffleboard table. Ryan and Sonja plan to have the new space open in the next month and they are excited to offer seating for larger parties and private events. They also have plans to open for brunch on the weekends in the coming year.