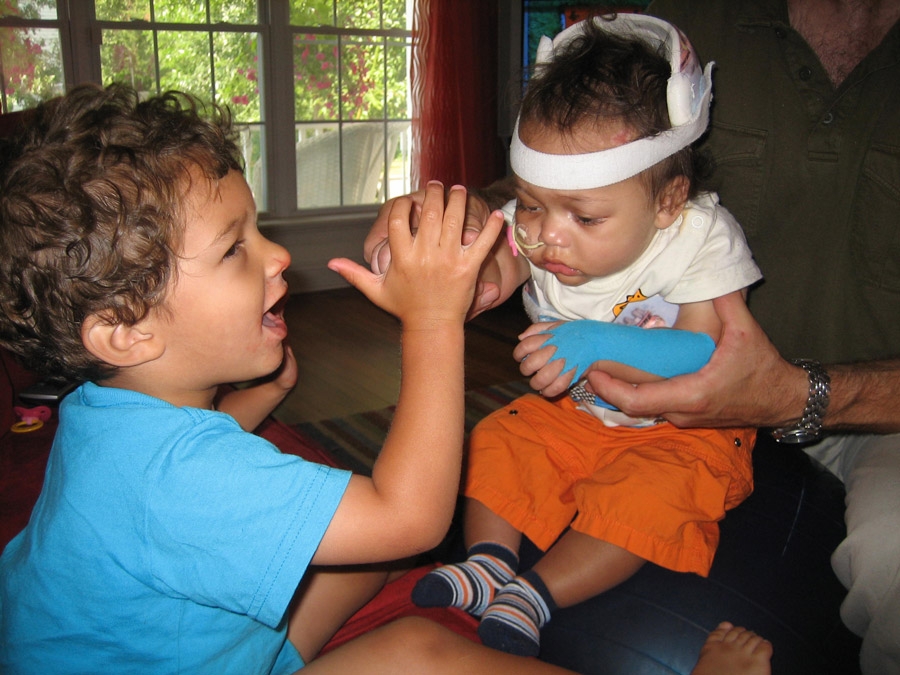 This is an article from our publication: Saratoga Mama, out now! Or view it online!

A mere 15 months separated Brian and Heather Straughter’s two sons, Ethan and Jake. The family lived in Boston, but Heather – who is an only child and comes from the Capital Region – began to experience that familiar desire to raise her children closer to her family. When Jake was just two months old, they returned to Saratoga.

Both Jake and Ethan were healthy and vibrant boys, and Jake wasted no time in trying to keep up with his big brother. Ethan adored having a little brother around to copy him and teach him the rough and tumble ways of boyhood.

So, it was a real surprise when, at eight months old, Jake experienced a seizure in the middle of the night. Other than his hand, which would not stop pulsing, Jake was acting normally and Heather hesitated a moment before making the decision to get medical help. It was 2 a.m. and she didn’t want to call her pediatrician. Instead, she brought Jake to the Emergency Room at Saratoga Hospital.

“Unfortunately, there were no pediatric neurologists on staff at Saratoga Hospital at that time, which resulted in a delay in treatment. However, it quickly became apparent that the pulsing hand was more than a muscle spasm and the Straughters were taken by ambulance to Boston Children’s Hospital.

Their trip was further delayed when Jake’s condition began to worsen. They were forced to stop at the hospital in Springfield, where they stabilized Jake so he could make the rest of the trip. Things got worse there, however, when Jake suffered a severe reaction to the medication he was given. A full day later, he was flown from Springfield to Boston Children’s Hospital. The Straughters spent the next 117 days in the hospital with their son.

“They never really quite figured out what it was that Jake had. And there was never an official diagnosis which explained what happened with the seizures and loss of milestones at 8 months. While he fell under the category of epilepsy, cerebral palsy, osteopenia (among others) when he died, none of these diagnoses were the cause of death or explained his illness. We (and his medical team) considered him undiagnosed at the time of his death,” said Heather.

Jake’s illness took the Straughter family on a new journey – one they never expected to take, and one that has created unexpected heartbreak as well as joy.

After the Straughters brought Jake home, Heather devoted herself full-time to caring for her son. All the developmental milestones Jake achieved in his first eight months were erased by this awful and unexpected disease. Heather’s background as a special needs teacher involved advocating for the children under her care. Now, she became a ferocious and determined advocate for her own son.

During the next four and a half years, Jake worked hard to regain some of the achievements he had made, with his family fighting right alongside him. He managed to eat by mouth and take small assisted steps, using a lite gate. Despite his tremendous strength, courage and spirit, Jake passed away suddenly and tragically on December 8, 2010.

Even though Jake was ill, his sudden death was still devastating. In the difficult days following Jake’s death, the family talked about the many lessons they learned on their journey.

“While the odds of having a severely ill child are so small, we still knew that there must be so many families out there who couldn’t put their jobs on hold like we were able to, to spend 117 days with Jake in the hospital,” said Heather.

“We were so fortunate to be able to be there for every step of Jake’s journey,” she added.

It was very soon after Jake’s untimely death that Brian and Heather decided to start their own foundation to help medically fragile, special-needs individuals and their families. On March 17, 2011, Jake’s Help from Heaven was incorporated as a 501c3 and a board of directors was formed.

One of the lessons the Straughters learned during their time caring for Jake was the difference between equipment deemed “medically necessary” and equipment considered “medically convenient.”

“Insurance only covers the purchase of one feeding system or one wheelchair every five years. If you have a seven-year old trying to fit into a wheelchair that you bought when he was two, it’s going to make a big difference.”

In addition to providing equipment and supplies to families in need, Jake’s Help from Heaven also reimburses families for medical travel, hotels and food when they must travel for treatment.

The Foundation helps families within a 100-mile radius of Saratoga, and the Straughters personally deliver equipment to each family chosen to receive help.

The Board of Directors receives approximately 50 applications each quarter and, in 2016, they surpassed their goal, donating $127,000 in equipment and reimbursements. Heather said they come from “a place of saying yes,” and will make awards to families who can demonstrate their need.

She also said they have discussed widening their geographical reach; however, she feels the Saratoga Springs community has been so generous and it is important to be able to say the donations made, go toward helping people right here, in the community.

When I asked Heather how Ethan – now age 12 – is doing, she replied, “We have a wonderful and very compassionate son.”

Jake’s Help from Heaven holds three fundraisers throughout the year, which are posted on their Facebook page. They also accept donations online at their website:
www.jakeshelpfrom heaven.org.

Read 1824 times
More in this category: « Mums and Asters Sophisticated Pub Fare with a Flare »
back to top