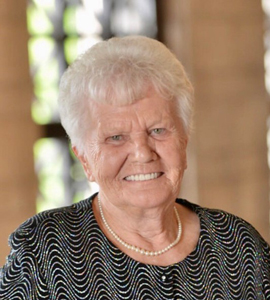 SARATOGA SPRINGS – Edith Gleussner, beloved mother of Bill and Margaret, grandmother of Adam, Andrea, and Katherine, great-grandmother of James and Simon, and foster mother of 27 children who needed her love and nurturing in difficult times, passed away on September 14, 2021 at the Washington Center for Rehabilitation and Nursing in Argyle, NY.

Edith was born in September of 1935 in Germany. She was the middle child of 11 raised by Richard and Emily (Tews) Foerster. Her early childhood was marked by the disruption and horror of war.

At the age of 20 she emigrated to Montreal, Canada, where she met, fell in love with, and married Fritz Gleussner. There they enjoyed rowing in the Montreal Rowing Club. They then moved to Brooklyn, NY where they both worked for the Brooklyn Catholic Archdiocese. They then worked for the owners of the Fluor Engineering and Construction Company in California as a husband and wife team managing the family household and helping to raise their children.

In the early 1960’s they moved to Morris, NY to own and operate their family farm. Edith’s parents and many of her brothers and sisters and their families later joined them in Morris.

In 1982 Edith worked for Mirabito Fuel as a cashier, and in 1983 she began 25 years’ working as a cashier in the Oneonta State College food services. Upon retirement, Edith moved to Saratoga Springs to be near her daughter, later moving in with her family following the birth of Edith’s youngest granddaughter.

Most recently Edith lived at the Washington Center, where wonderful caregivers knew her for her sweetness and humor.

Edith’s greatest joy was spending time with her grandchildren as they grew and matured. First with Adam and Andrea in New York and Ohio, and later living with granddaughter Katie in New York.

Edith loved and was known for her beautiful flower gardens.

She is predeceased by her parents and siblings Erika Klabisch, Hans Foerster, Gerda Riebel, Gunther Foerster, Heinz Foerster, Manfred Foerster and Helgia Foerster. She is survived by siblings Winfried Foerster, Brigitte Holik and Renate Foerster, son Bill (and wife Marsha) with grandson Adam (and wife Niki) and their two children James and Simon, granddaughter Andrea (and husband Chris Colaluca), and daughter Margaret (and husband John) and granddaughter Katherine, and also many nieces and nephews.

A graveside service will be held on Saturday, September 18 at 11:30 a.m. at the Hillington Cemetery in Morris, NY.

Arrangements are under the direction of the William J. Burke & Sons/Bussing& Cunniff Funeral Home, 628 N. Broadway, Saratoga Springs, NY 12866 (518-584-5373). Online remembrances may be made at www.burkefuneralhome.com

More in this category: « Kathleen A. Nokes (Patterson) Barbara O’Brien »
back to top