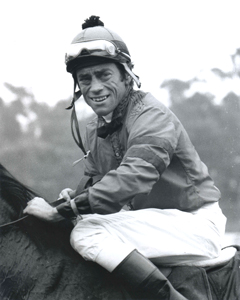 ILLINOIS — A class act both in and out of the saddle, Hall of Fame jockey John Rotz died peacefully at the age of 86 at his farm in Warrensburg, Illinois, on July 12. Rotz, who won 2,907 races and was inducted into the Hall of Fame in 1983, was North America’s leading stakes-winning rider in 1969 and 1970, when he rode Hall of Famers Gallant Bloom and Ta Wee, as well as champion Silent Screen.

Born Dec. 16, 1934, in Niantic, Illinois, Rotz went to work at Fairmount Park following his graduation from high school in 1952. He started out as a groom, hot walker, and exercise rider before making his debut as a jockey in 1953.

Known as “Gentleman John,” Rotz began his career riding in fairs in the Midwest before becoming the leading rider in New York in 1961 and 1962. He won the Preakness Stakes by a nose aboard Greek Money in 1962 and the Belmont Stakes on High Echelon in 1970.

Polite, articulate, dependable rather than flashy, his opinion was valued by trainers both before and after a race. Rotz had a gentle touch with temperamental horses and was known for his success with fillies. He won the Acorn and Mother Goose on Deceit and won notable races aboard top fillies such as What a Treat, Rose Bower, Obeah, Castle Forbes, Indian Maid, Rash Statement, and Chou Croute.

Rotz won the Metropolitan with both Hall of Famer Carry Back and In Reality, the Wood Memorial on Globemaster and No Robbery, and the Champagne on Roman Brother, Silent Screen, and Stop the Music. He also rode Hall of Famer Dr. Fager, as well as Verbatim, The Axe II, and Mongo.

Rotz, who was honored with the George Woolf Memorial Jockey Award in 1973, retired from riding that year at the age of 39. His 2,907 wins ranked 15th at the time. He later served as The Jockey Club steward in New York.

More in this category: « Kenneth R. Sunshine Bruce Hiscock »
back to top