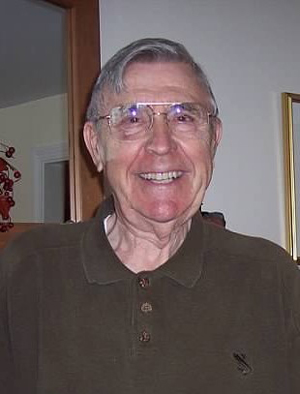 SARATOGA SPRINGS — George A. Moline, 95, of Saratoga Springs, beloved husband, companion and best friend of Jean, passed from this life on May 15, 2020 at the Home of the Good Shepard in Saratoga Springs.

George was the devoted father of Erik (Gloria) of Biddeford, ME; Kristin Spitzinger (William) of Gray, ME; Kirk (Robin) of Wilton, NY; and Andrew (Judy) of Clifton Park, NY; Grandpa of Dawn, Jonathon, Anna, Jacob and Annika; Great-Grandpa of Thomas, Brady, Ava, Nora and Macy. He was preceded in death by his parents, his sister, Marcella Rauker, his wife, Jean, his daughter, Kristin Spitzinger and his son, Erik Moline.

George volunteered in the Army Air Corps prior to graduating from Cambridge High School in 1943. He served as a B-29 navigator during WWII in the 382nd Very Heavy Bomb Group. He was commissioned a 2nd Lt. on active duty in 1944 and discharged in 1946. And, after the war, promoted to 1st Lt. in the Air Force Reserve until 1959.

On the GI Bill, he attended Gustavus Adophus College and the University of Minnesota, earning a degree in Mechanical Engineering in 1949. He joined General Electric and worked 35 years during which time he held management positions in Engineering and Manufacturing in Turbine/Generator and several other departments and locations.

George and Jean were communicants at St. Paul’s Lutheran Church, and he was a member of the GE Elfun Society, Turbine Supervisors’ Assoc., Quarter Century Club, and Wood Butchers’ Carving Club.

Interment, with Jean, will be at 12 p.m., Wednesday, August 19, 2020 at the Gerald BH Solomon Saratoga National Cemetery with full Military Honors.