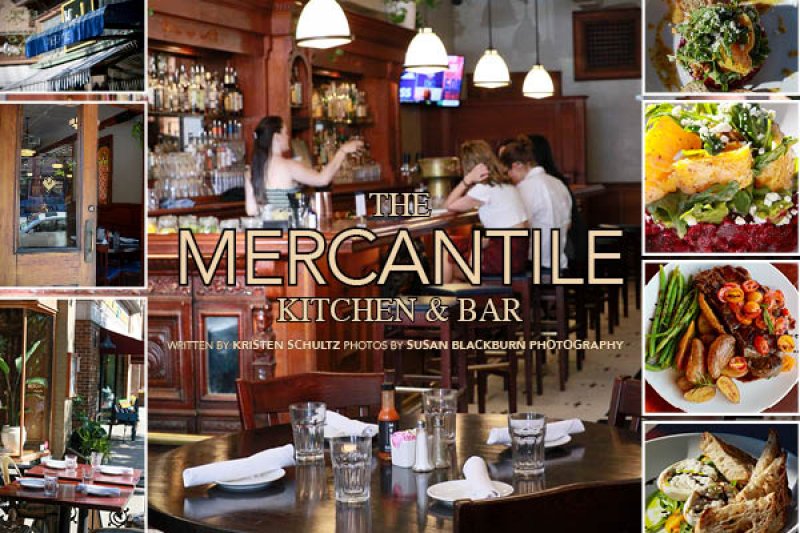 You can call it a kitchen and bar; that’s its name after all. But this 10-month old restaurant on bustling Broadway has the soul of a diner. The Mercantile Kitchen & Bar (or simply The Merc) opened in the space formerly occupied by Cantina – which moved down the street into what used to be Lillian’s – and aimed to bring a neighborhood feel and familiar, unfussy food to downtown.

The Merc has the hallmarks of a classic Long Island diner: breakfast until 3 pm, simple, affordable menu items and a natural gathering space. But it is a far cry from the chrome-clad, neon-lighted,  “Hey, sugar, what can I getcha” kind of eatery.

“I wanted to open a modern diner,” said co-owner Chris Luriea, who has worked in the restaurant industry for the better part of 20 years, including at Max London’s and Cantina.

“I’ve been working on this street for 15 years,” Luriea said. “I got to see it evolve. Saratoga is a big, small town and people know what they like.”

What the people like is good food and the chance to enjoy the brief, but beautiful spring, summer and fall seasons. Grab a seat outside on the patio or on the side of the restaurant, just tucked back from the sidewalk. The interior doesn’t disappoint where crisp white vintage-inspired floor tiles and sophisticated navy blue booths work together in a modern contrast.

When it comes to the food, Luriea and business partner Jeff Ames, who also owns Cantina, have opted for a restrained menu that emphasizes seasonal ingredients.

The roasted beet tartare salad balances the earthiness of the roasted red beets with tangy goat cheese, peppery arugula, creamy avocado, bright orange segments and toasted walnuts. It gets tied together with a honey mustard and is served with toast points.

Burrata is available year round, but for the summer, The Merc offers a textural and palate-pleasing counterpoint to the burrata’s sweet creaminess by pairing it with fresh, grilled peaches and tart cherry tomatoes.

Like a true Long Island diner, there is steak on the menu. The 12 ounce New York strip steak is one of six generously-sized entrees and comes with tender-crisp green beans, pan roasted fingerling potatoes with rosemary and just-burst sautéed cherry tomatoes.

For lunch or a lighter dinner, choose from a burger or a selection of six hot and cold sandwiches.

If it’s breakfast you’re after, don’t even set the alarm. The most important meal of the day is served until 3 p.m. All the usual suspects grace the menu: pancakes, eggs, corned beef hash and avocado toast. Listed between the build-your-own omelet and the Greek yogurt is The Merc’s take on eggs benedict.

The Benny sees three thin slices of Canadian bacon each atop halves of toasted English muffins. Two perfectly poached eggs get the royal treatment with a ladle of buttery-bright Hollandaise. There is just enough English muffin to soak up the yolk and the Hollandaise without leaving you with too much toast or a puddle of sauce.

You can enjoy The Benny in the morning with a cup of coffee or in the afternoon with a seasonal cocktail from the bar. The mango rum punch is tropical, smooth and sweet while in the cucumber cooler, lime and cucumber dance together for a bubbly sip. Seasonal berries make appearances in the raspberry mojito and the blueberry sparkle.

The rich bittersweet chocolate crème brulee with strawberries and whipped cream and the browned butter pound cake are both rich and not-too-sweet dessert options.

“Opening a restaurant is something I’ve wanted to do for a long time,” Luriea said. “It’s been a lot of work and I haven’t had a day off since two months before we opened.”

The hard work is paying off, though. His experience and willingness to listen to his customers and staff means that 80 percent of the original staff is still on board – a near miracle in an industry notorious for turnover. And while they’ve stuck mostly to the plan and been faithful to the original vision of running a modern diner, Luriea said he has also made changes based on customer feedback.

“Everyone has a voice,” Luriea said. “I want to know what the customers are digging and what they’re not.”

The Merc features live, local music on Thursdays and plans to start up a Thursday Supper Club in September that will run through the winter.

Although The Merc is not yet a year old, Luriea believes in its future success.

“I’m so appreciative of the community and the business,” he said. “If we give the people what they want, I think in 10 years we could be a staple, The Merc could be a household name.”

More in this category: « Jillian Ehrenberg: Persistence Rewarded Step Back in Time at the Northville Five and Dime »
back to top