How to resolve AdBlock issue?
Refresh this page
Subscribe to this RSS feed

SARATOGA SPRINGS — On Wednesday, March 15, the Saratoga Convention and Tourism Bureau (SCTB) held its 32nd annual meeting and dinner at the City Center. In addition to highlighting the successes of 2016 and ini- tiatives for 2017, the SCTB welcomed new members of the Board of Directors and Executive Committee. A crowd of over 165 bureau members, government officials and past chairs attended.

In addition to announcing the new board, the SCTB rec- ognized three 2016 Hometown Ambassadors, local people who brought their convention or event to Saratoga. The honorees were Nancy Trimbur, Soroptimist International of the Americas; Cassandra Latour, Association of YMCA Professionals; and Jeff and Becky King, National Holstein Association.

Also honored were SCTB volunteers of the year: Leonard DiLisio and Karen Longobardi for their service at the Saratoga Heritage Area Visitors Center and with the Convention Services team.

The Saratoga Convention and Tourism Bureau’s Annual Report for 2016 can be found on the website http://discover-saratoga.org.

In the photo gallery, Elizabeth Zarecki is on the left and Tressie LaFay on the right. Photos provided.

SARATOGA SPRINGS — Tressie LaFay, a copywriter, and Elizabeth Zarecki, an account director, are the newest hires at the Patient Experience Project (PEP), a full-service, patient- centric communications and marketing agency based in the city.

LaFay is responsible for writing content across various media, including print and digital formats. Before joining PEP, she worked at SUNY Adirondack where she was responsible for writing and securing multi-million dollar grants, coordinating the college’s Title IX program, and assisting the President with numerous strategic, managerial, and com- munity-focused initiatives.

nursing and public health students. She earned her master’s degree in narrative medicine from Columbia University in New York City and her bachelor’s degree in English from the University of Vermont in Burlington.

Zarecki works directly with cli- ents on the day-to-day planning and execution of brand strategies and tac- tics. She ensures projects are com- pleted on time, on budget, and with the highest quality.

Previously, Zarecki supported pharmaceutical and healthcare clients through her work at the firms CDM Princeton and Rosetta in New Jersey. Zarecki received a bachelor’s degree in advertising, with honors, from Syracuse University’s S.I. Newhouse School of Public Communications.

MALTA — Earlier this week, the Malta Town Board temporarily held up the approval of a bid for seasonal trash hauling over concerns about the town’s trailer parks and apartment complexes.

Those types of properties would have been excluded from participating in the spring pickup program.

According to Malta Comptroller Kevin King, the only bidder was County Waste in Clifton Park. The board voted against paying the company a $29,500 fee for hauling away residents’ unwanted clutter and debris, plus a disposal fee of $65 per ton.

King said the amount of $50,000 had been budgeted previously for that expense.

Councilman John Hartzell was quick to question why County Waste had specified in its bid that trailer parks and apartment complexes were to be excluded this time around.

“I don’t think it’s fair to town residents who pay property taxes. They’re citizens, too,” Hartzell said. “I’m not prepared to say they can’t avail themselves of services.”

County Waste, King informed the board, considers trailer parks and apartment complexes commercial properties, which are free to contract for trash services at any time.

Still, Hartzell made a motion to reject the company’s bid until such details could be arranged.

County Waste officials did not return a request for comment.

Malta Supervisor Vincent DeLucia queried King and other town staff members in the room about how to resolve any differences with County Waste. Then all four board members present approved Hartzell’s motion to reject.

“We can’t force them to do business with us,” DeLucia said. “That’s the bottom line.”

In other business on March 20, the board voted to approve a resolution that officially designates Malta a Purple Heart town for the sake of soldiers wounded in combat. In neighboring Halfmoon and other towns, such resolutions often lead to the installation of honorary road signs and possibly community events.

A U.S. Army veteran, Master Sergeant Scott Kyle, gave a presentation to the board accompanied by two more members of the Military Order of the Purple Heart. Kyle leads the group’s Albany chapter and coordinates local outreach efforts.

Kyle, after describing his run-ins with explosives three times during combat in Afghanistan, spoke about the growing number of New York towns that are thusly honoring soldiers awarded the prestigious Purple Heart medal.

“It’s so that communities are always doing something for our veterans,” Kyle explained to DeLucia, Hartzell and the other board members.

Kyle displayed for all present how each Purple Heart medal is etched with the image of President George Washington. Reportedly, Washington had first begun awarding the nation’s combat medals on August 7, 1782. Memorial ceremonies are being planned on that summer date later this year.

The state of New York and a total of 34 towns and counties, Kyle said, have passed such Purple Heart resolutions. But some communities, he added, have resisted the move.

“There are places that don’t want us there, and it’s pretty disheartening,” Kyle concluded.

SARATOGA SPRINGS — As part of the Advance Saratoga Startup initiative to promote, retain and grow business and jobs in the region, the Saratoga Economic Development Corporation (SEDC) is enlisting community input to develop the permanent name of this business accelerator.

Through Tuesday, March 28, the SEDC invites the public to vote at www.nametheincubator.com for their top three names of this early stage company accelerator and entrepreneur incubator.

The winning name will be unveiled at an event with regional community and business leaders, entrepreneurs and students featuring the regional premiere of the movie “Generation Startup” on April 12 at Bow Tie Cinemas at 5:30 pm.

SARATOGA SPRINGS — On March 22, members of the Saratoga Springs Downtown Business Association (DBA) voted to approve a new board. 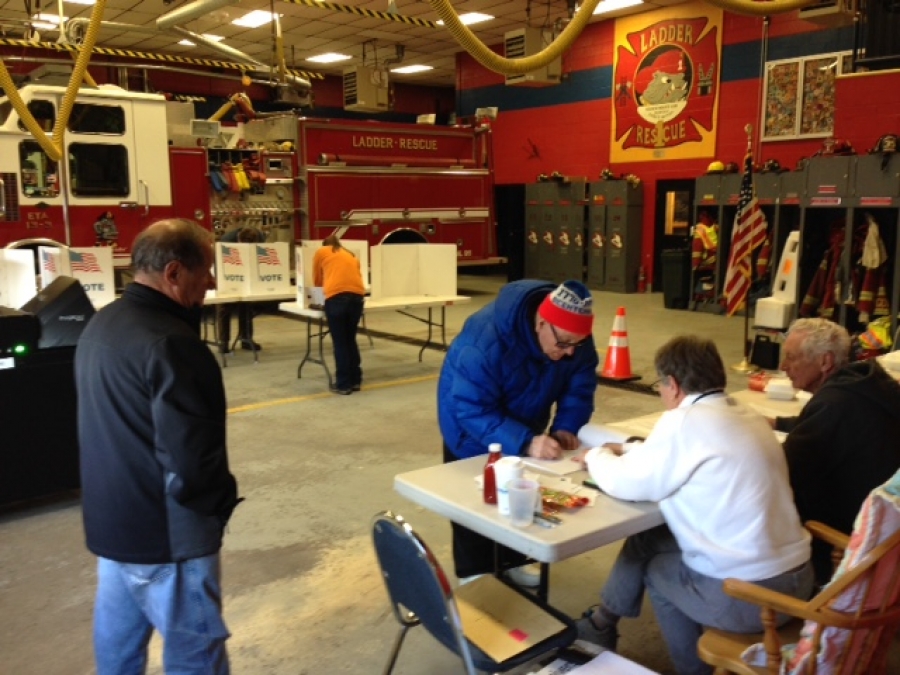 BALLSTON SPA — Two out of three Democrats achieved polit- ical victory this week in a vil- lage government controlled for decades by Republicans.

Democrats Shawn Raymond and Noah Shaw both won seats on the Ballston Spa Village Board by a combined total of roughly 100 votes. Republican Village Justice Michael Morrissey held on to his seat by 70 votes despite a significant tally of 363 for his challenger: Erika Tebbens, a third Democrat in the race.

The results in Ballston Spa were announced shortly after 10 p.m. in a crowded Village Hall on Front Street. “Congratulations to the winners and the losers,” stated Mayor John Romano, after the final two boxes of ballots had been delivered by election officials.

Throughout the day, more than 2,300 votes were cast inside the village’s two firehouses—twice as many as during the 2015 elec- tion. Romano said the village has about 4,400 eligible voters.De

Carpenter edged candidate Jason Young, a Schuylerville restaurant owner, by about 30 votes, while candidates Nikki Proctor and Bryan Drew also were chosen by voters to fill two trustee seats on the Village Board.

A total of roughly 900 votes were cast for all five candidates in the race.

Visitors Up at Battlefield

STILLWATER — In 2016, the 100th anniversary year of the National Park Service, visitation increased by 58 percent from the previous year at Saratoga National Historical Park. More than 102,000 visitors were counted.

Ranger programs, guided hikes, musiceventsandchildren’sprograms take place every month at the park. For a full calendar of events, please see the park’s website at www.nps. gov/sara.TheVisitorCentercanbe reached at 518-670-2985.

Charity for Kids in Hospital

Glens Falls Hospital and Saratoga Hospital each received checks for $1,000 and a supply of stuffed animals to be given to chil- dren in their care.

TCT and their members have a long history of raising money for the Children’s Miracle Network, which supports the Children’s Hospital at Albany Medical Center.

Expanding upon that suc- cess, TCT decided to help pedi- atric patients at the hospitals located in their service area as well. Funds were raised by dona- tions from credit union mem- bers and staff. For a $10 donation,

donors received Penny the Panda – the TCT Care for Kids stuffed animal for 2016.

This year’s campaign kicked off in March with the arrival of Hootie the Owl. Donations are being accepted through April 30 at any of TCT’s four branch locations.

WILTON — Two local developers are in the early stages of seeking approval from town officials to build a new neighborhood north of the Wilton Mall retail district.

At its regularly scheduled meeting on March 15, the Wilton Planning Board discussed the formal pre-applications submitted by DCG Development and Belmonte Builders.

The two Clifton Park developers are proposing separate projects for the construction of about 250 single-family homes on nearly 550 acres northwest of the Jones Road and Putnam Lane intersection.

The new homes would occupy land behind the Wilton Emergency Squad building on Harran Lane.

“It’s a considerable amount of property,” said Lucy Harlow, executive secretary of the Wilton Planning Board. The homes “are not all going in at once,” she added, but “in phases.”

Harlow could not say for sure when the Planning Board is expected to give final approval to the developers’ applications. “There’s several approval levels,” she said, noting how environmental and traffic impacts still have to be studied and considered.

Also, public hearings for the projects have yet to be scheduled.

Several months ago, the Wilton Planning Board referred the DCG Development proposal to the Town Board for review, even though the former body is empowered to give such projects their final approvals.

According to minutes of the December 1, 2016 town board meeting, Councilman John McEachron and other board members discussed the importance of extending water and sewer lines to the project site.

State rules mandate that subdivisions of 50 lots or more have to be serviced by public systems rather than private wells or tanks, Harlow said.

“There are a lot of people in town who had their wells dry up,” McEachron said, according to the meeting minutes. “We can’t see that in the future.”

The Wilton Water and Sewer Authority currently provides public services to homes and businesses on the western side of the Adirondack Northway, but not on the eastern side of the highway where the new developments would be located.

Michael Mooney, director of the authority, expressed confidence that there would be no difficulty meeting any demand from the new development.

“We have plenty of water. We’re not even at our capacity now,” Mooney said, noting how Saratoga County supplies hundreds of thousands of gallons each day to the authority.

On a daily basis, Mooney added, the typical home uses 200 to 300 gallons of water.

Harlow explained that approvals of the construction projects largely hinge on the provision of water and sewer, and who will incur the cost of installing new service lines. The developers also would have to construct roads for the new neighborhood.

Published in News
Tagged under
Be the first to comment!
Read more...
Page 24 of 26