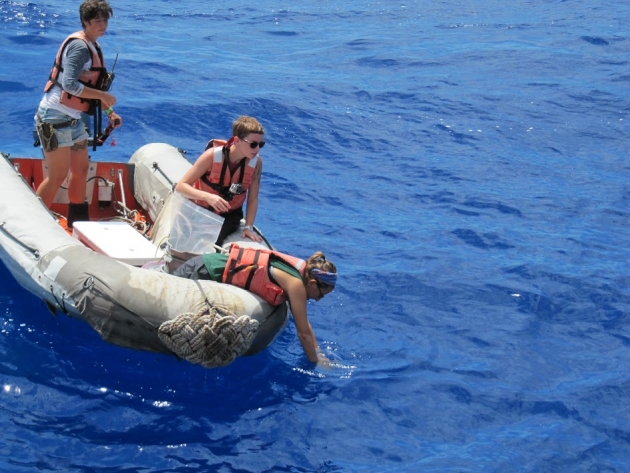 An Unforgettable Journey in Marine Ecology

The 2013 graduate of Saratoga Springs High School has always been comfortable around boats, growing up around them with her father’s businesses, Saratoga Boatworks locally and Champlain Boatworks in Plattsburgh.

“My dad sells powerboats, but we’ve been sailing,” said Olson. “I chose the SEA semester because it wasn’t a full year and the sailing component really interested me.”

Olson is an environmental science major and rising third year student at Northeastern University in Boston, Massachusetts. She had always been interested in science, and considered neuroscience for a bit, but remained drawn to environmental studies.

“Now that I’m deep in my major, I’ll look back at things I did as a little kid,” she said, “like play with bugs, or hold my birthday party at the nature center in Bolton Landing. It’s always been the natural world for me, and I’ve decided I want to protect and conserve it.”

Olson applied to SEA for its semester abroad program and was accepted. The program ran from March 23 to June 13, beginning and ending with a shore component that took place both in Woods Hole and in Bermuda. The sea component ran from April 20 to May 22, five weeks aboard the SSV Corwith Cramer, a 134-foot twin mast tall ship. The ship’s complement included 20 students and 12 crewmembers. There were fourteen female and six male students, and only one male crewmember other than the ship’s captain.

“There were lots of great female role models,” said SEA Semester Program Director and Chief Scientist Amy Siuda, Ph.D. “On these journeys, female science students get a real opportunity to be in leadership roles, taking charge of the science and taking charge of the ship, building confidence as well as knowledge and skill.”

Having sailed before, Olson thought she knew what she was getting into. “If you’re on the boat, you’re working,” she said. “They’d tell us, the SEA semester doesn’t take any passengers.”

The work began long before they boarded as Olson and her classmates crunched through a very intensive introductory shore component providing the students with background knowledge on research, including courses on oceanography, biodiversity, and public policy.

The marine biodiversity and conservation focus of the semester was on the protection of the Sargasso Sea within the Atlantic Ocean. Located off the coast of the United States in the western north Atlantic in the middle of a gyre (large system of rotating ocean currents), there is no official jurisdiction for the Sargasso Sea, making it particularly difficult to create and enforce environmental protection – or any – public policies. The closest landmass is Bermuda.

According to Siuda, who is also an associate professor of oceanography and a SEA Semester alumna, SEA is a collaborating partner with the Sargasso Sea Commission, an organization started by the government of Bermuda and maintained with a nonbinding Hamilton Declaration signed by Bermuda, the United States, Great Britain, Monaco and the Azores.

“In the broader sense, this program is contributing to the professional effort to protect the Sargasso Sea,” said Siuda. “The students sail through it so they can collect data, but also so they can experience the sea personally. It’s hard to understand and want to protect something if you don’t know what it’s like.”

Olson’s research focused on Sargassum, a species of seaweed native to the Sargasso Sea and for which the Sea gets its name. It grows in thick, gigantic masses the size of football fields that has been known to make it nearly impossible for ships to sail through. Known for its beautifully blue waters, the Sea has been referred to as a golden, floating rainforest due to the seaweed.

“Students are getting first-hand data,” said Siuda. “Sargassum is the iconic species of the Sea. Liz was always incredibly enthusiastic about delving into the samples. They were working with microscopes, DNA, and doing real research that will help inform real conservation efforts.”

Olson found the work fascinating. “The gyre keeps the area nutrient-poor, so the Sargassum is an ocean of life there. The whole ecosystem would not exist without the seaweed, and it’s not anchored to the sea floor.” She studied its genetic makeup and unusual geographic sightings, all while sailing from Puerto Rico to Bermuda to New York City.

“Yes, we sailed through the Bermuda Triangle,” she laughed. “We survived.”

They were underway for five weeks, helping to run the ship as well as conduct their studies.

“It was all very new,” Olson said. “I have never had to be on a watch schedule before. You don’t ever stop sailing, so the watches don’t stop. Every three days was one full rotation through the schedule. We never slept for more than three or four hours at a time. And a standing watch is just that, you can’t sit down.”

Siuda agreed that running a ship 24 hours a day far from land is hard work. “My favorite part of these programs is the off-shore crews,” she said. “Just blue water all around with no land in sight, and there is only the community on the boat and the environment around you. In that situation, you need to be contributing time both on and off watch, which Liz was very capable of doing.”

Watches included looking out for ship traffic, being at the helm steering the ship, helping out in engineering or cooking in the galley, among other tasks. “We ate very well,” Olson said. “We had a very skilled steward. She prepared three good meals and three snacks a day, which we needed considering all the heavy lifting and work we were doing. I’d call it American food, with chicken and beef and such, but I’m a vegetarian so I didn’t have that. The food was really good.”

Siuda noted that the program particularly helps students work on collaborative teamwork. “The traditional college environment is independent research,” she said, “but that's not how research is done in the real world. This program helps students realize the extreme value of teamwork to produce a stronger product. For example, I noticed Liz was very creative, which helps when dealing with challenges out at sea because things tend not to go according to plan, and Liz could always think outside the box.”

The policy component of the SEA semester required significant problem-solving skills from Olson and her shipmates. Olson learned how to think about marine biodiversity and conservation with an end goal of creating a network of marine protected areas within the sea. “It’s called marine spatial planning,” said Olson, “taking human uses and environmental factors in consideration. It’s especially problematic because there’s no one to enforce it in the high seas.”

The final project of the semester was a collaboratively written management plan for the students to present to the Sargasso Sea Commission.

“It is not an academic exercise,” said Siuda. “They are doing real science that has no right answer, making policy recommendations where none exist, and contributing to solving real world challenges.”

On the last day, Olson and her classmates participated in a symposium where they presented their research to the Sargasso Sea Commission and scientists from different institutions around New England. The culmination of three months of work on land and at sea by 20 students was given to people who had the resources and authority to utilize it.

“We recently heard from our professors who let us know that the Commission has since asked permission to link the 150-page document of our research recommendations on their website,” said Olson. “We’re very proud of our marine management proposal. The last two weeks were what our professors called a precursor to grad school, with self-directed work; teams coming together; 9 to 5 discussions of what to go in the proposal; and how to present it to such an important audience. I couldn’t have done this anywhere else.”

Olson came away from the experience feeling enriched and changed. “It’s the most significant academic experience I‘ve ever had,” she said thoughtfully. “I came out of the program learning all about how important policy making is, and am now shifting my work toward that.”

Although the potential of real world application of Olson’s work has been a powerful motivator for her, the hard work and fresh air of long days at sea were equally unforgettable.

She said they were about three days out of New York City doing homework around 10 p.m., when one of the students on watch ran downstairs and yelled “dolphins!”

Olson said everyone went on deck to see a pod of about a dozen dolphins following the bow of the ship, swimming in swells filled with bioluminescent plankton, remarkably stunning set against the dark sky and sea.

“They looked like they were painting in the water,” said Olson. “They would swim around each other and the wake of the ship, leaving a luminescent trail behind them, making beautiful patterns of light with each other and the boat. We watched for about 45 minutes in the freezing cold. People were crying. Then they swam off.”

Olson paused for a moment, as if still moved from the memory. “That was it for me,” she said. “After it happened, I thought I’ve seen it all and will never again see anything as cool as this.”

In spite of the long hours, staggered sleep schedule, and academic pace of living on a sailboat for five weeks, Olson is already looking forward to returning.

“I definitely want to do it again. Sailing from Puerto Rico to New York City is so incredible an experience, that I hope to volunteer as a deckhand for SEA, or one day be a chief scientist.”

The Sea Education Association (SEA) is an internationally recognized leader in undergraduate ocean education. Since 1971, SEA has equipped students with the tools to become environmentally literate leaders prepared to address the defining issue of the twenty-first century: the human impact on the environment. The fully accredited study abroad program, SEA Semester®, offers an interconnected suite of courses designed to explore a specific ocean-related theme using a cross-disciplinary approach. For more information about the Sea Education Association and the programs it offers, visit www.sea.edu.

More in this category: « Local Middle School Student Honored Among Brightest in World Disappointing ELA and Math State Test Results »
back to top