150 Years of Service: Volunteer Firefighters To Be Honored Saturday 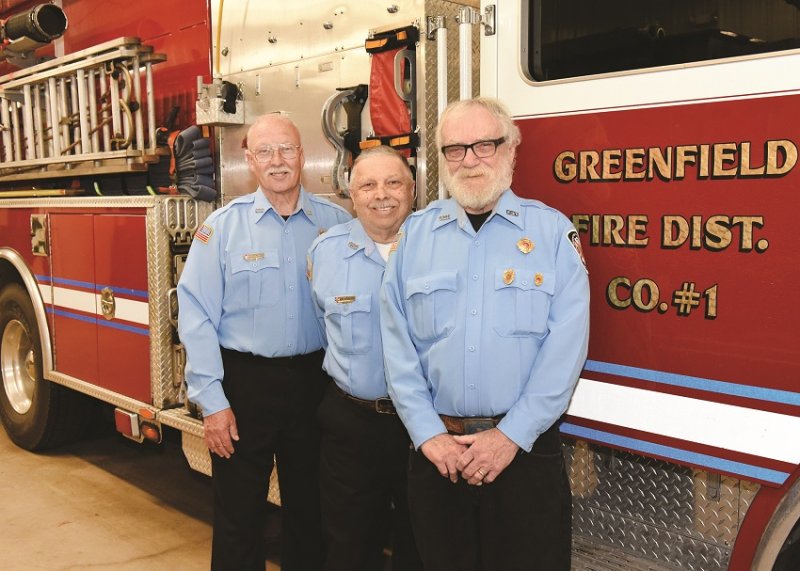 Volunteers for more than 50 years: Gordon McGrath, Robert Roxbury, and Jackie Atwell – posing for a photograph at the Greenfield Fire Station May 7, 2019 - will be recognized by the town of Greenfield for their service on Saturday. Photo by SuperSource Media.

GREENFIELD – They’re always on call, never get paid, and immediately respond to crisis in the community.

Gordon McGrath, Robert Roxbury, and Jackie Atwell have each served as volunteer firefighters for more than a half-century. On Saturday, May 11, alongside young firefighters Jerrid Marshall, and Matthew Petkus, the three men will be recognized by the town of Greenfield for voluntarily serving their community for 50 years.

Gordon "Mickey" McGrath joined the Middle Grove Fire Company when he was 18, following in the footsteps of his grandfather – an original member of the company. To date, McGrath estimates he has answered more than 4,000 calls.

Robert “Bob” Roxbury this year celebrates 51 years as an active firefighter, the past 20 in the role of fire police, where he currently serves as District Captain. Aligned with the Porter Corners Fire Co., Roxbury joined the company as his wife was in the Auxiliary and because, he says: "it's important to support your community.”

Jackie Atwell joined the Greenfield Fire Co., at the age of 21. Atwell’s father was his biggest influence in becoming a firefighter, letting Jackie – since the age of 8- hang out with him at the firehouse.   This year he marks his 51st year with the company.

The town of Greenfield is located approximately five miles north of Saratoga Springs and has a population of approximately 7,400 residents. Geographically, it is the largest town in Saratoga County, covering more than 41,000 acres.

It was a fire in 1946 which proved as main catalyst for the establishment of the Greenfield Fire District.  When a blaze destroyed a home on Maple Avenue - just outside the Saratoga Springs Fire Department district – it was left unattended because the city’s department was prohibited from responding to the fire due to insurance reasons. The towns of Greenfield and Wilton were at the time dependent on “bucket brigades” to battle fires. The Greenfield Fire District was subsequentially formed in 1947 and counts four fire companies:  Greenfield Center, Porter Corners, Middle Grove, and Maple Avenue.

All three men continue to be active in the department, answering the emergency calls for fires, car accidents, medical events and search and rescue missions on both water and land.

A community recognition dinner honoring Atwell, McGrath and Roxbury, as well as volunteer firefighters Jerrid Marshall (7 years of service) and Matthew Petkus (6 years of service) will take place Saturday, May 11 at Brookhaven Golf Course, 333 Alpine Meadows Road, in Porter Corners. Appetizers at 6 p.m., dinner at 7 p.m. and recognition at 8. Tickets are $30 adults, $18 children 5 to 11 years of age; under 5 are free. For more information, contact Diane Czechowicz at 518 587-2410.  The event being staged in memory of local man Don Young.