SARATOGA SPRINGS – The development of a new, multi-story parking structure adjacent to the City Center could begin as early as this summer. The structure would provide spaces for about 600 vehicles and could be fully operational by the summer of 2020.

“As far as design goes, a building permit in June would be great. That’s what we’re pushing towards,” said Ryan McMahon, who joined the staff of the City Center in 2011 as the operations manager before taking over as executive director in 2017.

The development of the parking facility, located on city-owned land between Maple and High Rock avenues, would mark the first use of a multi-phase project that could see the development of the entire 2.6-acre parcel of land extending to Lake Avenue, behind City Hall. Discussions about potential uses regarding the development of that particular stretch of land have been ongoing for several years, and through many different City Hall administrations.

On Thursday, March 21, the Design Review Commission and the Planning Board will stage a joint meeting to hear a presentation from the LA Group regarding details of the Flat Rock Centre Parking Structure. The public meeting will take place 5:30 p.m. at the City Recreation Center, 15 Vanderbilt Ave.

An initial concept plan was publicly unveiled late last year.  “We’ve narrowed down what we’re working on, and it’s in the same mold as the concept drawings the LA Group did for the city,” McMahon said. “While one structure overall, it’s going to have different looks and feels to it, so it will look like multiple structures, multiple types of architecture from the outside. There are sections that are conventional, sections that are more glass, and sections – while it’s not really the right term - of what I call a brownstone look.”

In May 2018, city Mayor Meg Kelly created the Flat Rock Working Group – comprised of area residents, City Center Authority representatives, county leaders, city officials and other community members – who were tasked with developing a Concept Plan for the 2.6-acre parcel. Last November, members of the City Council unanimously agreed to a resolution regarding the Flat Rock Centre Concept Plan.

The design and development of the Greenbelt Trail, Downtown Connector, and a municipal parking structure were identified as a priority to be included in Phase One of the project’s development.

The City Council also recommended the Saratoga Springs City Center Authority proceed with design proposals for the municipal parking structure, albeit with a number of parking spaces reduced from the 754 originally proposed.

The updated plan calls for “600-ish parking spaces,” said McMahon said, with the height of the structure being four to five levels. Currently there is no retail space dedicated, but approximately 70 percent of the structure is “flat” – that is, having level decks, which offers the possibility of an altered usage for the structure should the future usher in the age of autonomous vehicles, coach lobby roundabouts, and VIP rideshares.

“If the time came where there were not as many cars coming to conventions, it could be repurposed,” said McMahon, adding that there are existing communities that have already repurposed former parking garages into shopping areas and condominiums.

The 600 or so new spaces in the parking structure would be designated “paid” parking spots. Motorists’ costs to park have not yet been decided. Eliminated would be more than 200 “free” parking spots on the current paved lot, where the future structure will stand. That paved lot holds 277 spaces in all.

“As of late spring or early summer this year, the city is probably going to be losing a large number of parking spaces because of the construction that’s going to go on for the City Center garage, the Flat Rock lot,” Public Safety Commissioner Peter Martin informed the City Council last week.  Martin said his department will soon suggest changes to the existing time limits of other existing spaces “to accommodate our merchants and to take into account that we’re losing 210 spaces for a period of approximately one year.”

There are currently about 1,300 spaces of public on-street parking and 1,480 public off-street parking spaces in the city, including lots and decks, according to a city-issued request for proposals in 2018.

“Starting doesn’t mean you immediately tear up the whole thing; it could be sectional work,” McMahon said. “There’s never going to be an ideal time, we’re busy year-round now, it’s not just the summer place to be (anymore). We’re working on some alternative parking places with some shuttles.” The duration of construction would take approximately 10 months, he added, while persuing designs for the proposed structure at his office this week. 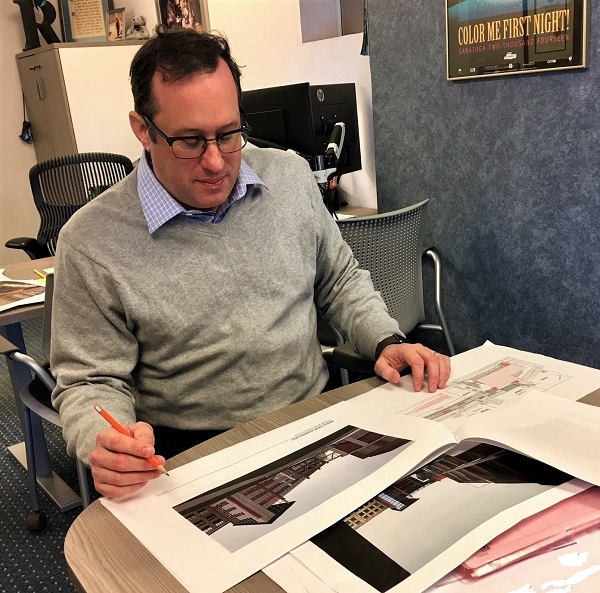 The City Center will be funding the structure, its specified level of ownership not yet decided, although a land-lease arrangement with the city maintaining ownership of the land is a likely scenario. The total cost is likely to be higher than the estimated $11 million price tag of a standalone parking garage the City Center had previously explored.

“The biggest thing about the financing is that this will be something that is built without local taxpayer money going into it. This is not going to be raising anyone’s property tax. And it will be maintained by the City Center – plowing, salting and upkeep,” McMahon said.

The City Center Authority has long stated it needs additional parking for its venue to remain competitive with other regions in drawing visiting tourists for conventions and other events. McMahon said the lack of parking has already cost the center millions of dollars. The hope is that a parking structure could be fully operational by the summer of 2020.

Flat Rock Centre Parking Structure aside, Phase II of the overall project - which stretches to the southern end of the parcel closest to Lake Avenue - will look to increase and reconfigure the public park and green space. City Mayor Kelly said she will seek to reconvene the Flat Rock Working Group in the future to address Phase II of the project, although there is no specific timeline as to when that group will get back together.