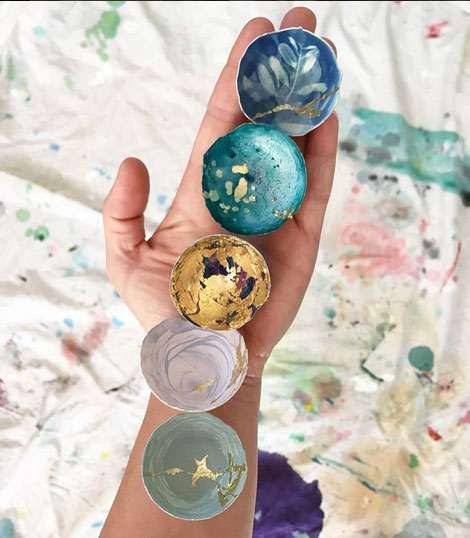 SARATOGA — For the last two-or-so years, Saratoga local Elisa Sheehan has been painting eggshells. She is a painter and has previously managed her own graphic design business. Her art is rooted in wellness and is typically used in hospitals and healing settings.

“I used to get up early in the morning to paint because I had a graphic design business and two kids that we home-schooled so my painting time was often early in the morning. There were just these eggshells lying on our counter waiting for the compost and something struck me about them, they looked like they could be fun to doodle on,” Sheehan said.

“So I just grabbed them. I would just kind of doodle in them, mostly it just started with pen and ink. Over time a bunch of them piled up and I just thought they were so cool,” Sheehan said. She then posted images of the shells to her to Instagram and received a lot of positive feedback.

Her work reminded her of the Japanese art of Kintsugi, the act of repairing pottery with gold and silver. The philosophy behind Kintsugi is embracing something for its flaws and imperfections.

“I was just so taken with that concept, and I really do constantly think about it in my life too as a result of creating these every day. I’m really trying to make it my own practice as well,” she said.

Sheehan uses a variety of techniques to paint the inside of the eggshells: Paint brushes, ink, pen, and acrylic paint because it won’t eat away at the shells.

“I really strive to make each shell really interesting in its own right,” Sheehan said. She says she spends hours on one single shell.

Sheehan’s art, being as unique as it is, gained attention on social media which led to her work being featured on Martha Stewart’s website as a news story.

Since being featured, Sheehan says she has gained more followers on social media and has received requests for custom eggshells.

To learn more about Sheehan or purchase her art visit elisasheehan.com