EVE SPOKE with her daughter, Katie, just a few hours before she overdosed on heroin. She had been clean for awhile and was doing pretty well. “I’m just glad that the last thing I said to my daughter before she died was, ‘I love you.’ Otherwise, I would have killed myself.”

Ken and Maureen’s only child, Dan, had been struggling to get off opioids and heroin for a few months and seemed to be holding his own. About seven months before he died, he had finally admitted to himself and his parents that he was in serious trouble. He tried to get into a rehab facility in New York, Vermont, anywhere. There just weren’t any available spaces. When Dan relapsed and overdosed, he was at home, where his parents found him. “The thought of him dying on the street, totally alone would be completely devastating to us. Living with that would’ve been worse than what we already have had to live with.”

Kellie is a divorced mother of two daughters and a son, all young adults. One daughter is sober after years of substance abuse disorder and she is doing well. The eldest daughter is working on a master’s degree in criminal justice. And the third, her son, is living on the streets in California, addicted to alcohol and crack cocaine. She had no choice but to finally make him leave. He was becoming abusive and she knew there was nothing else she could really do for him. She also had to worry about herself and her own well-being. “Just imagine putting a chain around your waist and hooking it to the car your kids are driving—it’s insane and people don’t understand. But it’s true. It’s very hard to separate yourself from motherhood.”

“I had to distance myself.” But Kellie feels like the “tough love” is on herself and not on her son.

Using “tough love” as a way of getting an addict to change his or her behavior or seek help has been, until recently, a generally accepted model. Countless parents tell stories of being told repeatedly by well-meaning and caring friends and family members to kick their child out. Let them see what it’s really like to be on the street; to be truly alone, without a life preserver, with no other options than summoning up that seemingly buried reserve of will power and resolve that would ultimately offer salvation.

Like most parents, turning from a child can be next to impossible. Maureen and Ken understand the hard choices. “As parents, it’s our job to protect our children and to never give up.”

Tough love goes counter to our nature, our natural protective instincts as parents. Eve agrees, and she adds that, like Maureen and Ken, she “detached with love” not from her daughter, but from the addiction.

All the parents in this article said that they never gave money, or rides to meet friends who they knew were selling drugs. They had rules for their children, which they tried to enforce as best they could. But they couldn’t turn their backs entirely. They held onto hope. And they continued to try to instill that hope in their sick children.

“You don’t want them to lose all hope—I let Katie know that I had hope for her always. “I’ll never regret not turning from her the night she died,” says Eve.

Brian Farr is an assistant professor at Hudson Valley Community College, in the Human Services and Chemical Dependency Counseling Department. He serves as president of the Prevention Council of Saratoga County and is a substance abuse counselor with SPARC. He is also in his 22nd year of being drug- and alcohol-free. He would like to see the media stop using the word “addict” and call it what it is referred to in DSM 5, Diagnostic and Statistical Manual of Mental Disorders: “substance abuse disorder.”

In a recent panel discussion moderated by Farr at the Maple Avenue Middle School, he cited some sobering statistics: Heroin-related deaths have tripled in the United States since 2010; 78 people will die from an opioid or heroin overdose each day; one in 14 New Yorkers will report substance dependence or abuse disorder this year; the epidemic is killing people at the same rate as the AIDs epidemic in the 1980’s and early 1990’s.

And yet, Farr said that addiction—or substance abuse disorder—is the only disease that people get into trouble for having.

Dr. Joshua Zamer, MD, DABAM, Medical Director of Addiction Medicine at Saratoga Community Health Center, agrees. He explains how the pleasure receptors in the brain’s limbic system respond to stimuli. The limbic system is the brain’s “reward system" and is responsible for human motivation and our survival as a species. “It makes very basic things—like food, water, sex—rewarding."

He goes on to explain that, if we eat chocolate cake it feels good and it causes a “hit” of dopamine in the brain. “Drugs and alcohol will raise the level of dopamine 1,000 times more than the piece of cake,” something Dr. Zamer says the brain was not designed for. “It’s a massive overload on the system.”

In substance abuse, as the brain is regularly assaulted by these overloads, it develops a tolerance until it “craves” the substance and needs it to survive. Zamer refers to the cycle of increasing dependence and addiction as the “hijacked brain.”

Once the brain has become addicted to a substance like alcohol or heroin, rational thought, sound judgment and ethical decision-making recedes and the addicted brain will do anything to get that hit of dopamine it now needs to function and survive; anything, including stealing, lying, even resorting to violence.

Zamer calls the challenge of overcoming substance abuse disorder a matter of changing what goes on in the “deep brain,” that part of the mind that is now in control. At the Saratoga Community Health Center, Zamer and a substance abuse counselor work with patients on an outpatient basis to help wean users off drugs and re-establish healthy patterns of behavior. For that, Zamer believes the patient must remain free of all substances—not just the “drug of choice.”

However, similar to the parents, spouses and loved ones who struggle between tough love and enabling, Zamer knows only too well the tough choices that sometimes need to be made. While the classic addiction programs tend to be very rigid and will usually kick someone out for failing a urine test, Zamer says that they grapple daily between giving the patient another chance versus becoming “enablers.”

“It’s the same issues these families must deal with. If the addict in your house continues to use, steal, lie, it gets tricky. Some say that you have to get them out of the house. But it’s tough. If it was my kid, could I cut them off like that? The other thing is that sometimes people need to hit rock bottom in order to see the light. Remember that, with addiction, you don’t care. Your brain has been hijacked and you have tunnel vision. But when people do get some insight and realize they want to change, they can be helped. But the tough thing is, is that rock bottom going to kill them?”

There just are no easy answers. For Kellie, while she is so happy that her daughter is doing okay and staying on the right path, she also says that she tries to continue to hold out hope for her son. But she admits that she has planned his funeral in her mind more times than she cares to count.

For Ken and Maureen, they now speak for a son who no longer can. The couple has become very active in the regional treatment and counseling movement and they try to get their story out to young people and their parents. “If we can reach just one or two people, that is what we can do to keep Dan with us,” says Maureen. Ken recalls the valiant effort that Dan made, first to get into a treatment program and, when the system failed him, to try on his own. He remembers the good times he spent with his son during that time. If they had forced him onto the street, they would not have those memories to cherish.

For Eve, there were times when she had to tell Katie to get away, but it was never for long and the “real Katie always came back and said, ‘I’m sorry.’”

“I wasn’t happy with her disease,” she adds, “but I would never stop loving her. And they need to know that they are loved despite everything.” 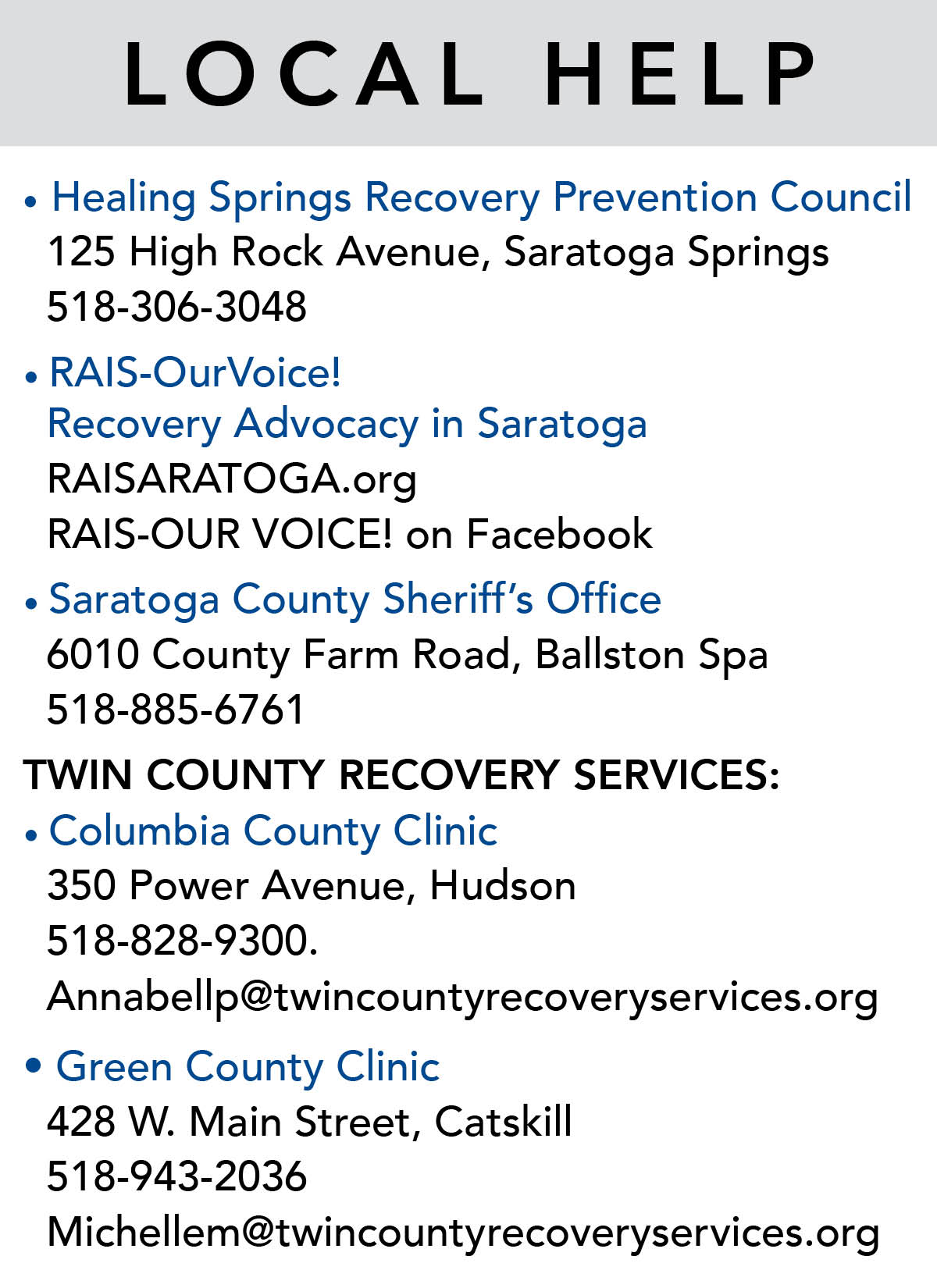