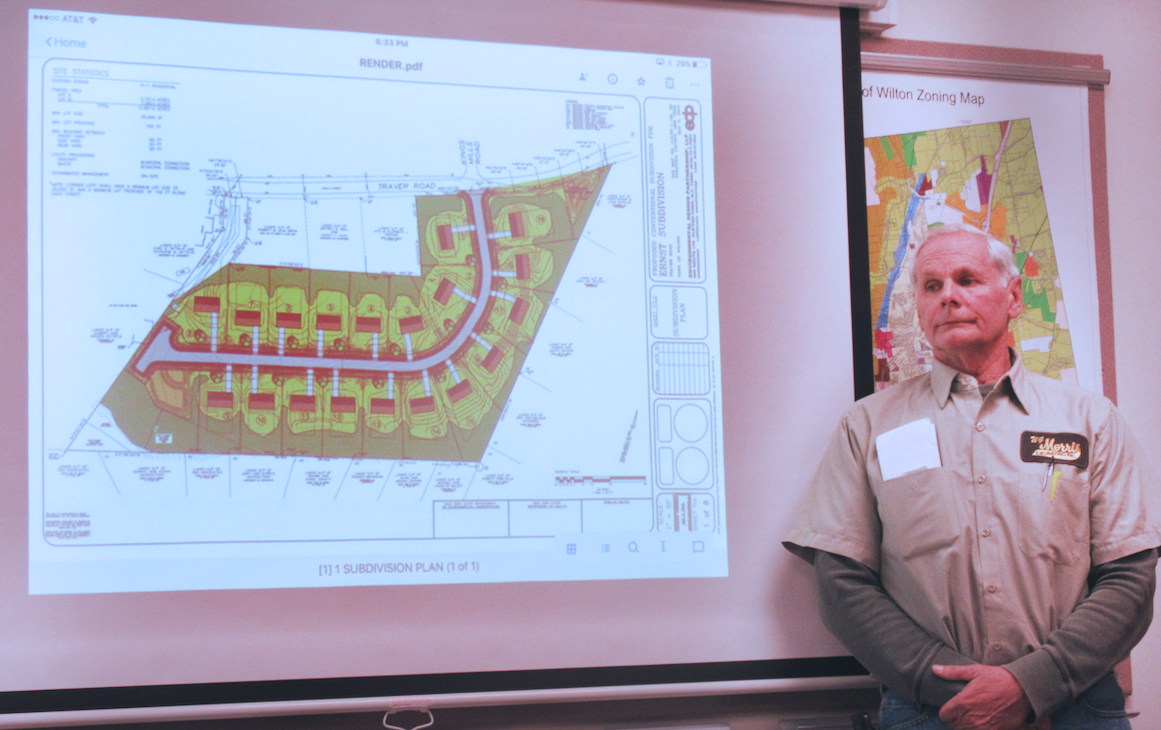 WILTON – After comments from local residents prompted some cordial debate on a wintry Wednesday night, the Wilton Planning Board voted unanimously in favor of two construction projects not far from Town Hall on Traver Road.

Bill Morris of William and Judy Morris Excavating appeared before the board to discuss the project, on behalf of Malta-based McPadden Builders.

Morris said he expects construction to start later this year.

Planning Board Chairman Michael Dobis, as required by law, invited comments from local residents during the public comment period.

Yet Dobis went further in allowing multiple instances of open discussion between the residents, Morris and fellow board members.

Traver Road resident Jean Brew questioned the effects of another construction project on “the traffic flow in Wilton.”

Wilton Director of Engineering and Planning Ryan Riper indicated to Brew that all developers are required by law to pay “traffic mitigation” fees, and that a “professional consultant” is involved in local traffic studies.

Arleen and Gilbert Petteys said they live directly across from what would be the end of the development.

The Petteys requested that Morris consider putting up a fence to block the view, which he said did not seem prudent considering the need for plow access in winter months. Morris offered to plant white pine trees, but the couple rejected that idea.

Dobis interjected that white pines are favored most when they are “getting burned.”

Morris offered to meet at a later time with the Petteys to discuss other options.

Eric Rosenberg, who lost an election in November for the position of Wilton town justice, requested that planning board members consider his “bigger infrastructure” concerns and the “total impact” of all local development projects, among other matters.

“People are concerned that there isn’t the proper dialogue going back-and-forth about the schools,” Rosenberg said.

Planning board member William Rice, who repeatedly opined that governing boards should not hamper development, responded to Rosenberg that “the general trend” in the Dorothy Nolan Elementary School is “declining” enrollment.

“It’s tough having increased traffic, but think about the opposite,” Rice added later, noting how property values appear to be decreasing as residents move away from other rural areas of New York, where development is lacking.

Attorney Mark Schachner, who represents both the planning and town boards, guided members through part of the state Environmental Quality Review process before the unanimous vote to approve the Craw Farm South subdivision.

Some final reviews by Riper and county officials are necessary before construction can commence.

There was nearly an hour of discussion relating to the Ballard Road Self-Storage proposal, which was presented by Joe Dannible of Clifton Park-based Environmental Design Partnership.

Dannible said the 9-acre project will be “strictly for a self-storage facility” with fully enclosed units. There will be no storage of vehicles or RVs, he said.

Rosenberg again questioned the planning board about various aspects of the proposal.

Town officials previously approved the Ballard Road storage project. But much of the discussion this week revolved around complicated changes that were made in relation to grandfathering such approvals.

“We don’t treat anybody else like this, and I don’t think we should start now,” insisted planning board member Brett Hebner. “We want to be consistent in the way we treat applicants.”

“Our intention is to move forward as quickly as we can,” said Saratoga Springs attorney Matthew Chauvin under questioning from the board. Chauvin appeared with Dannible on behalf of the Ballard Road project.

The planning board unanimously approved the special use permit for the Ballard Road facility, but the process is not yet complete. A final site plan still must be presented and approved.