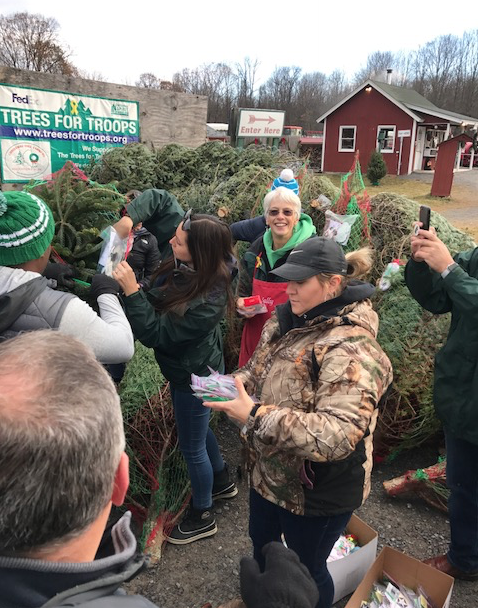 In photos: Sally Ellms (in red apron) enjoys taking part in the process; and Christmas trees being loaded at Ellms Family Farm. Photos by Chip Ellms.

CHARLTON – It is an annual holiday ritual that Chip Ellms has grown accustomed to: dozens of people descending on his family’s property to fill a FedEx trailer full of Christmas trees, which are then shipped to those serving in the military.

“We really have a lot of help,” Ellms said this week, more or less recovered from the flurry of activity on Monday at his Charlton Road farm.

As part of a national Trees for Troops program organized by the FedEx Corp. and the Christmas SPIRIT Foundation, more than 150 trees—donated by the Ellms family as well as other local farmers and businesses—were tied up and stacked for delivery to Fort Bragg in North Carolina.

“It brings people a little bit of home,” Ellms said.

For 27 years, Ellms has been selling Christmas trees grown on his family’s roughly 220 acres of property. It was in the early 2000s, he remembered, that a group of New York farmers decided they would start lifting the spirits of U.S. troops with tree donations.

Then FedEx signed on to provide key logistical support.

The Christmas SPIRIT Foundation serves as a liaison between tree suppliers and the U.S. Defense Department to determine where the shipments go each year, Ellms said. One farm in Ohio supplies most of the trees that are sent overseas, he added.

Ellms indicated that he and his wife, Sally, were joined in the Nov. 27 loading by their children Garth and Ashley Ellms DiPaola; active-duty personnel from the 109th Airlift Wing at Stratton Air National Guard Base in Glenville; students in the Burnt Hills-Ballston Lake School District; Girl Scouts; and for the first time, he said, Patriot Guard Riders.

In a prepared statement, the FedEx Corp. and Christmas SPIRIT Foundation reported that the Trees for Troops program has been organized for 13 years. This year, a delivery “milestone” of 200,000 trees will be surpassed.

The shipments reach every branch of the military, directly impacting service members scattered across domestic and international bases.

“The Trees For Troops program is about more than just delivering trees—we are delivering a piece of the Christmas spirit to our U.S. military and their families,” said Mike Ducker, president and CEO of FedEx Freight. “To be able to say we’ve helped bring more than 200,000 trees to so many of our heroes is an honor, and it shows our appreciation for the sacrifice these men and women and their families have made for our country.”

More in this category: « Grants to Benefit Saratoga County Women and Girls Notes from City Hall »
back to top