Target Shooters on Notice in Wilton 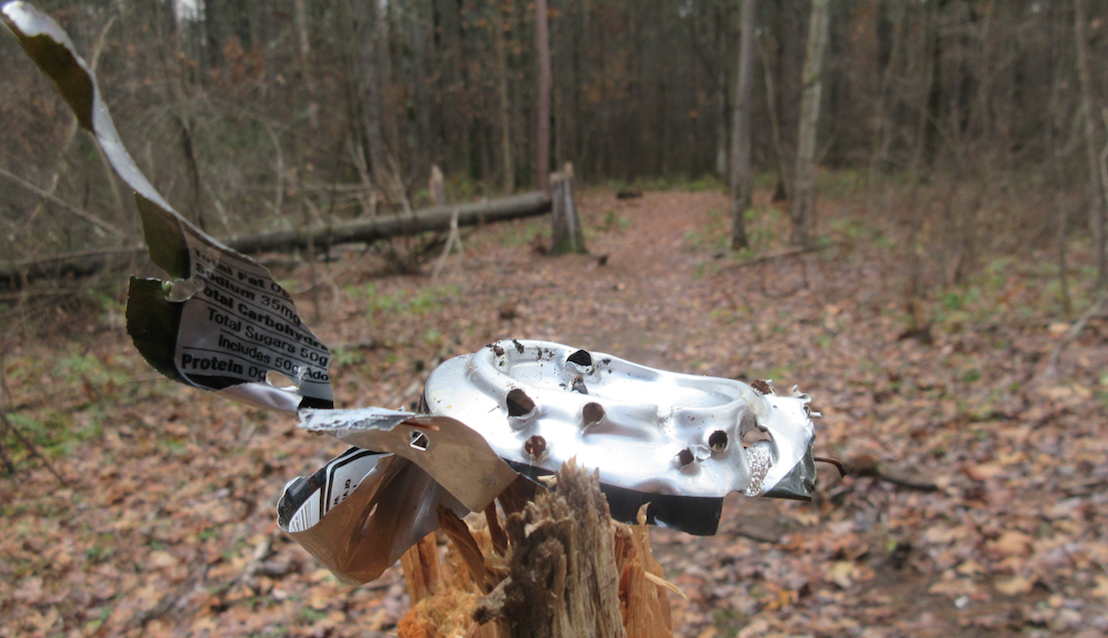 A tin can with bullet holes found in the Louden Road nature preserve in Wilton; and signs posted in the parking area. Photos by Larry Goodwin.

BALLSTON SPA – Apparently, in a wooded area east of the Wilton Mall, what one town resident calls “common sense” does not deter gun enthusiasts from disturbing nearby homeowners by shooting trees and cans at will.

This week, the Saratoga County Board of Supervisors voted to officially ban target shooting in the natural preserve, which occupies 60-plus acres of county-owned land in Wilton.

New signs have been placed to discourage gun owners and the Saratoga County Sheriff’s Department will enforce the ban, effective Jan. 1, 2018.

The woods are popular among local residents for walking trails. But many have voiced complaints to town and county officials about a sharp increase—over several years—in the noises and inherent dangers associated with the daily presence of target shooters.

“The last three years have been hell for everybody,” claimed Carlyle Terrace resident Kyle Fillion, during a Nov. 15 public hearing that focused on the matter at the county complex in Ballston Spa.

According to minutes of that hearing prepared by county Board of Supervisors Clerk Pamela Wright, only seven residents signed up to speak and not one voiced opposition to the target-shooting ban.

The ban does not apply to properly licensed seasonal hunters in the preserve who adhere to New York State hunting laws.

Fillion said county supervisors should be made aware of the “weaponry” being used, lamenting the “trees that have been shot down, cut down, mowed down.”

Kempton Place property owner Bill Morris said he supports the county ban due to the significant amount of development that has occurred near the nature preserve. He also faulted target shooters for routinely leaving bullet shell casings behind.

Ted Van De Ven, a Cedarcrest Drive resident, indicated that he is a strong supporter of the Second Amendment to the U.S. Constitution—the one that prevents federal lawmakers from infringing upon the rights of Americans to purchase and possess guns.

Still, Van De Ven said, he “couldn’t even believe that it was legal” for people to shoot targets on the land north of Louden Road in Wilton.

On the afternoon of Sunday, Nov. 19, a woman walking her little dog in the preserve said she had neither seen nor heard target shooters that day. She explained that they usually become active later in the afternoon. Like Fillion, she also noted how their bullets have felled numerous trees through the years.

“These people that are out there target shooting, they’ve got no regard for anyone but themselves,” offered Alan Kindl, a military veteran and resident of Ingersoll Road, at the Nov. 15 public hearing. “This goes on in the morning and all day long. All we hear is constant shooting and I don’t know if they are too cheap to just go join a range or what.

“It’s gotten to the point now where I’m not a big advocate of legislating common sense, but I think that’s what we have here,” Kindl concluded.