Future Houses on the Hill Under Scrutiny 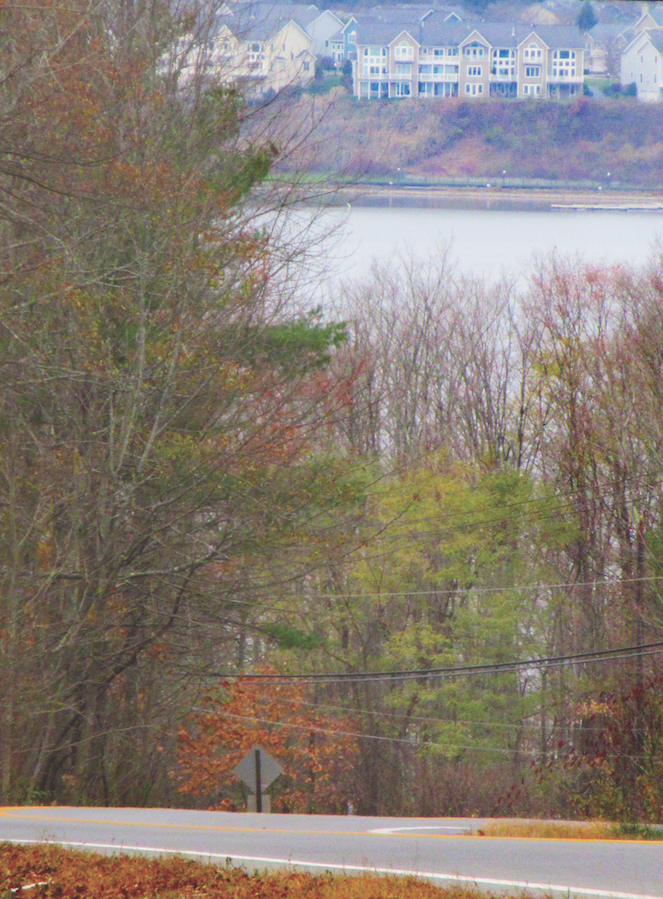 A view down Cedar Bluff Road in Saratoga; and the Saratoga Planning Board after its Nov. 13, 2017 workshop. Photos by Larry Goodwin.

SCHUYLERVILLE – Saratoga town officials and a large group of area homeowners are focusing intently on a proposed 100-acre housing subdivision that would offer premium views of Saratoga Lake.

For two years, the proposal to build 32 homes on either side of Cedar Bluff Road has been promoted by the Saratoga Springs developer Witt Construction.

The plan involves three separate parcels of land not far from the lake, according to Libby Coreno, an attorney from the Saratoga Springs firm Carter, Conboy, Case, Blackmore, Maloney and Laird. Coreno represents Witt Construction in the town’s review process.

Cedar Bluff Road connects to Route 9P on the northeastern part of Saratoga Lake. The first mile of the roadway—where Witt Construction would build the homes—is notable for a steep incline, sharp turns and the surrounding dense forest.

On Oct. 25, Coreno arranged a detailed presentation of the project for Town of Saratoga Planning Board members and answered numerous questions. Minutes of that meeting indicate that Witt Construction would adhere to a “no build” line on the western edge of the site, avoiding terrain that slopes down toward Saratoga Lake.

On Monday night, the planning board invited Coreno and her associate to a formal workshop regarding the Witt Construction proposal. In attendance were about 20 town residents, who were allowed to be present at the workshop but not to speak.

The planning board members are adhering to requirements set forth in the state Environmental Quality Review Act (SEQRA) as they prepare to vote on the proposal.

A negative SEQRA determination by the planning board would indicate that environmental impacts from the project do not warrant further study. A positive determination would impose substantial costs on Witt Construction for several months of additional study.

“Those of us who have been closely following this subdivision strongly believe that a positive declaration is required,” wrote Saratoga resident John Cashin, in a Nov. 9 email sent to a long list of other recipients. “The proposed development has so many insufficiently mitigated impacts that a negative declaration would not be in the long-term best interests of the community.”

Among other issues, according to Cashin, the project’s potential impact on Route 9P traffic, storm-water runoff, groundwater and tree removal have not been thoroughly studied.

“Despite all of these open items, the Planning Board is taking this development to a premature SEQR determination stage and may make a decision based on merely oral, unbinding commitments of the developer,” Cashin concluded. “Such a determination places our community at undue risk and should be vigorously opposed.”

At the Nov. 13 workshop, Saratoga Planning Board Chairman Ian Murray guided the other board members in reading through a detailed list of SEQRA questions.

At least two issues that Cashin mentioned in his email (storm runoff and digging wells for water to supply the new homes) were repeatedly discussed by the board, and acknowledged as sticking points.

“We’re taking a hard look at it,” Murray said. He added that the “clock will start” when the planning board votes on either a negative or positive SEQRA determination.

A formal public hearing would be scheduled within 60 days of that vote.

The board did not plan to vote on the Cedar Bluff Road project at its regularly scheduled meeting on Nov. 15, according to Town Clerk Linda McCabe.

Tom Yannios, a homeowner who attended the Monday night meeting, said afterward that his big concerns are the tree removal and the potential for adverse impacts on the water quality of Saratoga Lake.

Coreno responded that her client is well aware of that town code.

“We have to be in conformance,” she said.

More in this category: « Early Start to ‘Toys for Toga’ Charity Drive Big Deals Go Down on Broadway: Saratoga Downtowner Sold; Cantina Restaurant Takes over Lillian’s Location »
back to top