Every Vote Counts: 10 Ballots Split the Difference Between Yes and No in City Charter Referendum

BALLSTON SPA – They descended on the village of Ballston Spa Tuesday – politicians and lawyers and election officials, members of the media and curious onlookers – on an unpredictable morning which gave no hint of the cold winter that will surely come, and no clue about how the prized chips of the day might fall.

All present crowded into a sub-level room at the county complex, Building Number Five. The “solar building,” as employees call it, was constructed atop land deeded to Saratoga County nearly 200 years ago by a New York City merchant named Nicholas Low for the development of a County Clerk’s office, assuring Ballston Spa would stand at the center of county government.

On this day, the 30-or-so people inside the building’s sub-level basement came to witness the opening and counting of approximately 550 absentee ballots. Some carried with them a cautious optimism to re-affirm the seat they’d won on Election Night remained secure, others with an angst-riddled hope that what they had lost might be regained. Most came to witness the counting of votes of the public referendum that could change the only form of governing the city of Saratoga Springs has known in its 102-year history.

The Election Night tally depicted a city divided and a race too close to call. Of the nearly 8,500 ballots cast, the difference was a measly 48 votes. There were 4,202 YES votes cast that urged Charter Change. There were 4,154 NO votes registered in favor of maintaining the status quo. The counting of the absentee ballots, most assumed, would settle the final score.

The current Commission form of governing relies on five elected part-time council members, each of whom are responsible for administering their own department, as well as serving as legislators. The proposed Council-Manager form of governing would see that the council hires a non-partisan, professional city manager to carry out city policies. 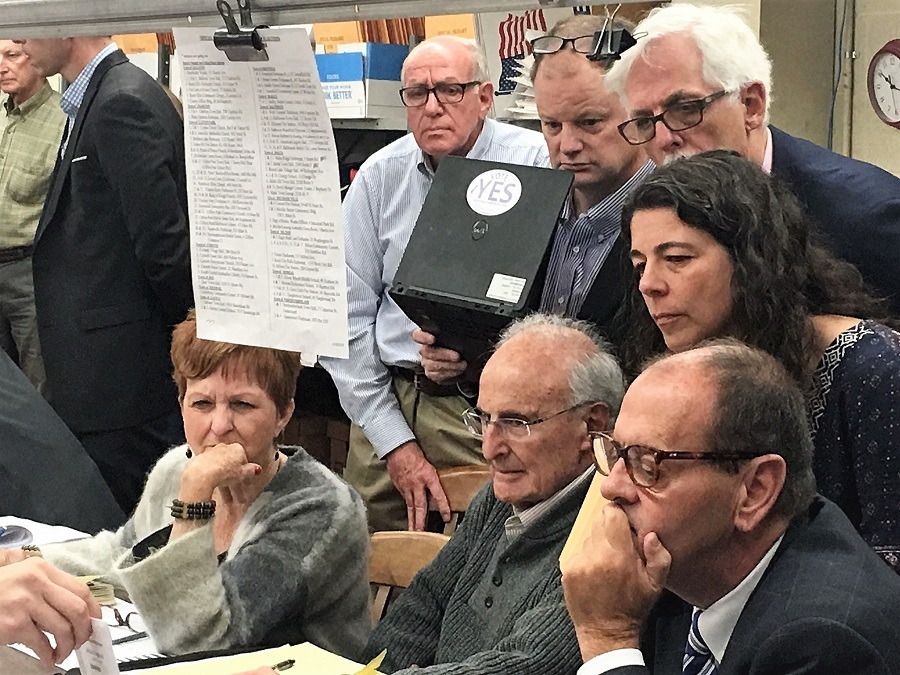 10:16 a.m.: The first handful of ballots are taken from their envelopes and displayed to watchers. Saratoga Springs District Two, Embury Apartments: Yes. No. Yes. No. No. Yes. No. No. Attorneys scrawl stick figures atop their legal pads. The No’s have gained two votes. The overall Yes lead of 48 drops to 46.

2:15 p.m.: City Center voting district: Yes 24, No 18. Yes back up by seven. Deep breaths on all sides.   Over the next half hour, voting districts at United Methodist Church, a second Senior Citizens Center, and the Interlaken Community Center are presented, collectively giving the No count 18 additional votes, and the lead. The room loses its mind. There are some audible noises. Whether these are cries of joy, or cries of pain are difficult to determine. At this point, it’s hard to tell the difference.

3 p.m.: The mailman arrives. An election commissioner is dispatched to meet the mail carrier to learn if any last-minute absentee ballots have arrived on this, the deadline day. Inside the room, the counting continues of ballots from the city’s two final districts. And then it is over. The No votes have it, by seven.

But, wait, suddenly five more ballots are presented. These were set aside during the course of the day’s counting, one of the election officials explains. 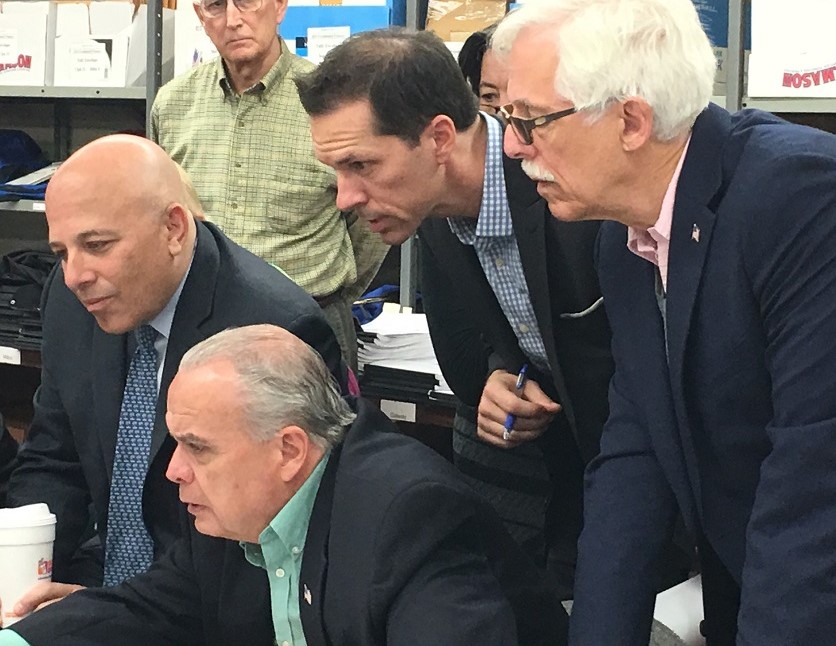 “It ain’t over til it’s over, and it ain’t over yet,” says Richard Sellers, a spokesman for SUCCESS, a citizen organization that supports maintaining the current form of governing.  “It feels a lot better to be up by seven than down by 48, or whatever it was a week ago (but) “I’ll celebrate when they tell me it’s over.”

“It’s a squeaker,” says Charter Review Commissioner Treasurer Gordon Boyd. The commission, which officially disbanded when the polls closed Election Night, conducted 16 months of study, staged dozens of public meetings and voted to pursue the possibility of Charter Change and adopt a council-manager form of governing. A decade ago, Boyd was a member of the SUCCESS group. This time he is part of the pro-change group. In the exploration of Charter alternatives, some residents have changed their minds over time and party lines crossed, making it all the more difficult to gauge which way the majority will go.

Adding to the unpredictability, the members of the City Council have also taken sides - this despite the words of state Board of Elections attorney Brian Quail, who said advocacy by a municipality on a referendum question is unlawful, and that a municipality hiring counsel to participate in a canvas conducted by the Board of Elections is, in his 16 years of experience, unprecedented.

Twenty-four hours earlier, City Council members John Franck, Michele Madigan and Anthony “Skip” Scirocco – each of whom have spoken in favor of maintaining the current form of governing, approved by a 3-0 vote the hiring of a Glens Falls attorney and an associate attorney at the combined rate of $525 per hour to observe Tuesday's event and “defend the city’s right to have all proper absentee ballots counted.” The two council members who have spoken in favor of changing the form of governing, Mayor Joanne Yepsen and Commissioner Chris Mathiesen, did not attend Monday’s “Special” City Council meeting.  John Aspland, the main attorney hired to observe the absentee ballot count does just that, occasionally inking notes on a legal pad throughout the day. 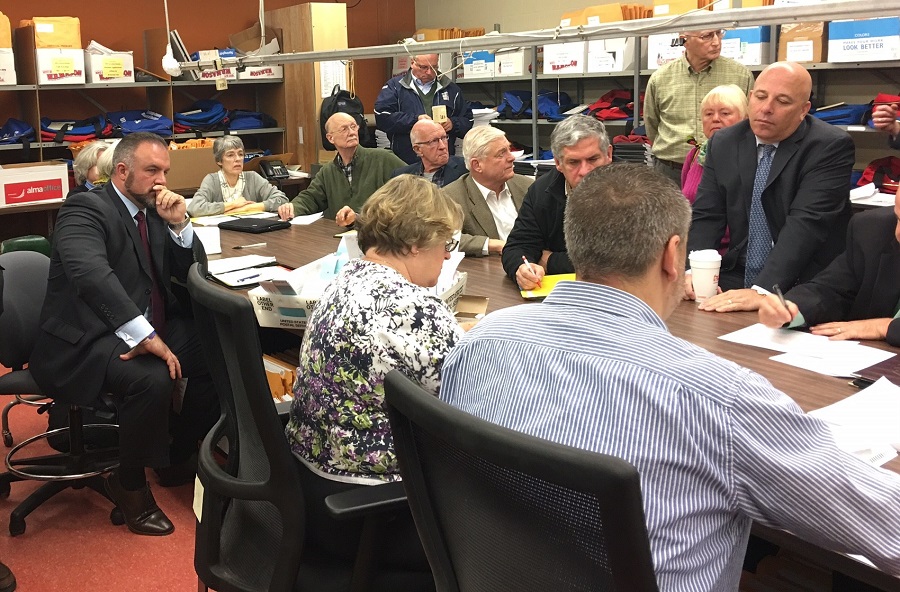 Those last five ballots, the “set-asides,”are presented. Two are ruled invalid. The other three are held up, one at a time: No, no, and…no.

“The absentee ballots came in strong just as they did in 2012 when the Commission form of government beat down a challenge,” Sellers says.

The 2012 vote which proposed amending the Charter and replacing the Commission form of government with a Manager-Council form resulted in 6,738 - 4,872 No victory, a 58-42 percent difference. A referendum in 2006 proposing a change to a strong-mayor form of government was voted down 5865-3615, roughly a 62-38 difference. Counting this year’s referendum, the margin of differences have grown smaller with each successive vote.

“I don’t think the issue of the form of government in Saratoga Springs is going to go away any time soon,” a disappointed Boyd says.  “But I think we have a lot to be proud of, a lot to build on. This was a people’s campaign. We had the forces of both political party leaderships and the government of Saratoga (springs) mobilized against this proposal and we fought them pretty much to a draw.”

Eighteen Military Ballots were requested, as of this week, none have been returned. They must be received by the Board of Elections by Monday, Nov. 20 to be counted, and indications are any which do arrive will be counted Tuesday, Nov. 21.

Boyd was asked whether the referendum vote could be headed for the courtroom. “I don’t know. I just don’t know,” he responds. “We want to be sure that every valid vote has been counted.”

Bob Turner, who served as chairman of the Saratoga Springs City Charter Review Commission, said there are currently conversations being had regarding “overvotes,” which occurs when one votes for more than the maximum number of selections allowed in a contest. Turner said he doesn’t know the specific number of overvotes that appeared on voter’s ballots, but the incident could occur when voters hand write-in candidates on the front of the ballot and inked traces appear as multiple markings appear on the ballot’s reverse side, which is where Charter Change proposition question was printed.

“We’re exploring the processes. That could lead to a hand count of all 8,000-something ballots,” Turner said. That decision whether to pursue the matter could come early next week. The ballot numbers remain unofficial until they are certified by the Board of Elections. That process is anticipated to take at least a few weeks.

More in this category: « Meg Kelly Elected Mayor; Democrats Win Four of Five Contested City Seats Leaders See Too Many Speeders in Wilton »
back to top