Mission 443 Provides YMCA Memberships to Those in Need 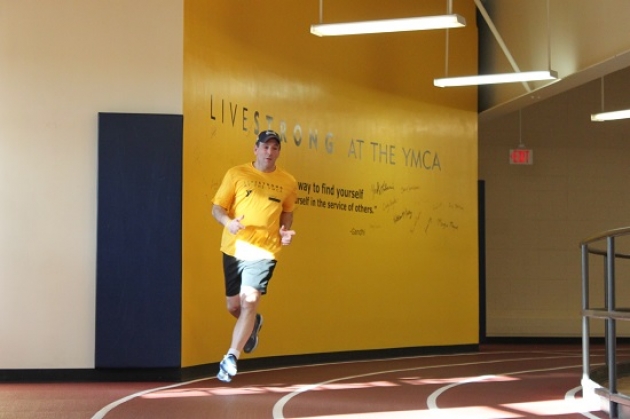 SARATOGA SPRINGS – The Saratoga Regional YMCA (SRY) has a goal: to make sure that everyone who wants to go to the Y is able to. Through their Annual Scholarship Campaign program, SRY has provided countless memberships over the years to those who otherwise wouldn’t be able to afford it. This year, the Scholarship Campaign is called Mission 443, and represents the goal of the 443 memberships SRYMCA hopes to provide in 2016.

Mark Ventra has been going to the YMCA Saratoga Springs Branch for over five years, sometimes going five days a week. As a traveling salesman, the Y staff was sometimes the only people he would see on a regular basis besides his family, and he loved how welcoming and caring they all were. However, if it wasn’t for the Y’s Scholarship Campaign last year, Ventra would have had to stop going.

“A year ago, I was diagnosed with a form of leukemia. At the same time, my job was going through financial difficulties and couldn’t afford to pay me any longer, so I was let go,” explained Ventra.

When Ventra approached John Higgins, Director of the Saratoga Springs Branch, and explained to him how he wasn’t going to be able to afford to renew his membership, Higgins simply told him, “We’ll take care of it.”

“I never thought I’d need a scholarship,” said Ventra. “I always thought the scholarships were for people that weren’t as well off as I had been. I used to never give it a second thought about volunteering or giving $100 to the scholarship fund, and now, I couldn’t even pay for my own membership. I wasn’t looking for a handout, but they helped me anyway, no questions asked.”

With the help of the scholarship, Ventra was able to keep doing all the things he loved at the Y, from weight lifting and the track to their aquatic programs and cycling classes.

“For me, the scholarship helped me to stay working out and doing the things I needed in my life more than ever before,” said Ventra. “Not in the literal sense, but a year ago, the YMCA saved my life. If the scholarship fund can help someone that, on the outside, seems to have it all going, it can help anybody. Without a place like this, I honestly don’t know what I would do.”

Higgins also finally convinced Ventra to get involved with the YMCA’s Livestrong Program. Livestrong at the Y seeks to help cancer survivors through physical fitness, wellness initiatives and supportive relationships with Y staff and fellow survivors.  Ventra is now a certified Livestrong instructor.

“I’m always very positive,” remarked Ventra. “I felt it was my mission at that point to help other people that may not be as resilient. I may not be able to change what’s happened, but I can help people move forward with whatever struggle they have.”

Ventra also coaches JV lacrosse at Saratoga Springs High School (SSHS) and is the youth lacrosse instructor at the YMCA.

“I always tell the kids, there are things in life that are going to come your way that you don’t expect. You might lose a job, you might get sick, but it’s how you handle those things that define you.”

YMCA’s Scholarship Campaign also provides assistance to children and teens whose families cannot afford to send them to the Y. The YMCA is a safe, healthy place to go on the weekends and afterschool, and no student should have to miss out on that because of inability to pay.

16-year-old Donald Steves, a student at SSHS, would not be able to go to the YMCA without his scholarship.

“The scholarships are phenomenal. They give people that don’t have the money the chance to come to the Y and have a great time,” said Steves, who is also a volunteer with the YMCA’s afterschool basketball program and Saturday night kid’s club. “There are so many things to take advantage of here and everyone should have access to that.”

Steves even made one of his best friends at the Y, fellow SSHS student Josh Green, who he said is “like a brother” to him.

“The YMCA is special to me because it’s like my second home,” explained Steves. “I’ve learned all my social skills here, my manners. Great skills come from the YMCA.”

For more information about the Saratoga Regional YMCA’s Scholarship Campaign, Mission 443, or to donate, visit srymca.org/scholarships.

More in this category: « Lights, Camera, Kasich! Art Takes Aim at Open Conversation about Firearms »
back to top