100 Years of Marching: History of Saratoga’s Drum and Bugle Corp 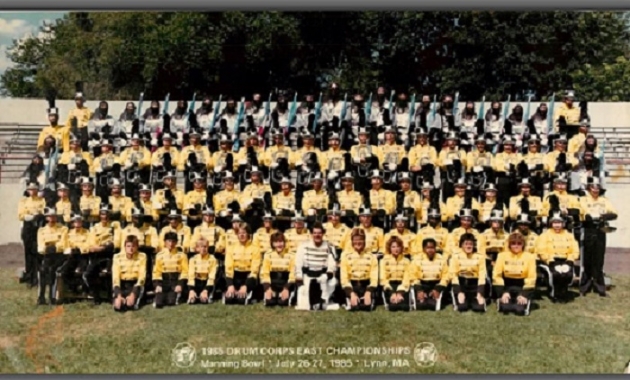 The H. Dutcher Community Room in the library was jam packed with former members of Drum and Bugle Corps throughout the area, as well as interested community members. After the hour long presentation, the series lasted another hour as audience members were eager to share their stories about their own experiences in Drum and Bugle Corps over the years. The atmosphere of camaraderie and nostalgia in the room made this presentation both interactive and touching to listen to.

Jeff Perkins, who gave the presentation, joined Drum and Bugle Corps in 1953, when he was just 11 years old. It was originally called the Junior Saratoga Cadet Corp, but in 1954 changed its name to Saratoga Ambassadors. Since then, Perkins has been a part of many Drum and Bugle Corps, including Vagabonds in Fort Edward, the Gloversville Fusiliers, and the Interstatesmen from Troy.

“[Drum and Bugle Corps] reach kids that go unreached by other things. I was never an athlete, never a football player,” said Perkins. “But you become part of a unit of people that have the same goal, the same leadership and drive. That whole idea caught me and from then, it was all I wanted to do.”

Still passionate about the Corps, Perkins has an interesting story about how he got started with it. “My friend Mike, a real rugged kid, would walk by my house everyday going to rehearsal with his bugle case. One day, he grabbed me by the wrist as I was playing outside and said, ‘I’m not letting go unless you come with me to rehearsal.’ So he took me to the third floor of City Hall where they rehearsed and gave me a horn.”

During one rehearsal, the director, whom the kids called “Ham,” noticed Perkins was constantly talking to one of his friends. After telling him to be quiet a few times, Ham came over and kicked Perkins in the seat of the pants.

“He said, ‘Perkins, you can go home and tell your mother or you can keep your mouth shut and march.’ From then on, I was really into it,” said Perkins, “Ham was in World War II. They expected it done, no excuses. It was a semi-military experience. I learned a work ethic I carried with me for the rest of my life. I brought that same work ethic to my own drum corps.”

Perkins took over his own Corps, Avant Garde, from 1975 until 1985. In that time, they traveled all over the country touring, winning six state championships in a row. In 1984, Saratoga’s Avant Garde was the 15th Drum and Bugle Corp in the world.

Though Avant Garde ended in 1985, members from the original group came together over the last several years to form Avant Garde Alumni Drumline. They are continuing the tradition of representing Saratoga Springs at events throughout the area.

Avant Garde recently celebrated their 40th anniversary with a party at Vapor on November 7.

For more information about Avant Garde Alumni Drumline, visit their website at avantgardedrumline.org.

More in this category: « Will Less Be Moore? 400+ Jobs: Dollar General Eyeing Wilton »
back to top