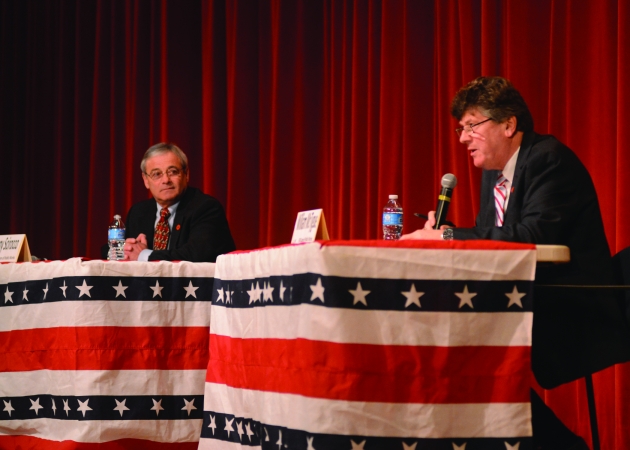 While the candidates articulated policy differences, the proceedings were notable for their civility and lack of rancor. This was due in large part to the firm oversight of the debate by LWV’s Barbara Thomas, who did make both the candidates and audience members adhere to strict time limits. This is notable in contrast to previous year’s candidate forums about city elections.

After a brief introduction of the ground rules by Thomas, unopposed finance commissioner candidate Michele Madigan (D, I, WF) took the podium for a statement about her accomplishments in office and vision for her next term.

This was followed by the candidates for commissioner of public works, in which incumbent Anthony “Skip” Scirocco (R,C) and challenger William J. McTygue (D, I, WF) sat side-by-side.

McTygue took issue with Scirocco’s record, citing in particular a deal to sell water to Wilton without full council approval and called for a total citywide evaluation of water resources, saying that “there is no long range water quality plan”.

Scirocco noted his accomplishments in office citing a “reversal of a generation of infrastructure neglect.”

Interestingly, these were the only candidates of the evening who were asked about Proposition 1—the pending statewide casino proposition. Both were generally in agreement that they were personally opposed to casinos, but noting if it passed the city would have to be ready for changes regardless of whether Saratoga Springs was designated as a casino site or not.

The candidates for commissioner of public safety easily had the most points of policy difference of the evening.

In his opening statement, challenger Richard C. Wirth (R, I, C) characterized the administration of incumbent Christian E. Mathiesen (D, WF) as “too Caroline Street focused while there is an uptick in crime citywide” and an atmosphere of “blame the victim” prevailed. Mathiesen responded vigorously, listing many accomplishments during his administration, both as leader of his department and on initiatives that were citywide in nature.

The candidates differed sharply on their plans for improving the fire/emergency response times on the city’s eastern plateau, as well as the need for an independent review of the recent police incident regarding Darryl Mount, Jr.

The differences between candidates for commissioner were less pronounced. Incumbent John P. Franck (D,I,WF), who is running for his fifth term, cited his “core four” platform as the guiding principles that characterized how he has and would run his office. Challenger John P. Arpei (R, C) did not directly challenge Franck on anything specific, but did say he was an advocate for more civility and cooperation in the conduct of city government.

Indeed, the accounts commissioner candidates agreed totally on two major issues. Both felt that a citywide reassessment was unnecessary and too costly, and that the current assessment level for condominiums (about 30 percent of assessed value) was too low. Franck cited his initiative in going to Saratoga County to try and develop a political coalition to change this formula. Arpei stated that the formula was imposed by downstate interests, where condos are more prevalent and therefore would be very unlikely to change.

More in this category: « City Council—Sender and Receiver Curtain Up For Wilton Bow Tie Cinema »
back to top