A Message in a Name—Thank You Marylou 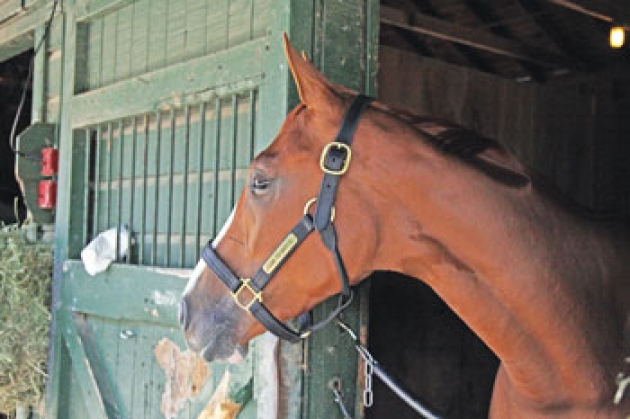 A uniquely named filly, Thank You Marylou, hangs her halter over in Mike Maker’s barn.  She’s owned by Kenneth L. and Sarah K. Ramsey.  This couple sits atop the leader board for 2013 North American purse earnings. Their horses have earned $5,451,370 and we’re only a few weeks over the midway point. Midwest Thoroughbreds follow at a distance of almost $2 million dollars.

The Ramseys are good for the sport. They love the game and participate at every level. They own a big farm in Nicholasville, Kentucky where they stand their outstanding homebred Kitten’s Joy. There’s no one in the sport who enjoys racing any more than Ken Ramsey. There are few others who enjoy so much support for racing endeavors from their entire family. Everyone in the Ramsey family has had at least one horse named for them. Kitten’s Joy was so named because Kitten was Ramsey’s pet name for his wife. He was a champion and so is Sarah Ramsey and so goes the story of Thank You Marylou.

Ramsey waited for the right one. It’s not just a name, it is a message. He was careful to find a filly who could deliver and do it with style. It helped that this particular filly was bred “right,” and when she showed class, consistency and speed in her workouts she was officially named Thank You Marylou.  She’s a Birdstone filly and the first rattle out of the box she ran as if to honor her namesake. She won going away in the Tippett Stakes at Colonial Downs. Alan Garcia guided the queen-like Virginia-bred filly and is expected to take a leg-up when she next runs.

Racing fans everywhere remember Birdstone. He’s a Whitney homebred. In 2004, and in a sea of mud, the Nick Zito-trained colt skipped over the track and right on by the huge crowd favorite Smarty Jones in the Belmont Stakes. The victory stunned the crowd and caused Marylou to apologize for winning. She seemed more disappointed than anyone that our sport was once again denied a Triple Crown winner.  That gesture showed the racing world just how truly sporting this woman is.

Later in the summer, the Ramsey’s found the perfect way to meet Saratoga’s leading couple. They did it with Roses in May. No, not real roses and not on the first Saturday in May. Roses in May won the Whitney Handicap. The seeds of a later blooming friendship were cast when the Ramseys met Marylou Whitney and John Hendrickson in the Director’s Room for a post-race celebration the couple traditionally put on.

Whitney and Hendrickson displayed their sportsmanship in a friendly gesture later in the year. One of their horses finished second to a Ramsey runner and they went out of their way to offer congratulations to the winning team. Their genuineness was not lost on Ramsey. When his wife Sarah suffered a stroke in 2007, Ken Ramsey called John Hendrickson. Marylou had suffered a stroke just a year prior and Ramsey was seeking advice. They did much more than offer advice, they flew Marylou’s doctor from California to tend to Sarah.

“They very well could have saved my wife’s life,” said Ramsey.  “Sarah’s chance of recovery was rated at about 40 percent.”

Eventually she was able to be moved to Cardinal Hill Rehabilitation Center in Lexington, Kentucky.  Hendrickson and Whitney were in town at the time—there for the dedication of the Stroke Recovery Center, named in their honor.

Of course they visited Sarah Ramsey. Generosity and kindness is what seems to please this couple more than anything in the world. It makes your heart bubble to think of all the nice things they do.

Don’t miss Thank You Marylou’s next start. It is expected to be in the Adirondack on August 11. This is a Grade ll, $200,000 dash for 2-year-old fillies at 61/2 furlongs and there are messages all around the name of the race as well as this filly. Ken Ramsey likes to win and boy, oh boy would he ever love to win this one!

Marylou Whitney is expected to present the trophy. The hope is for Sarah Ramsey to travel to Saratoga for the race. What a perfect joy that would be!

Imagine a trend of naming horses to send messages. In a few years we could expect to see names like Save the Dance, Preserve the Adirondacks, Give to the Backstretch Employees, Revive the Floral Fete, Save Racing, Keep Saratoga Special, Support SPAC, Whitney Way, Olympics After All, Tasteful Diva, Simple Elegance, Philanthropist Extraordinaire, A Life Well Led and On and On. And that’s just to name a few of the thank you’s New Yorkers owe Marylou Whitney. If we begin to add what’s she’s done in other states we’d create an impossibly long but deeply meaningful record.