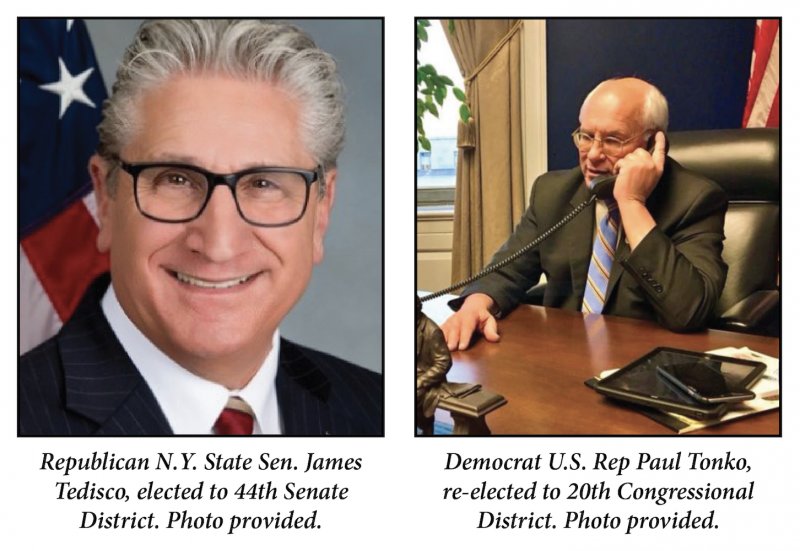 SARATOGA SPRINGS — Despite a changing electorate, an increase in population, and a redrawing of district boundaries, Saratoga voters this week elected to largely maintain the present state of affairs when choosing their political leaders.

Congressman Paul Tonko, Assemblypersons Mary Beth Walsh and Carrie Woerner, and county district attorney Karen Heggen were each reelected to new terms, and when it came to selecting a state senator for the new all-encompassing county district, it was the familiar name of James Tedisco which Saratoga voters chose.

There were, however, major diversions in some key races among Saratoga County voters when compared to the selections of the majority in the rest of the state.

There are approximately 173,500 registered voters in Saratoga County, according to the NYS Board of Elections most recent report of Nov. 1.  Approximately 36% are registered Republicans, 29.6% registered Democrats, 27.2% are independent of any party, and the remaining 7.2% are comprised of registered third-party voters.

More than 120,000 votes were counted, nearly 100,000 of them from Saratoga County in the newly redrawn 44th Senate District, which includes all of Saratoga County and part of Schenectady.

Ostrelich joined other party members Tuesday evening at The Inn at Saratoga on Broadway, where Democrats had gathered. Post-election, Ostrelich said she will continue to serve in her current capacity as a Schenectady County Legislator.

Tedisco meanwhile joined fellow county Republicans on Election Night at Vapor. The club is flanked by a this-century-constructed gambling facility with video lottery terminals and more than 1,000 slots, and a near century old harness racing track where sulky drivers are pulled across the half-mile dirt oval by horses eleven months of the year.

Tedisco was first elected to represent the 49th State Senate District – which includes parts of Saratoga, in 2016, and previously served in the New York State Assembly from 1983-2016.  Tedisco, who represented the 49th district, decided to run in District 44 after the state’s redistricting process took shape earlier this year. The move drew criticism from Sen. Daphne Jordan of the 43rd district, who contended she had the rightful geographic claim to the new district, according to WAMC. Jordan subsequently announced she would not actively run.

Once every decade, geographic boundaries regarding candidate representation are redrawn. Earlier this year, congressional redistricting placed all of Saratoga County into District 20, alongside Albany and Schenectady counties, and parts of Rensselaer.

In CD 20, Democrat incumbent Paul Tonko beat Republican challenger Elizabeth Joy 54% to 45%, with a victorious district-wide margin of approximately 27,000 votes. It is a contest the two candidates had staged previously; in 2020, Tonko defeated Joy by a near 20-point margin of victory.

Tonko was victorious among voters in Albany, Schenectady and Rensselaer. Saratoga voters favored Joy 53% to 47%, a difference of just over 6,000 votes. Republican incumbent Congresswoman Elise Stefanik had represented a portion of Saratoga in previous elections. The newly redrawn Congressional District 21 covers areas east, west and north of CD 20 where Stefanik defeated Democrat challenger Matt Castelli by a near 20-point margin of victory.

For the first time in several decades, Democrats challenged the district attorney seat long held by Republicans. County voters re-elected Republican incumbent Karen Heggen over Democratic challenger Michael Phillips 57% to 43%, with a margin of victory of about 14,000 votes.

Ballot Proposal 1 – Clean Water, Clean Air and Green Jobs Environmental Bond Act of 2022, was overwhelmingly approved statewide and by Saratoga voters alike.  The “yes” vote authorizes the sale of state bonds up to $4.2 billion to fund environmental protection, natural restoration, resiliency, and clean energy projects, in addressing and combating the impact of climate change and damage to the environment.