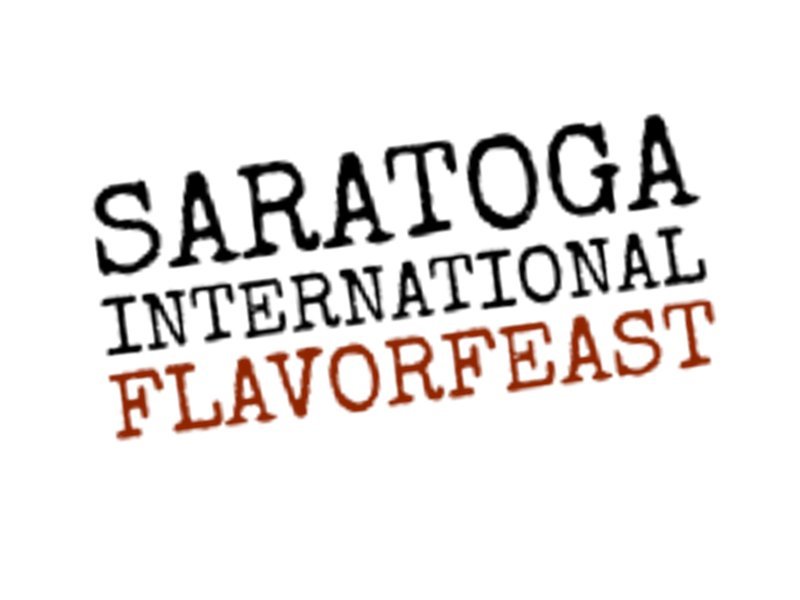 The Saratoga International Flavorfeast is presented by Saratoga Food Fanatic and Network Saratoga LLC and supported by Saratoga Eagle Sales and Service and Stella Artois, the Adirondack Trust Company, Social Radiant, Saratoga Saddlery, Saratoga Springs FiberCity, Saratoga County Chamber of Commerce, Discover Saratoga, Celtic Treasures, Cooperstown Distillery, The Spa City Motor Lodge, Fingerpaint Marketing, Le Creuset Log Jam Outlet Center, Saratoga Today and Saratoga’s Star Radio 93.3FM. "Our inspiration for creating this event was to showcase the variety of restaurants we enjoy in this region and to highlight the tremendous skills of our local chefs," said Ashley Dingeman, Saratoga Food Fanatic Blogger/Writer and co-organizer of the event. "Fall is a beautiful time of year to walk the streets of Saratoga, and sample incredible tastes from local restaurants representing countries from all around the world."

Beginning at 11am on October 8th, Flavorfeast “passport-maps” displaying a map of participating restaurants/businesses can be picked up in front of Fingerpaint Marketing on the corner of Broadway and Division Street. The map will also be available on the www.saratogaflavorfeast.com website to print the night before. This map will help event-goers plan their day’s itinerary of travel to a variety of local restaurant destinations for $1 (as well as some $2) food samples from countries of origin such as Ireland, Italy, India, Guatemala, Spain, Mexico and more. A current list of participating restaurants includes Ben & Jerry’s, Boca Bistro, Cantina, Cardona’s Market Saratoga, Gaffney’s, Henry St. Taproom, KaffeeHouse, Kaleidoscope Café, Karavalli, Maple Valley Farm, Sushi Thai Garden, The District at 43 Phila, The Parting Glass, Trattoria Fortunata, and West Avenue Chicken. Saratoga Olive Oil Company will be offering free tastings throughout the day.

Entertainment including Asian dance, Irish Step Dancing, fiddling, German accordion playing, African drumming and more will take place at various locations downtown including The Spa City Motor Lodge Parking Lot, Parting Glass Lot, Adirondack Trust Drive Thru as well roaming locations throughout the city streets. See www.saratogaflavorfeast.com for the full entertainment schedule. When you pick up your “passport map,” at the corner of Division and Broadway, you can enter to win prizes donated by Saratoga Eagle Sales and Distributing and Le Creuset Log Jam Outlet Center. Proceeds will go directly to the Food Pantry at the Franklin Community Center. In addition to food samples at restaurant locations on Broadway, Phila Street, Caroline Street, Lake Avenue and Henry Street, there will be restaurants from outside the center of town set up in The Spa City Motor Lodge Parking Lot, on the corner of Broadway and Division Street.

"We are extremely excited to bring back Flavorfeast, which we’ve enjoyed presenting since 2014," said Fran Dingeman, owner of Network Saratoga and co-organizer of the event. "We see this year as a year of 'rebuilding' the event after a two-year break in continuity. We came back to find restaurants and sponsors in a whole different place than they were in 2019. We are thankful for the tremendous enthusiasm we’ve received from our restaurant participants and for the generous support we've received from the business community. We look forward to presenting the event!"

The Saratoga International Flavorfeast was created to bring greater awareness to the richness of our local diversity while celebrating the worldly culinary styles and people that give this area its unique flair. A full list of participating restaurants, menu items, and entertainment will be posted on www.saratogaflavorfeast.com. For more information, call 518-365-3459.

FOR MORE INFORMATION: This email address is being protected from spambots. You need JavaScript enabled to view it. 518-365-3459

More in this category: « Planning Board Proposes: Apartments, Townhouses, Workforce Housing Candidate Debate for Saratoga County DA to Stage Oct. 11 »
back to top