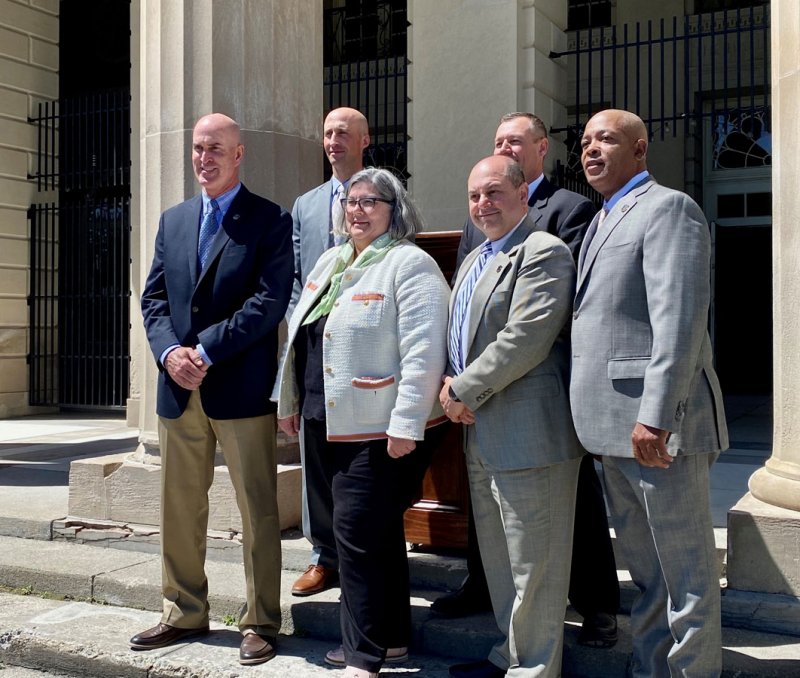 Democrat Assemblywoman Carrie Woerner flanked by members of N.Y. State Park Police from across the state on May 11, 2022 at Saratoga Spa State Park, where a press conference was staged to eliminate the existing “quasi-merger” between Parks Police and State Police, and reinstate Parks Police law enforcement leadership. Photo by Thomas Dimopoulos.

SARATOGA SPRINGS — More than 75 million people visit New York’s 180 state parks, 40 historic sites and numerous beaches every year. Less than 200 officers are charged with protecting those visitors, and in recent years the number of officers representing the N.Y. State Park Police has dwindled at an alarming rate.

“They are truly ambassadors for New York’s parks,” said Assemblywoman Carrie Woerner (D-Round Lake), leading a presser alongside members of N.Y. State Park Police from across the state, at the Hall of Springs this week.  “But in the past few years, terrible things have happened,” said Woerner, citing employee promotions and transfers being frozen, investigative and detective positions eliminated and dispatch services removed altogether from the Saratoga Zone and placed instead with state police.

“We had 266 in July 2019 and we have about 188 today. Our attrition rate is at least four times the national average. What we are seeing is elimination through attrition, but no one has told us we are being phased out,” said Frank McGarity, associate director of the state Park Police Sergeants’ Association for the PBA.

“In December 2019, Gov. Andrew Cuomo issued a memorandum which basically said the N.Y. State Police would have operations control over N.Y. State Park Police,” said McGarity, who has 20 years on the job, 16 of them in Saratoga. “Since the memo where are we? There are no transfers, no promotions, no hirings.”

The last hire was in October 2018, McGarity said and 78 Park Police officers lost in the past three years. The Park Police has had a patrol force since 1885.

Of the 31 women officers who were on staff, 11 left, resulting in about 20 currently on the job and representing just over 10% of the overall force statewide. In March, Gov. Kathy Hochul announced a 30x30 Initiative, setting a goal of ensuring women comprise at least 30% of new recruitment classes in all agencies by 2030.

Part of the reason for the shortage is the disparity in wages – which are less, and retirement benefits, which require five additional years of service before eligibility kicks in – compared to other protection agencies in the state, officials said. Rules limiting pay, promotions and transfers all play a role in the difficulty of recruiting and retaining officers.

“I hate to use that word, but our own agency is ‘defunding’ us,” said Troy Caupain, PBA Secretary & Park Police Officers Director.

The cost of training an officer is $130,000, and the majority of those who have left over the past few years have stayed in law enforcement, making the move to other policing agencies. Local municipal departments across the state are doing much of the employee poaching. For local departments they are getting someone well-trained who doesn’t have to go through a police academy course, and therefore have limited costs associated with doing so. For officers, they are offered better opportunities given the park police restrictions on promotions, transfers and benefits.

This past January, Gov. Kathy Hochul suggested the park police should be separate from state police, but no definitive action has been made since that time.

“I don’t think the average New Yorker understands how devastating this quasi-merger between the parks police and the state police has been on our park police,” Woerner said. “Our Governor has said she thinks it’s time to separate the Parks Police and the State Police. I couldn’t agree more - but now is the time to make that real - before we start our very busy summer season.”