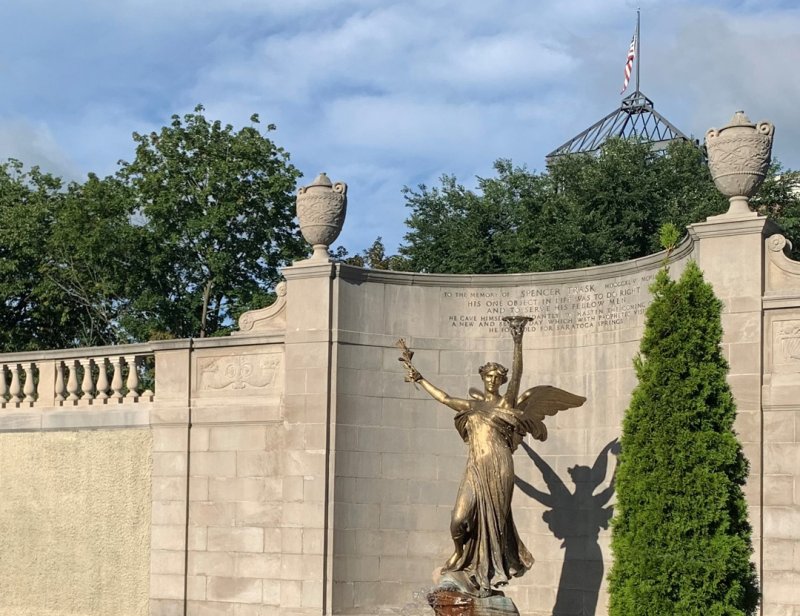 SARATOGA SPRINGS — The City of Saratoga Springs has accepted a donation by the Saratoga Springs Preservation Foundation to make a repair to the architectural surround of the Spirit of Life and Spencer Trask Memorial in Congress Park, a National Historic Landmark.

Congress Park has seen increased use, in part, due to the many restoration projects that the City of Saratoga Springs Department of Public Works has undertaken over the years.  In 2015, the Foundation, in partnership with the City of Saratoga Springs, completed a $750,000 restoration of the Spirit of Life and Spencer Trask Memorial and, most recently, the Katrina Trask Gateway Memorial was restored by the city.

With increased use of the park, however, there can also be an increase in vandalism. In 2019 a baluster of the surround was stolen.  With the City facing economic challenges as a result of COVID, the Saratoga Springs Preservation Foundation will restore the missing baluster in the upcoming months, with the assistance of PCC Contracting, and have two additional balusters replicated should a repair be needed in the future.

This donation was made possible through funding provided by the Adirondack Trust Company Community Fund, which maintains a Donor Advised Fund for the preservation of the Spirit of Life and Spencer Trask Memorial.

In keeping with the spirit of the memorial’s inscription, “His one object in life was to do right and serve his fellow men, he gave himself abundantly to hasten the coming of a new and better day...” this donation ensures that the beauty of the Spirit of Life and Spencer Trask Memorial is maintained. Since the completion of the restoration in 2015, the Saratoga Springs Preservation Foundation has donated lighting, geraniums, and regularly schedules volunteers to assist with maintaining the landscape of the Memorial.  Within the past year, volunteers have donated 250 hours to maintain the landscape.

The Memorial was unveiled and gifted to the City of Saratoga Springs on June 26, 1915 by Katrina Trask and George Foster Peabody to memorialize Spencer Trask who played a critical role in preserving the spring waters of Saratoga. It was designed by sculptor Daniel Chester French and architect Henry Bacon, who were also responsible for the Lincoln Memorial in Washington D.C., as well as Charles Leavitt Jr. who designed the
surrounding landscape.

More in this category: « Under Development: 90 Residential Units, 31 Hotel Room Proposal at DRC Summer Events at Brookside Museum »
back to top