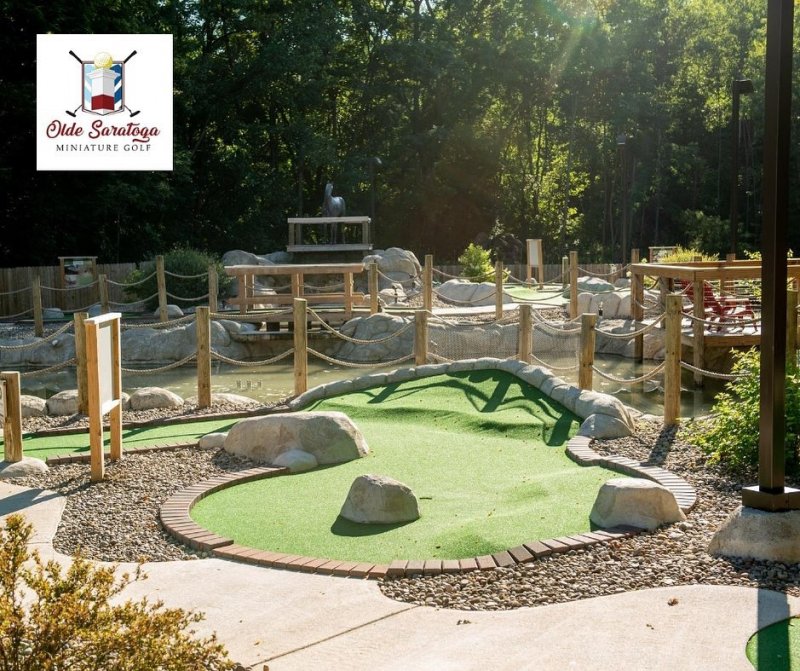 WILTON — The origins of the game may be traced back to the late 19th century of the Victorian Era when the Ladies Putting Club of St. Andrews in Scotland developed a putting course for women golfers.

Today, the art of timing a putt between the swaying limbs of a windmill, over a narrow water-filled ravine or tapping a well-placed ricochet off a historic castle wall takes on a variety of forms in the world of miniature golf, where there are indoor courses and outdoor courses, courses lined of felt or concrete or artificial grass, and challenges awaiting the mini-golfer that range from the natural illumination of a bright afternoon sun or a glow-in-the-dark terrain accented by make-believe monsters.

“A lot of people tell me what a great idea it is, and it’s the first thing they’ve seen since marijuana became legal where they can come out and socially smoke,” Brumley says.

On March 31, Gov. Andrew Cuomo signed legislation legalizing adult-use cannabis.  Over the long-term, the development of an adult-use cannabis industry in New York State under the legislation - which ultimately establishes an Office of Cannabis Management and provides licensing for marijuana producers, distributors and retailers - is projected to reach $350 million annually in tax collections from adult-use cannabis programs, as well as create 30,000 to 60,000 new jobs across the state.

Open seasonally from May until October, Olde Saratoga Miniature Golf Course maintains its normal days and hours of operation aside from the 6-9 p.m. Tuesdays Puff Puff Putt event.

“This is our third year with the mini-golf and it’s all based on the history of Saratoga – each hole has a different piece of Saratoga history - the racetrack, SPAC, the springs, the museums,” says Brumley, among the course that includes a Saratoga “horse” starting gate with spaces for a golf ball to tunnel through, as well as a variety of twists, turns and looping obstacles. The course is tucked in the back of a property on Route 9, which includes other businesses such as a hair studio and a spirits shop.

“Growing up here, I’ve always loved the whole history part of Saratoga. My first job was at the track. SPAC was in my backyard, and we would ride our bikes over there when we were 12 years old and listen outside to the concerts,” he remembered.  While playing miniature golf, kids and adults can enjoy a walk through time.

As for the Tuesday night gatherings, Brumley points out that no cannabis is bought or sold on the premises, people must bring their own.  “Down the road on Tuesday nights we plan on having some live music as it gets bigger - just turning it into a social event, an alternative to the bars for the people who aren’t into drinking,” he says.

Olde Saratoga Miniature Golf Course is located at 556 Maple Ave. in Wilton. To make a reservation for Puff Puff Putt Tuesdays, which is an adults-only event, call or text: 518-450-7006.  The company may also be found on Facebook and online.

Read 7112 times
More in this category: « City Hall to Reopen Monday Stefanik Cosponsor of Essential Caregivers Act »
back to top