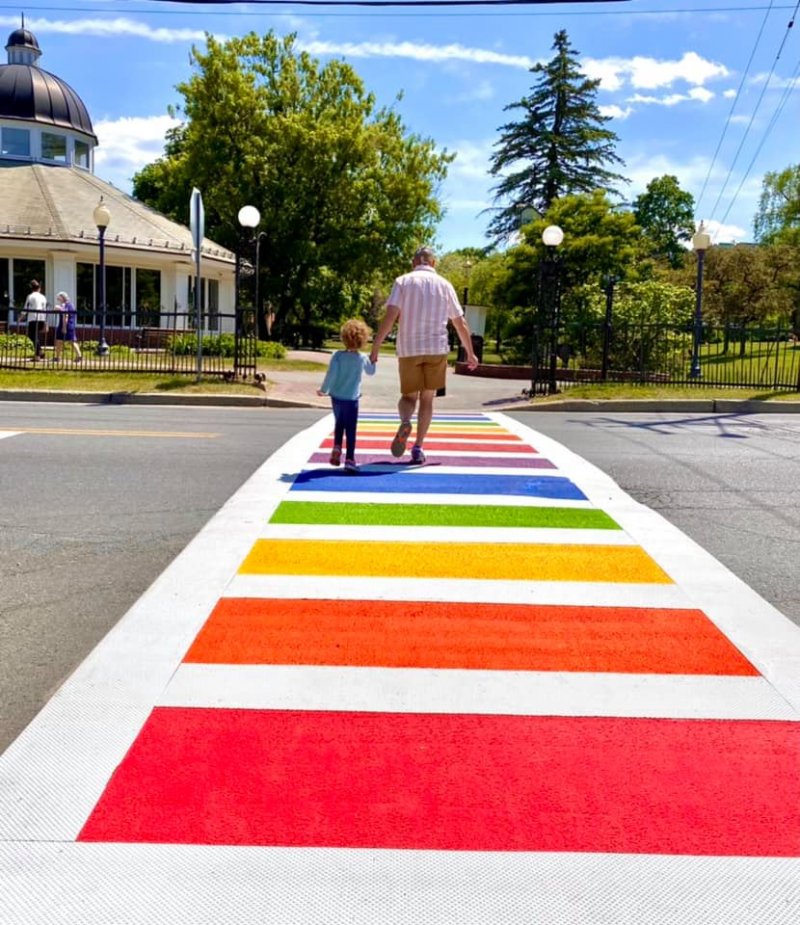 Following in the footsteps of other cities in the state such as Albany, Buffalo and Kingston – which has four painted crosswalks – the rainbow crosswalk was installed to depict a symbol of Saratoga’s continued open and welcoming environment, and ongoing support for the LGBTQ+ community.

A few hours later, however, a local news report pointed to the anticipated permanence of the crosswalk as being in violation of state and federal rules.  City Mayor Meg Kelly told NewsChannel 13 that she had received an email from DOT saying the “non-conforming colors” should be “removed from the crosswalk.”

“It’s standards throughout the country,” Kelly told NewsChannel 13. “When you have a colored crosswalk, it’s not conforming to the state and federal standards.”

Since 2017, DOT crews have been painting a temporary rainbow crosswalk near the Stonewall Inn in New York City, onto the iconic intersection of 7th Avenue and Christopher Street in New York City to celebrate WorldPride.

“It has to be repainted for maintenance because the paint fades, but it’s permanent. And we’re a DOT community, our whole Main Street is a New York State road, so they’ve got their eyes on us in many ways. This crosswalk doesn’t go across a DOT road – it is a locally managed one – but if they had taken issue with it, we would know about it,” said Arianna Basco, assistant to the mayor of New Paltz .

Saratoga Springs Public Safety Commissioner Robin Dalton, who attended the ribbon-cutting ceremony Thursday night, said Friday that the Pride crosswalk on Spring Street was a project first brought to the city a year-and-a-half ago, in January 2020.

“The Public Safety Department did extensive research into whether or not it could be installed in the city, vetting both the design and placement. We followed every step required to ensure for a successful installation and outcome. To date, I have not been contacted by the NYS DOT or been provided anything to warrant readdressing the placement,” Dalton said.

“Saratoga Springs joins a lengthy list of cities and towns across New York State and the country in hosting this symbol of inclusion, celebration and ongoing support for our LGBTQ+ community. As the Public Safety Commissioner, I proudly stand by our crosswalk and remain focused on celebrating pride month and all that it stands for.” City Mayor Meg Kelly did not immediately return a call seeking comment.

More in this category: « Saratoga Springs Preservation Foundation Announces Purchase, Plans to Revive 65 Phila Street Panic at the Pump »
back to top