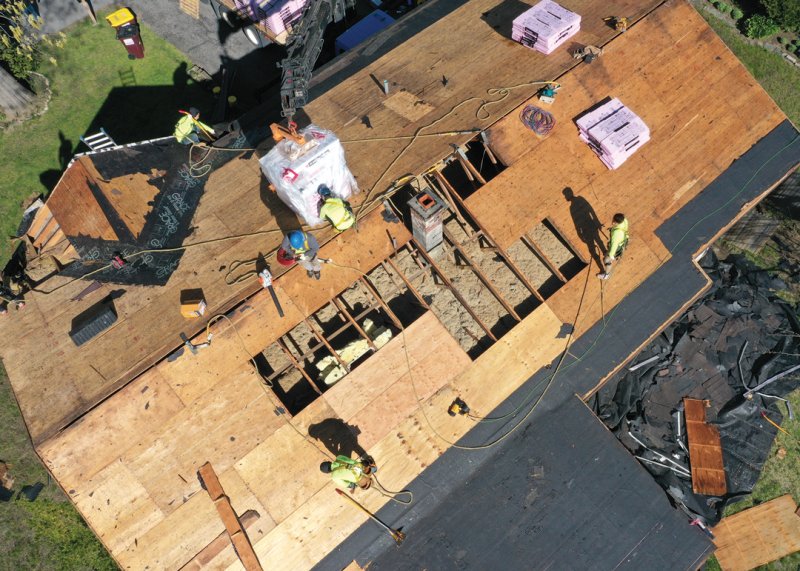 Crew at Work installing a new roof at the home of Saratoga Springs U.S. Navy veteran Leslie Carroll on May 11, 2021. The work is part of the Owens Corning Roof Deployment Project. Photo by SuperSource Media.

“We appreciate what the veterans do for the country, so we like to help out and try to pay them back,” said Jeff Patrick, co-owner of Pinnacle Roofing, a Schenectady-based company that has been taking care of roofs for residential homes and commercial buildings in the Capital Region and Southern Vermont for over 15 years.

The project was established in 2016 by Owens Corning Roofing and its network of independent roofing Platinum Contractors to identify, honor and help protect veterans by installing new roofs. In its first year, 23 roofs were installed for military families across 14 states. To date, more than 250 military members have received new roofs.

Carroll was selected and approved as the recipient for the roof replacement. “This is our second one this year. We did one earlier this year in Corinth for another veteran up there, and we do several a year usually,” Patrick said.

A team of 10 worked to remove the existing roof as well as some plywood due to roof leakage. The work was anticipated to be completed in less than two days.

Owens Corning – which develops, manufactures and markets insulation, roofing and fiberglass composites - runs the Roof Deployment Project. The company donated roofing materials and Pinnacle Roofing donating the labor. The Saratoga Springs project would have cost about $10,000 to $12,000, Patrick said.

For more information on the Roof Deployment Project, or to learn more about getting involved, email This email address is being protected from spambots. You need JavaScript enabled to view it..

Read 894 times
More in this category: « City-Owned Lot Next to Library Approved For Sale Spotlight on Veterans & Community Housing Coalition »
back to top